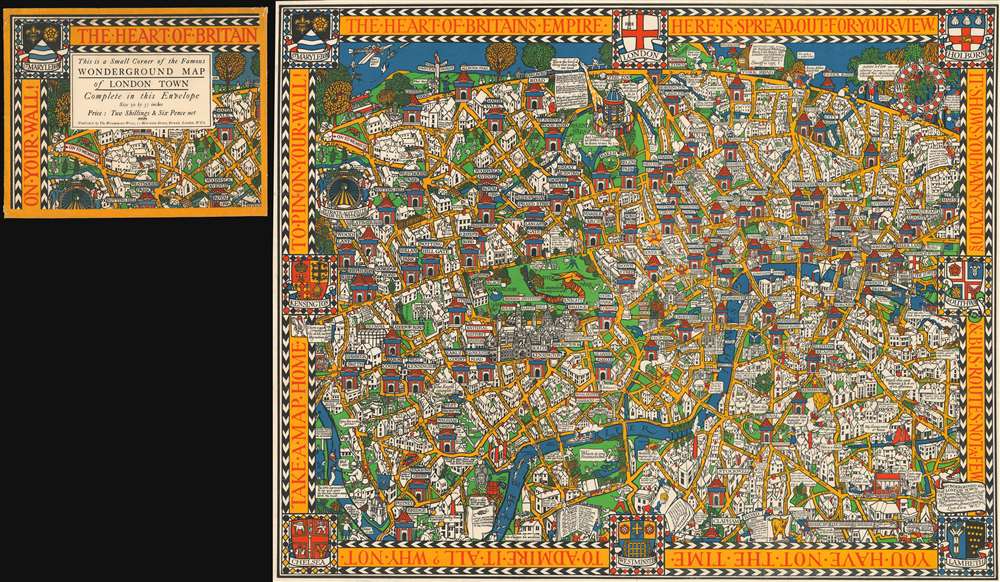 A stunning example of Macdonald Gill's legendary Wonderground Map of London, England, here in the 1927/8 edition, accompanied by its original decorative envelope. This outstanding and colorful pictorial map is credited both with 'saving the network' of the London Underground, and inaugurating the Golden Age of Pictorial Cartography.

In 1914, the London Underground was in trouble. Used almost exclusively by rush hour commuters, the Underground system was virtually abandoned during weekends, evenings, and holidays. The system depended upon income from greater ridership to support maintenance, repair, and expansion. Frank Pick, Commercial Manger for the Underground Electric Railways Company of London, realized that something had to be done. In addition to logistic improvements like better punctuality, train cleanliness, and consistent service, Pick began an advertising campaign to increase off-peak ridership - of which this map was central. Pick reached out to Gerald T. Meynell of Westminster Press to produce a colorful poster illustrating the fun to be had via the Underground system. Meynell in turn contracted Macdonald Gill, who he many have known from the Art Workers Guild, to complete the project. With its bright comic elements and cheerful design, the 'Wonderground Map' lighted the dour all-business image of the Underground, accomplishing its mission of inspiring off-peak travel.

The map is loosely centered on Hyde Park Corner, from which it extends west to Kensington, east to Southwark, north to Camden Town, and south to Clapham Road. Underground stations are highlighted using the Underground's iconic red circle and blue bar banner. All around, the map highlights the fun to be had exploring London, including charming illustrations of Hyde Park, Kensington Garden, Piccadilly Circus, fishing in the Thames, the dog track at Wembly, the Zoo at Regents Park, and more. It also features historical commentary and local humor.

This map was first published in 1914 by Westminster Press. There were several subsequent editions published between 1914 and 1928, most distinguished by minute changes to the upper left corner. In 1924, a 30 x 40 inch version was issued for the 1924 British Empire Exhibition at Wembly, that included a sign reading 'on to Wembly' next to a triangular park bearing an art deco rendition of the British Imperial Lion. Another state (the present example) was issued, measuring 30 x 37 inches, in late 1827 or early 1828, when a dog track was opened at Wembly, wherein the British Lion is replaced by a greyhound. There are also slight color variations between the states. All examples were sold with a distinctive decorative envelope, also included here.