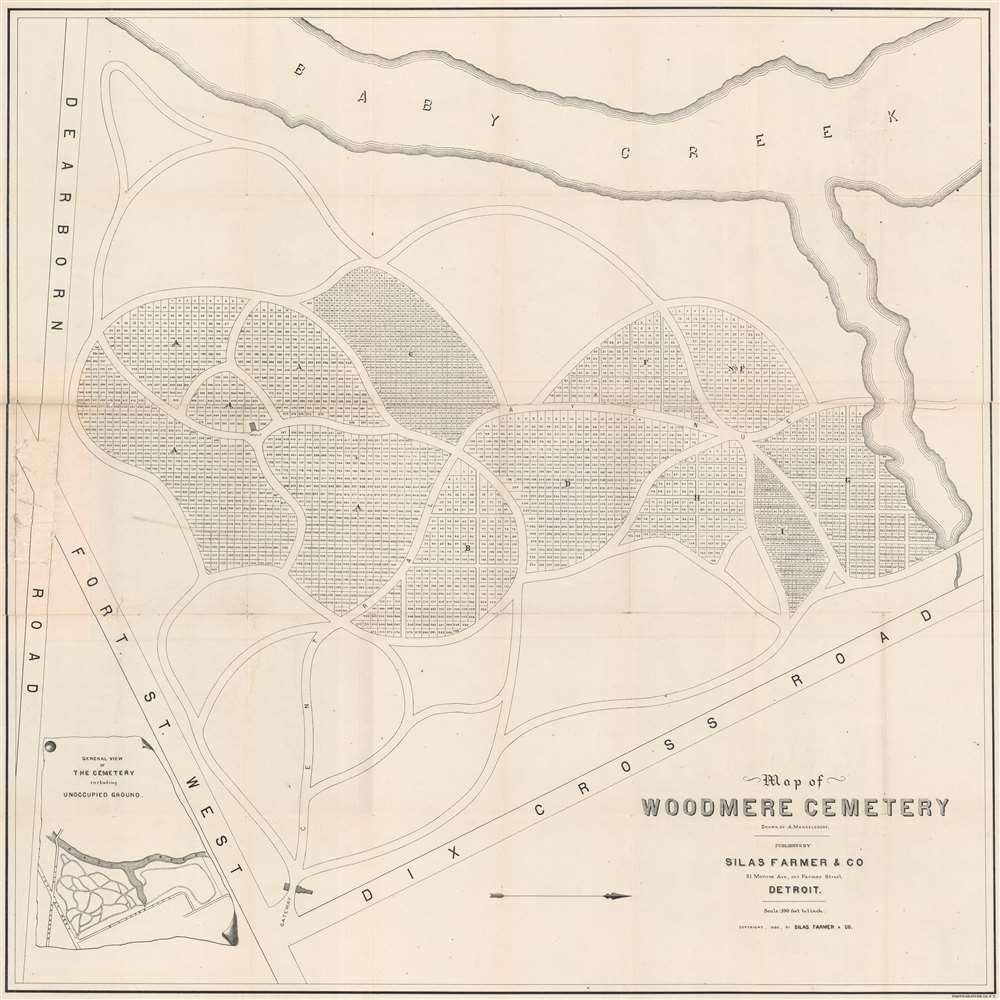 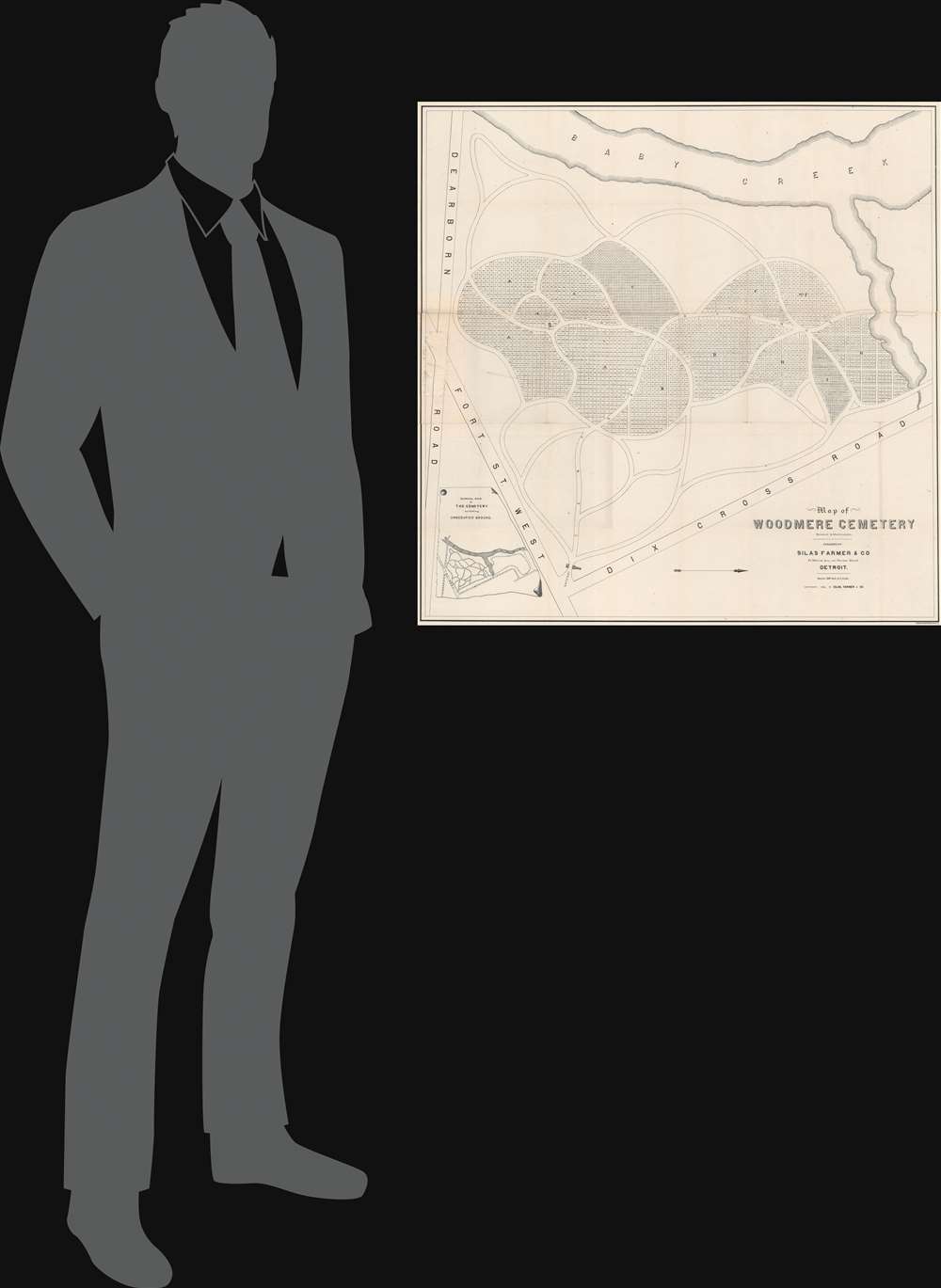 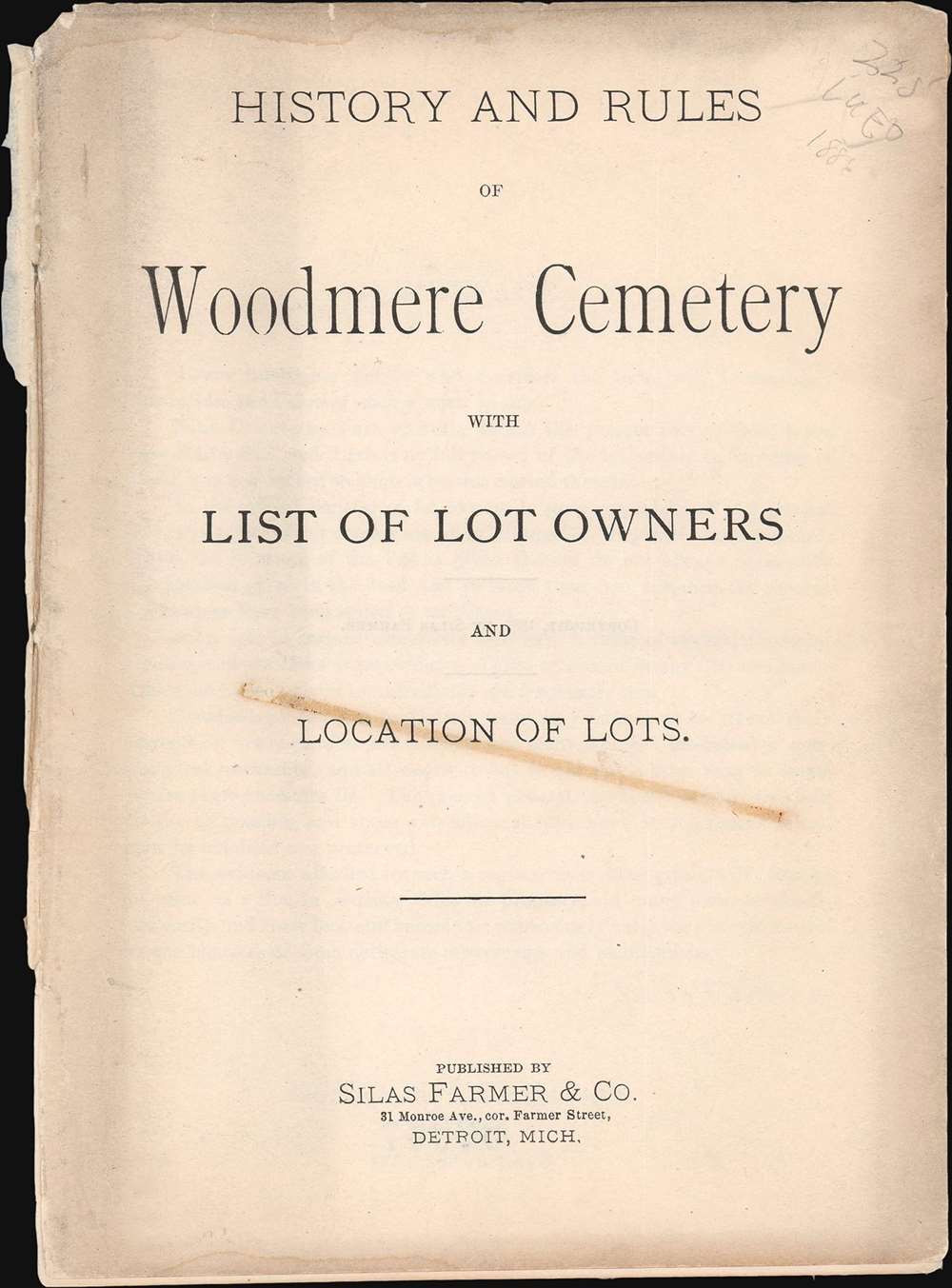 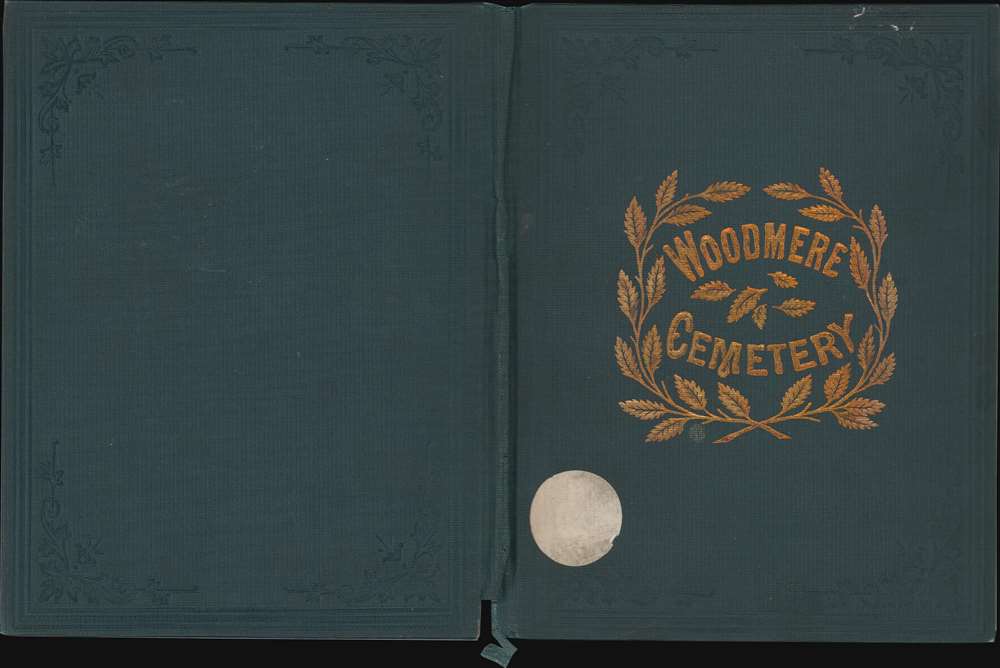 Final resting place for the founders of Buick, Cadillac, and Lincoln.
$500.00

This is an 1886 Silas Farmer map of Woodmere Cemetery in Detroit, Michigan. With west and Baby Creek at the top of the sheet, individual lots in every active or full section are numerically identified. Blank sections are unoccupied. An inset in the lower left illustrates the entire cemetery.

A group of prominent Detroit businessmen came together and founded the Woodmere Cemetery Association on July 8, 1867. They purchased approximately 250 acres outside Detroit to establish a rural cemetery. Designed by Adolph Strauch, construction began in 1868 and the cemetery was dedicated on July 14, 1869. The first burial occurred before the official dedication in March 1868. David D. Buick (the founder of Buick Motor Company), Hamilton Carhartt (the founder of Carhartt Inc. Clothing), Henry M. Leland (founder of Cadillac and Lincoln), and James E. Scripps (founder of The Detroit News) are among the cemetery's notable inhabitants. It is also the final resting place for four victims of the Ford Hunger March on March 7, 1932. The cemetery includes a U.S. Army section, the final resting place of many American Civil War and World War II veterans.

This map was drawn by Albert Mangelsdorf and published by Silas Farmer in 1886. We note two examples cataloged in OCLC, part of the collections at Columbia University in the City of New York and the University of Michigan.

Silas Farmer (June 6, 1839 - December 28, 1902) was an American publisher, historian, and author, and son of the famous cartographer John Farmer. Silas began his career working with his father in the family publishing firm, and continued working for the firm after his father's death. Silas published at least three histories of Detroit, Michigan, entitled The History of Detroit and Michigan (1884), All About Detroit (1899), Guide and Souvenir of Detroit (1891). He died suddenly on December 28, 1902 of an apparent heart attack. Silas married Orpha C. Littlefield in 1868. Learn More...


Ernest Frederick Waldemar Albert Mangelsdorf (December 15, 1856 - January 23, 1925) was a German American draftsman. Born in Germany, Mangelsdorf arrived in the United States in 1883. He worked as a draftsman for Silas Farmer in Detroit throughout the 1880s until at least the early 1890s when he started working for the U.S. government in the Engineeer's office also as a draftsman. Mangelsdorf died of pneumonia in Detroit on January 23, 1925. He married Katherine Leefe (1871 - 1948) with whom he had one daughter, Marie Emilie (1902 - 2002). Learn More...

Good. Backed on archival tissue for stability. Exhibits wear along left side where previously attached to binder.