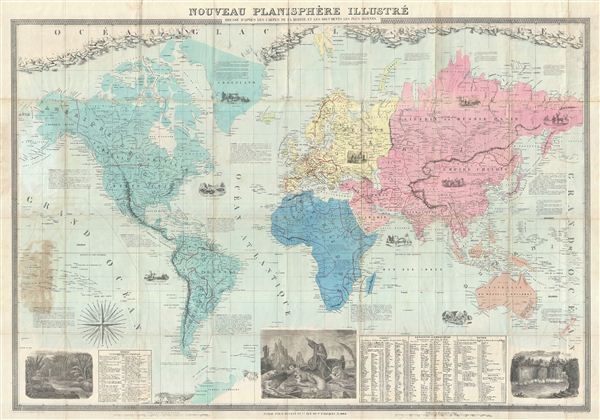 A fine example of Felix Delamarche and 1862 case map of the World. Drawn on a monumental scale, this incredible map covers the known world, from the Arctic Icecap to the just discovered Terres Australes (Antarctica). The map purports to be based upon nautical charts and the most recent marine documents available. Cartographically it reflects some of the most recent discoveries, particularly in the Arctic and Antarctic - for which the 19th century world had a particular fascination. In addition to the standard cartographic elements, Renault has added a host of additional information including cultural notes on the peoples and places depicted and no less than seventeen illustrative vignettes. Some of these include prospectors panning gold in California, a large illustration of arctic explorers besieged by angry polar bears, the Great Wall of China, the Falls of Niagara, a Micronesian House, and the Amazon Rain Forest, among others. Tabular data at the base of the map showcases the distances of the world's capitals form Paris, the lengths of the world's great rivers, the heights of mountains, and a timetable of discovery. Engraved by Felix Delamarche of 45 Rue St. Andre des Arts, Paris for B. Renault and Company, 46 Rue D'Ulm, Pairs. Another map, similar in appearance but with a different title. appeared in 1859.

As a whole this map is an exemplar of a mapping style developed in France during the mid-19th century. Though not properly recognized, this style is marked by a number of cartographic conventions. European, particularly French, map publishers of the period started to take advantage of the sophisticated lithographic techniques being developed at the time. Able to economically print highly detailed maps on a massive scale, French cartographers began illustrating their maps with numerous decorative views and other engravings. Though the inclusion of pictorial elements in maps was nothing new, the style is distinguished from earlier cartographic graphics by its intent. In the 18th century graphic elements tended to be either purely decorative or allegorical. By the early 19th century, through the influence of the comparatively minimalist English cartographic traditions of Cary, Pinkerton and Thomson, graphic illustrations had all but vanished from maps. With the birth of the arm chair explorer in the mid-19th century, illustrative images once again began working their way into maps. These new illustrations however, were pictorial and intended to illustrate natural wonders, foreign cultures, and exotic animals. Examples of this style include the Illustrated Atlas of Englishman John Tallis and, more commonly, the cartography of the French tradition exemplified by Levassuer, Vuillemin, Delamarche.

Very good. Some wear and toning on original fold lines and where original attached to binder. Binder missing. Professionally flattened and backed on archival tissue for stability.
Looking for a high-resolution scan of this?