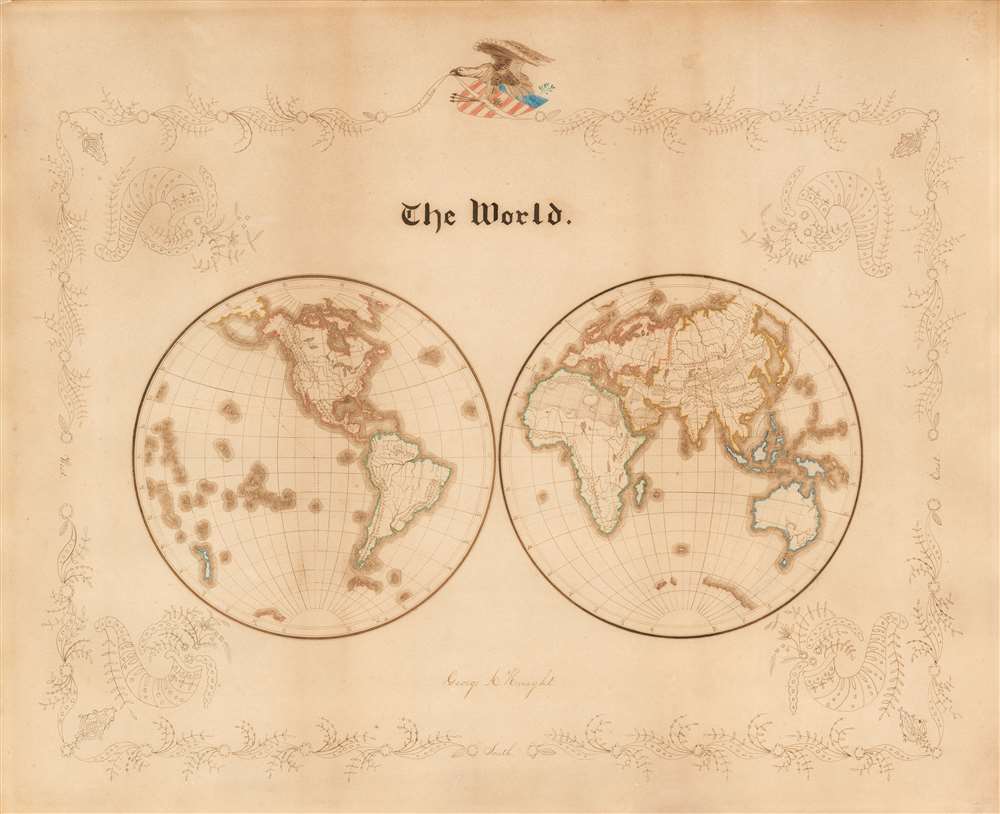 A very attractive manuscript schoolboy map of the world executed by George A. Knight, in or about 1865. The map covers the world on a double-hemisphere projection, with geographical features corresponding very closely to the two separate maps of the Eastern and Western Hemispheres printed in Mitchell's Intermediate Atlas. Specifically, the 1865 editions exhibit similarity and are likely the source used for this map.

An Extraordinary Example of a 'Schoolgirl' map

The map is meticulously drawn, inked, and colored. The border is one of the most finely-executed we have seen on a map of this kind: an exceedingly clear, fine-lined botanical motif, embellished with four cornucopias, and naming three of the cardinal directions. In place of 'north,' above map's title is a variation on the theme of the Great Seal of the United States: a Bald Eagle, with olive branches and arrows astride a shield with the Stars and Stripes, and the 'E Pluribus Unum' motto on a banner held in its beak.

The creator of this map, George A. Knight, gives neither his age nor his home state - something we do often see in this form - the combination of the choice of iconography, the evidence of some affluence indicated by the quality Reynold's Bristol Board paper (Imported from Great Britain) and the access to printed maps all point to our young Mr. Knight being a citizen of one of the New England or Mid-Atlantic states. While the map itself does not contain place names, geographical features are clearly and elegantly delineated. The 'ripple' coastline effects, minimally hachured mountains, and stippled desert areas are clear, communicative and show the map's connection to its Mitchell source. Several distinctive geographical features also tie to the specific Mitchell maps, and help date the piece.

Among the finely-rendered mountain ranges on this map are the Appalachians, (which here extend well into Maine.) While these mountains do not appear on the 1851 Mitchell Western Hemisphere, the 1865 edition does include them, in a form consistent with what we see here.

A feature that appears on this map - shared on Mitchell's Eastern Hemisphere, but not the Mitchell double-hemisphere world - is a curious crescent-shaped body of water in Southern Australia. This is Lake Torrens, an ephemeral endorheic salt lake in central South Australia. Its first sighting by a European was only 1839, and while it appeared on a number of maps its depiction on them is inconsistent, a problem not aided by Lake Torrens' tendency to change in extent, shape, and even existence. The distinctive, upside-down 'U' shape appearing here is one of the visual elements that ties this map to Mitchell's cartography in general, and his two separate hemisphere maps in particular.

Just south of the equator in Eastern Africa are shown three lakes. These correspond to Nyasa, Nyanza, and Tanganyika as they are presented in the 1865 Mitchell Eastern Hemisphere; this is at odds with the contemporaneous Mitchell world map, which shows only one large lake in that position. The 1851 edition of the Eastern Hemisphere does not show these, only one 'Lake Maravi,' likely an early iteration of what David Livingstone would name Lake Nyasa in 1859. Lake Tanganyika and Lake Nyanza - that is to say, Lake Victoria - had first been encountered by European explorers, the British explorers Richard Burton and John Speke, in 1858, and could not have appeared on the earlier iteration of the Mitchell.

While the use of mapmaking in teaching is first seen in Europe, mainly England, the Schoolgirl Map became a peculiarly American pedagogical tool in the first part of the 19th Century, a period in which standards and purposes in women's education were changing. While boys were frequently taught the practical execution of surveys and charts, the production of attractive and informative maps appears to have been primarily the domain of young women. Such maps can be found representing the World, the United States, or more specific maps of individuals states and even towns. These were usually based on generally available reference maps, such as those found in the atlases produced by Carey and Lea, Finley, and - as is the case here - Mitchell.

The goals of these exercises were more far-reaching than teaching geography. Students learned penmanship, each map often using three or more lettering styles. Mapmaking sharpened the retention and recall of factual information. Students were encouraged to take pains in their draftsmanship, and often achieved beautiful flourishes of artistic expression in their maps. But most peculiar to the American iterations of educational mapping was the goal of instilling a sense of civic pride and responsibility. Indeed, the key desired result of the education of girls in the post-Revolutionary-War United States was to prepare for the education of the next generation of American citizens, a patriotic duty which would primarily fall on the shoulders of these young women. Schoolboys were also encouraged to such patriotic displays, as is much in evidence in the present map.

Very good. Manuscript pen and watercolors on blindstamped Bristol Board. Exhibits toning, else excellent for this kind.
Looking for a high-resolution scan of this?