1860 Mitchell Map of the World in Hemispheres 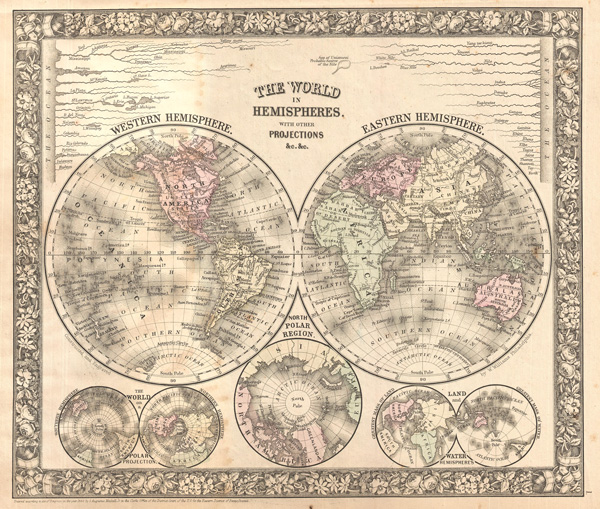 1860 Mitchell Map of the World in Hemispheres

A beautiful example of S. A. Mitchell Jr.'s 1860 decorative double hemisphere map of the world. Upper part of the map depicts the world's great rivers in relative proximity to one another with regard to distance and course. The lower half of the map includes three additional world maps: a hemisphere map on polar projection, a land and water hemisphere projection, and a map of the northern polar regions. Features the floral style border common in Mitchell's atlas maps issued between 1860 and 1869. Prepared by S. A. Mitchell Jr. for inclusion as plate 1 in the 1860 issue of Mitchell's New General Atlas. Dated and copyrighted, 'Entered according to Act of Congress in the Year 1861 by S. Augustus Mitchell Jr. in the Clerk's Office of the District Court of the U.S. for the Eastern District of Pennsylvania.'

Good. A light water stain is evident through the left half of the map - see image. Some marginal foxing. Even overall toning.