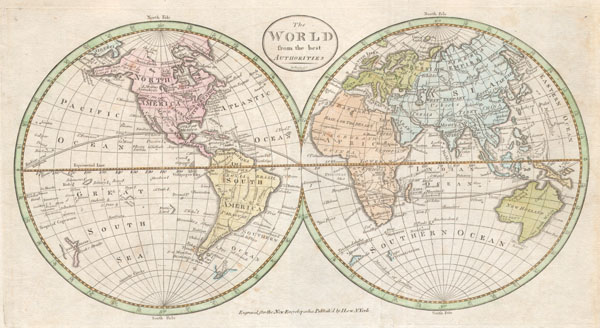 An extremely rare and unusual map of the world. Printed in 1798, this is one of the first maps of the world published for general audiences in the New World. While lacking in the refinement commonly seen in European maps of the same period, this map is worthy of special note by collectors as a fine example of early American cartography. Map depicts the entire world on a hemisphere projection. Geographically offers a few curious anomalies and curiosities. Alaska is expressed in its general form if bloated and inflated in the Aleutian region. Depicts several oddities in the South Pacific including 'Davis's Land and 'Land Seen by Quiros.' 'Davis's Land' appeared on a few charts in the later part of the 19th century and was supposedly discovered by Captain Davis 1722. It was claimed that 'Davis's Land' was a large body of land south and slightly to the east of the Galapagos Islands. Some suppose it to have been Easter Island, while others simply suggest that it was a complete fabrication. Antarctica is shown sketchily as Terra Australis, Cape Circumcision, and the Gulf of Sebastian. In Australia, or New Holland as it is labeled, Tasmania (Van Diemen's Land) is attached to the Australian mainland. In east Asia, map depicts the Sea of Korea, Yeso Island, and mysterious Company's Land. Prepared by Rollinson for John Payne's New Universal Geography and I. Low's New Encyclopedia.

John Payne (fl. c. 1780 - c. 1800) was a little known American cartographer and map publisher working in New York and Philadelphia in the last years of the 19th century. He is a somewhat mysterious figure of which little is known, but his work is important as one of the first examples of American commercial cartography. His most important work is the 1798-9 issue of Payne's New and Complete Universal Geography.

Wheat, James Clements and Brun, Maps and Charts Published in America before 1800; a Bibliography, #40. Phillips (Atlases) 4303-1. Smith, ”Realms of Gold”: A Catalogue of Maps in the Library of the American Philosophical Society, #78b. East Asian Library, Map Collection, EAMC 096. Kerry, Robert, A General History and Collection of Voyages and Travels, page 267-9.
Looking for a high-resolution scan of this?