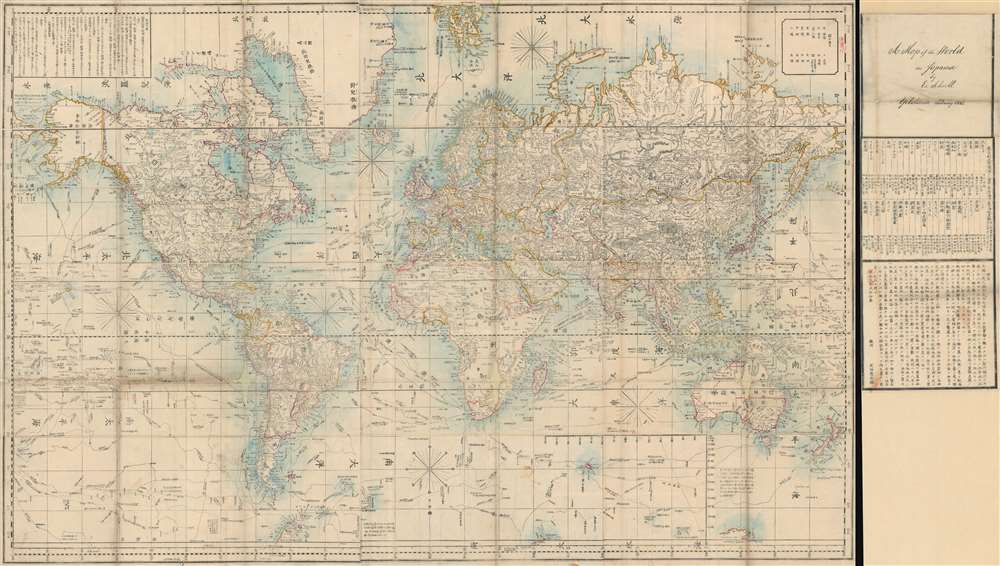 This is a remarkable 1862 Yokohama Published Japanese large format Japanese map of the world by Edward Schnell and Kango Takeda. This map is based upon an English map drawn by John Purdy and others in 1845. Kango Takeda published a Japanese version of the chart in 1858. The map details the world with numerous Japanese notes and annotations, including the routes of prominent explorers.

The present example is an updated version of the Kango Takeda publication revised by the Dutch/German arms dealer Edward Schnell - whose name appears in the title. The title section, usually appended to the map proper, has been detached in this particular case, most likely during an earlier restoration process. The same can be easily re-attached to the map proper, if required.

The OCLC notes only 1 example in the Library of Congress. A second example is held in the East Asian Library at U.C. Berkeley. We have no doubt this map has a fascinating story, which we will attempt to unearth in the coming weeks.

Edward Schnell (c. 1834 - c. 1890) was a Dutch/German arms dealer active in Japan during the middle part of the 19th century/. He traveled there with his brother Henry Schnell following the enforced opening of Yokohama to foreign trade. Edward, who in the 1850s had served in the Prussian Army and spoke Malay, must have arrived in Japan around 1860 and took a Japanese wife. Kawai Tsugonusuke, with whom he had a boy and purchased property, 'Lot No. 44,' in Yokohama. He teamed up with the Swiss watch dealer Perregeux presumably until 1867. Edward and Henry Schnell also served the Aizu domain as military advisors and procurer of weaponry. Edward was granted the Japanese name Hiramatsu Buhei, which inverted the characters of the daimyo's name Matsudaira. Hiramatsu (Schnell) was given the right to wear swords, as well as a residence in the castle town of Wakamatsu, a Japanese wife (the daughter of a Shonai-han retainer), and retainers. In many contemporary references, he is portrayed as wearing a Japanese kimono, overcoat, and swords, with Western riding trousers and boots. Learn More...


Japanese cartography appears as early as the 1600s. Japanese maps are known for their exceptional beauty and high quality of workmanship. Early Japanese cartography has its own very distinctive projection and layout system. Japanese maps made prior to the appearance of Commodore Perry and the opening of Japan in the mid to late 1850s often have no firm directional orientation, incorporate views into the map proper, and tend to be hand colored woodblock prints. This era, from the 1600s to the c. 1855, which roughly coincides with the Tokugawa or Edo Period (1603-1886), some consider the Golden Age of Japanese Cartography. Most maps from this period, which followed isolationist ideology, predictably focus on Japan. The greatest cartographer of the period, whose work redefined all subsequent cartography, was Ino Tadataka (1745 -1818). Ino's maps of Japan were so detailed that, when the European cartographers arrived they had no need, even with their far more sophisticated survey equipment, to remap the region. Later Japanese maps, produced in the late Edo and throughout the Meiji period, draw heavily upon western maps as models in both their content and overall cartographic style. While many of these later maps maintain elements of traditional Japanese cartography such as the use of rice paper, woodblock printing, and delicate hand color, they also incorporate western directional orientation, projection systems, and structural norms. Even so, Japan's isolationist policy kept most western maps from reaching Japan so even 19th century maps appear extremely out of date. The early Japanese maps copy the great 1602 Chinese world map of the friar Matto Ricci. After Shiba Kokan's 1792 map, most Japanese cartographers used Covens and Mortier's 1730 copy of Jaillot's 1689 double hemisphere work as their base world-view. In 1862 Seiyo Sato based a new world map on Dutch sources dating to 1857, thus introducing the Mercator projection to Japan. By the late Meiji Era, western maps became far more common in Asia and Japanese maps began to follow modern conventions. Learn More...

Very good. Some loss over fold intersections. Minor worm holes. Some wear and foxing along original fold lines. Minor spotting at places. Professionally flattened and backed with archival tissue. The title is usually appended to the right of the map, but in this case is detached. Can be reattached easily.