1851 Black Map of Ancient World and the Empire of Alexander 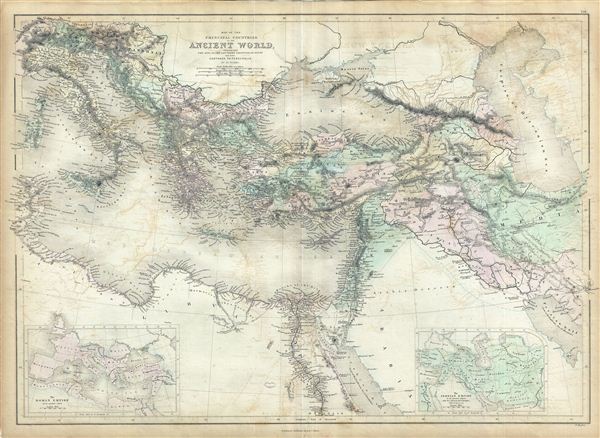 1851 Black Map of Ancient World and the Empire of Alexander

This is a fine example of Adam and Charles Black's 1851 map of the principal counties of the Ancient World. The map depicts part of the empire of Alexander the Great and covers from modern day Italy south as far as egypt and from Corsica to Caspian Sea. An inset map in the lower left quadrant depicts the Roman empire in its greatest extent and another map in the lower right quadrant features the Persian empire in its greatest extent, divided into its Satrapies. Hughes engraved this map to illustrate the conquests of the Macedonian King Alexander III, called ‘the Great,' conqueror of the Persian empire and at just thirty, ruler of one of the largest empires in history. Alexander the Great was undefeated in battle and is considered one of the most successful military commanders of all time. Various towns, cities, mountains, rivers, oases and several other topographical details are noted with relief shown by hachure. This map was engraved by William Hughes and issued as plate no. LIX in the 1851 edition of Black's General Atlas of the World.