1854 Spruner Map of the World showing the British Empire 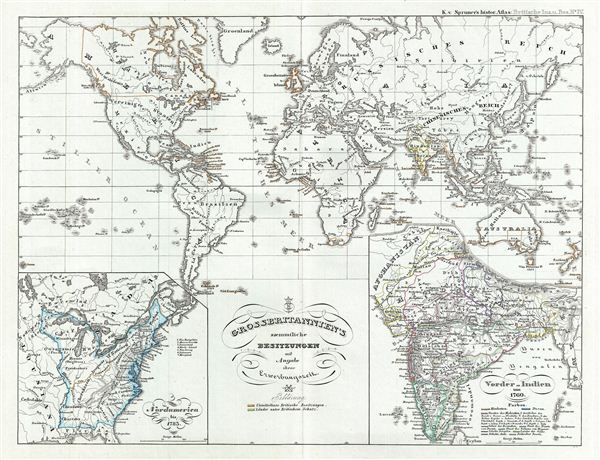 1854 Spruner Map of the World showing the British Empire

This is Karl von Spruner's 1854 historical map of the World detailing the British empire, of which it was once factually said, 'the sun never sets.' The map covers the entire world with Britain's territorial and colonial borders outlined in color. Two inset maps on the lower left and right corners detail North America in 1783 and India in 1760, respectively. Between 1756 and 1763, Britain defeated France in the Seven Year's War. This victory over France made Britain the world's most powerful maritime nation. The whole is rendered in finely engraved detail exhibiting throughout the fine craftsmanship of the Perthes firm. Prepared by Karl Spruner for publication as plate B IV in the second edition of Justus Perthes' 1854 Historich-Geographischer, Hand-Atlas zur Geschichte der Staaten europa's vom Anfang des Mittelalters bis auf die Neueste Zeit.