1866 Mitchell Map of the World in Hemispheres 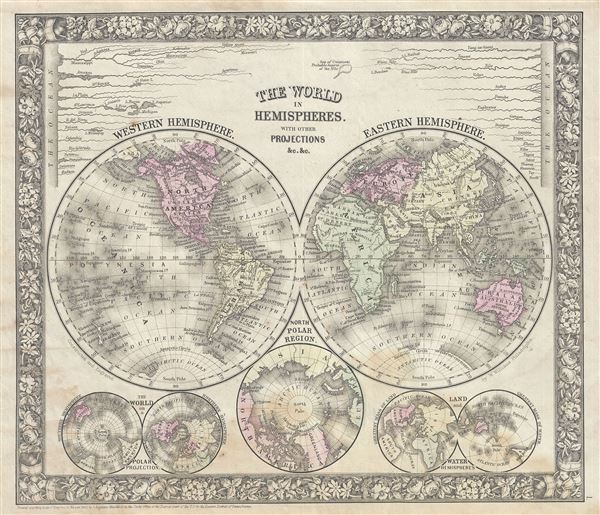 1866 Mitchell Map of the World in Hemispheres

This is a beautiful example of S. A. Mitchell Jr.'s 1866 decorative double hemisphere map of the world. Depicts the world on a hemisphere projection. The upper part of the map shows the rivers in relative proximity while the lower half features three additional world maps, a hemisphere map on a polar projection, a land and water hemisphere projection, and one of the northern Polar Regions. Countries are named but boundaries are not defined. The map notes important rivers, cities, islands, mountains and other features and is color coded according to continents with elevation rendered by hachure.

One of the most attractive American atlas maps of this region to appear in the mid-19th century. Prepared by S. A. Mitchell Jr. for inclusion as plate 1 in the 1866 issue of Mitchell's New General Atlas. Like many American map publishers of this period, Mitchell did not regularly update his copyright, consequently this map is dated and copyrighted to 1860: 'Entered according to Act of Congress in the Year 1860 by S. Augustus Mitchell Jr. in the Clerks Office of the District Court of the U.S. for the Eastern District of Pennsylvania.'