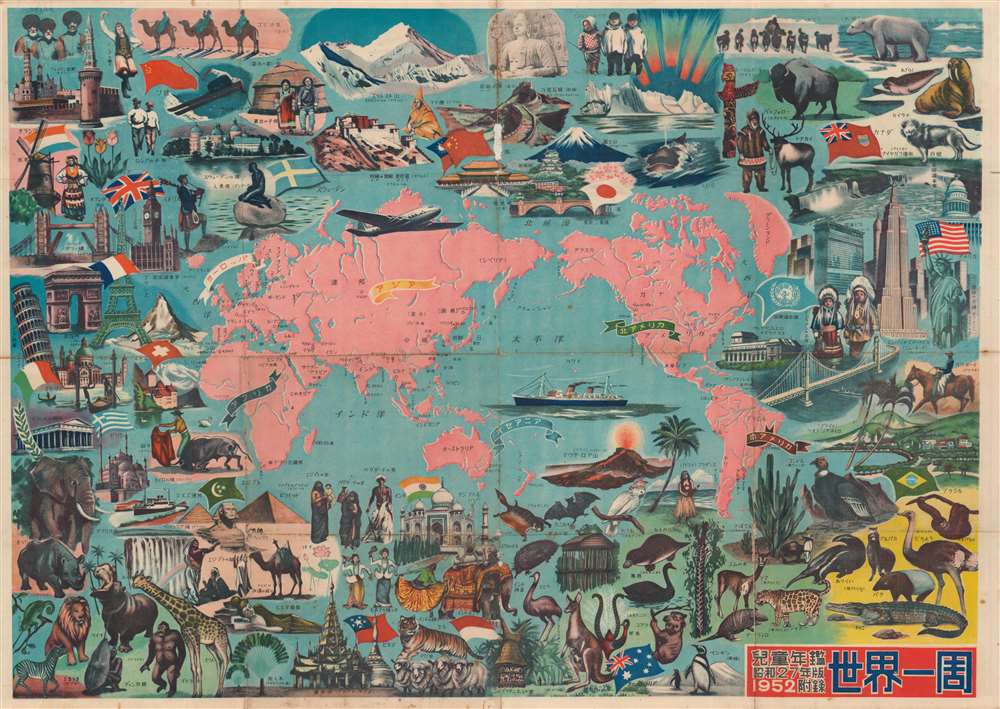 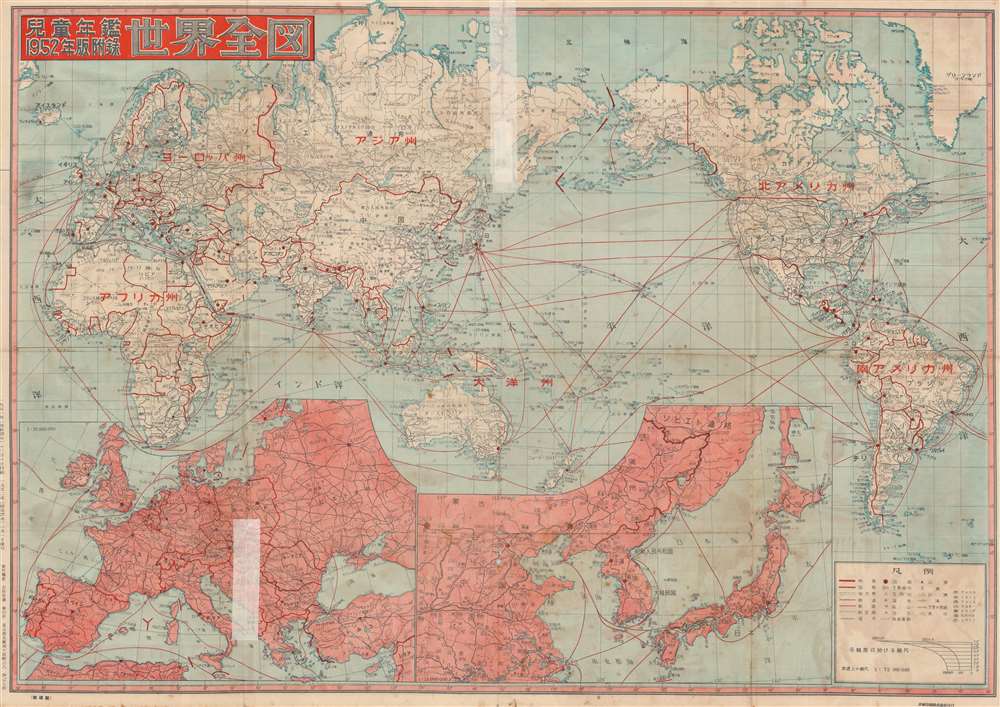 Internationalism in Japan as it regained its independence after WWII.
$1,200.00

Issued in the 1952, the year Japan regained its sovereignty after WWII, this is a rare double sided world map published for Jidō Nenkan (兒童年鑑, Children's Yearbook). They demonstrate the inculcation of a new spirit of internationalism in Japan, especially among children, after the nationalist militarism and destruction of the war years.

The map on the front (recto) shows the continents surrounded by illustrations representing various places and nations. There are several interesting features worth noting.

In China, the flags of both the Republic, which by this point had fled to Taiwan, and People's Republic appear. There is also a drawing of a Tibetan Lama (perhaps the Dalai Lama) and the Potala Palace in Lhasa (Tibet had just fallen under Chinese occupation). In addition, there is depiction of Mongolian children in front of a ger (yurt) and camels crossing the Gobi Desert, images that had a special salience given Japan's late 1930s quasi-colonization of Inner Mongolia.

A significant, even inordinate, amount of attention is paid to Burma, which held a special place in Japanese wartime propaganda due to the importance of Buddhism in Burmese culture, the elation at having captured a major British colony, and the frequency of news about Burma as it was one of the main front lines of the war in Asia, one where Japanese troops performed quite well. Perhaps more importantly, the book The Burmese Harp (ビルマの竪琴), published in 1946 by Takeyama Michio, became one of the most popular children's books of the U.S. Occupation era, using the context of wartime Burma to emphasize Buddhist virtues and provide hope for the postwar period.

The representation of the U.S. is also very telling, including Manhattan skyscrapers, cowboys, Native Americans, and Niagara Falls. This reflection of the popular imagination in Japan about the U.S. as a land of megacities, natural beauty, and the Wild West, was likely influenced by the flood of American popular culture, especially Hollywood films, during the occupation.

The map also includes illustrations of the Golden Gate Bridge and the San Francisco War Memorial Opera House, where much of the 1945 San Francisco Conference was held, inaugurating the United Nations, and where the Treaty of San Francisco was drafted and signed in 1951, officially ending the Pacific War nearly six years after hostilities had ceased. Japan applied to join the United Nations immediately in 1952 and aspired to join as quickly as possible, positioning itself as a neutral intermediary in disputes (its membership was delayed due to Soviet opposition until 1956).

The images used for Japan are fairly revealing as well. Major mainstays of national symbolism in the postwar period are here, including Mt. Fuji, cherry blossoms, and the Himeji Castle. However, the Nijubashi Bridge at the front of the Imperial Palace is also present, a popular tourist site but also perhaps an oblique, euphemistic reference to the imperial family. The map also uses the flags and names of newly independent countries, including those in Southeast Asia, such as Indonesia and Burma, that Japan had occupied during the war and, in a way, helped to make independent.

The map on the back (verso) is a more conventional world map (1 : 75000000) with two insets at bottom showing East Asia (1 : 50000000) and Europe (1 : 20000000) in greater detail. The legend notes the usual features such as borders, railways, and shipping routes, but also includes famous sites (名所地) and hot springs (溫泉), some natural resources (oilfields and mines, only shown on the inset map of East Asia, another reverberation of Japan's wartime economy and culture), and the renditions of major foreign countries' names in kana. As the Korean War was ongoing, the Korean Peninsula is shown divided at the 38th parallel with capitals in Seoul and Pyongyang. The main map also divides the Soviet Union to emphasize the distinction between Europe and Asia.

Reengaging with the World

These maps date to 1952, the year that Japan's sovereignty was restored following the formal end of the U.S. Occupation. One of the main objectives of the occupation had been to eliminate militarism and nationalism from public life after decades of propaganda and indoctrination through the media and educational system. In this, the occupation authorities had allies among teachers, especially the Japan Teachers Union, and writers who produced books and magazines for children. After the horrific destruction caused by the war, even stalwart conservatives saw the value in promoting internationalism and pacifism among Japanese youth to lay the groundwork for Japan's future engagement with the outside world.

A popular slogan during this era that was aimed especially at children was 'Construct a Nation of Peace' (和平國家建設). However, perhaps unconsciously, this slogan echoed use of the word 'construction' from wartime propaganda. Similarly, internationalism and the rhetoric of world peace and cooperation were not new. They had been common in Japan after World War I (as in many other countries), when Japan began its descent into militarism and hypernationalism. In the wartime context, 'peace' and 'construction' (or often 'reconstruction') were the watchwords of the Greater East Asia Co-Prosperity Sphere. The use of similar or identical rhetoric in very different contexts helps to explain why many of Japan's political and economic leaders, not to mention common people, who were deeply implicated by Japan's wartime activities could also champion Japan's postwar internationalism.

These maps were also made as Japan was emerging from the economic stupor of the immediate postwar period and launching into the beginning of the 'economic miracle' that would last until the early 1990s. The economy was aided significantly by U.S. military contracts, especially for equipment to be used in the Korean War. Thus, even as Japan was demilitarized, roughly five years after the end of World War II it was deeply (if indirectly) involved in a military campaign in its most significant former colony.

Jidō Nenkan (兒童年鑑) and Children's Education in the Postwar Period

Jidō Nenkan was published by Nobarasha (野ばら社, a still extant publisher in Tokyo) from 1933 until 1957. The yearbooks contained beautiful color illustrations and served as a sort of combined atlas and almanac of Japan and the world for children. Unsurprisingly, a significant shift is evident between the wartime and postwar yearbooks. For example, maps in the wartime yearbooks were titled using phrases such as 'new order,' a reference to the territorial gains and growing power of Japan, Germany, and Italy. Postwar yearbooks reflect the prevailing attitude of the occupation and postwar period: pacifism, tolerance, and curiosity about outside world.

These maps were published as appendixes to the 1952 edition of Jidō Nenkan. The recto map does not have any additional publication information, but the verso map notes that it was made by Shimura Bunzō (志村文藏), the founder of Nobarasha (野ばら社), printed on December 10, 1951 by the Akagi Printing Co. (赤城印刷株式會社), and distributed January 1, 1952 by Nobarasha. The 1952 edition of Jidō Nenkan is only known to be held by the National Diet Library and is very scarce to the market.

Jidō Nenkan (兒童年鑑; 1933 - 1957) was a children's yearbook published by Nobarasha (野ばら社). Publication ceased in the last years of the war and the early years of the U.S. occupation of Japan, but continued in 1949, only to cease permanently after 1957. Learn More...


Nobarasha (野ばら社; October 20, 1929 - present) is a Japanese publisher, primarily in the fields of calligraphy, poetry, design, and painting. Early in the company's history, it focused on publishing yearbooks and dictionaries, especially for children. Learn More...


Akagi Printing Co. (赤城印刷株式會社; fl. c. 1951 - 1953) was a Japanese printer that worked in conjunction with the publisher Nobarasha (野ばら社) in the early postwar period. A company by this name exists today in Tokyo, but it is unclear if it is the same company. Learn More...

Very good. Some wear and minimal loss along the fold lines.