1892 Rand McNally Map of the World on Mercator's Projection 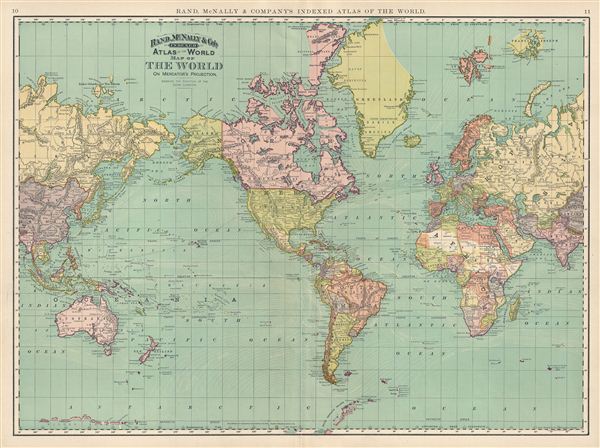 1892 Rand McNally Map of the World on Mercator's Projection

This is a beautiful example of Rand McNally and Company's 1892 map of the World on Mercator's projection. Depicts the entire world centered on North and South America and offers a fascinating snapshot of the world during a period of rapid globalization and discovery. The Antarctic exploration was still in its infancy, though parts of the Antarctic coast line are noted to the south of Australia and off the coast of Tierra del Fuego. Vast stretches of unmapped territory and speculative cartography fill central Asia, South America, Canada, Africa and Australia. Throughout several ocean currents are mapped and routes noted. Color coded according to countries and regions, the map identifies numerous cities, as well as noting various rivers, mountains and other topographical details. Relief shown by hachure. This map was issued as plate nos. 10 and 11 in the 1895 issue of Rand McNally and Company's Indexed Atlas of the World - possibly the finest atlas Rand McNally ever issued.