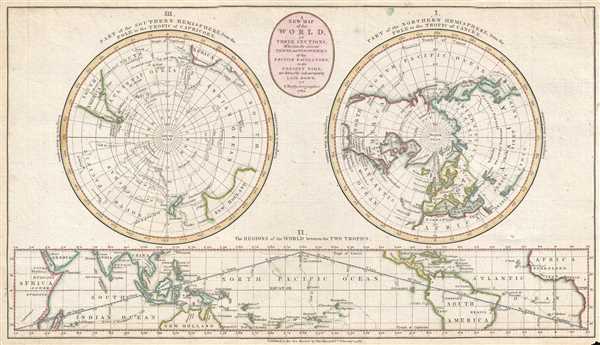 An unusual map of the world in three sections - mapping the South Pole, North Pole, and the regions between the Tropics.

This is a 1782 John Bayly map of the world in three sections. Two of the three sections are circular, hemispheric projections depicting the world from the North Pole and the South Pole, respectively. The third section is a strip map situated along the bottom of the map depicting the world between the Tropic of Cancer and the Tropic of Capricorn, as if it had been rolled out on a flat surface.

Of the two circular projections, the one on the left illustrates from the South Pole to the Tropic of Capricorn. Southern South America, including Tierra del Fuego, South Africa and the Cape of Good Hope, and southern Australia and New Zealand are all depicted. The routes of Captain Cook and Tobias Furneaux are traced throughout this map, with each route labeled with the explorer (or explorers) names and the year. Several annotations near the Antarctic circle note the presence of 'islands and fields of ice' along with one stating 'firm fields and vast mountains of ice'. The second circular projection, situated on the right, depicts from the North Pole to the Tropic of Cancer and includes all the land masses of the Northern Hemisphere. Most of the American colonies, soon to be the United States of America, are labeled, as are the Bahamas and the major European countries. Egypt, Morocco, Algiers, and Tripoli are labeled in Africa, while Japan, China, Tibet, India, and the Russian Empire are the only entities identified in Asia. The North Pole is nebulously mapped, as with the South Pole on the previous map, and curiously Greenland and the United States are connected, enclosing Baffin's Bay. Some explorer's routes are illustrated in the Pacific, notably those of Captain Cook, as well as Lord Mulgrave's 1773 expedition to the North Pole in the North Sea.

The map illustrating the world between the Tropic of Cancer and the Tropic of Capricorn is situated below the two circular projections along the bottom border. The majority of Africa and South America are included here, as is Central America, the West Indies, southeast Asia, and northern Australia. Cook's routes are also noted here, as is his death in Hawaii (O-why-hee) in 1777. The zodiac is also included here, with each symbol labeled and their dates included.

This map was created by John Bayly and published by Harrison and Company in 1782.

John Abraham Bayly (c. 1730 - c. 1794) was an English engraver. Born around 1730, Bayly apprenticed with Thophilus Spendelow on October 16, 1745. After Spendelow died, Bayly finished his apprenticeship with his widow Hannah, which ended on December 3rd, 1755. He was jailed in Ludgate Prison for debt on September 25, 1761 and was most likely the John Bayly who testified as the principal witness in a forgery trial on October 17th 1783.