1733 Busch Map of the World in Hemispheres 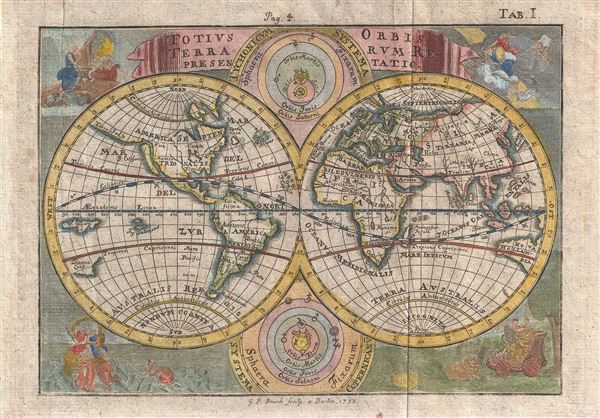 1733 Busch Map of the World in Hemispheres

Scarce miniature map embracing the prevalent cartographic myths of the early 18th century. Does this map show the Madagascar pirate colony of Libertalia?

An extremely scarce 1733 German miniature map of the world engraved by Georg Paul Busch. Presenting the world on a hemispherical projection, this map embraces many of the cartographic myths prevalent in the early 18th century. Tucked between the hemispheres are two diagrams of the solar system - the Tychonicum Systema, as delveoped by astronomer and alchemist Tycho Brahe and the Systema Copernicanum, as described by Nicolaus Copernicus. The map is surrounded by allegorical representation of the four elements.

Most prominently, this is also one of the last maps to represent California as an Island. The idea of an insular California first appeared as a work of fiction in Garci Rodriguez de Montalvo's c. 1510 romance Las Sergas de Esplandian, where he writes

In the Pacific, Van Diemen's Land is a near continent sized landmass presumable attached to Nova Hollandia (Australia) which peaks out form the southeastern quadrant of the Eastern Hemisphere. The Solomon Islands, following the discoveries of Pedro Fernandez de Quieros (1563?-1615) and Alvaro de Mendana (1542?–1595), are over large.

The continent of Africa is presented according to common convention of the period. The Nile extends southwards from the Mediterranean in the Two-Lake Ptolemaic model. The Niger extends inland from the Atlantic where it mysteriously joins the Nile - a popular supposition. Just to the east of Madagascar an anchor identifies safe anchorage, the only such to appear on this map. This may indirectly reference the supposed pirate colony of Libertalia, a utopic anarchist republic founded by pirates. Libertalia is generally thought to be a myth, but around this time a pirate colony did exist in Eastern Madagascar on the island of Ille Sainte Marie, where modern explorers have discovered the shipwreck of Captain Kidd's lost ship, among many others.

This map was engraved by Georg Paul Busch in 1733. This example was issued in Berlin for M. Benjamin Hederichs 1742 Historischen. Today this map is exceedingly scarce.

Georg Paul Busch (???? - 1756) was a German engraver active in Berlin in the early 18th century. Busch primarily engraved portraits and landscape views. His corpus of maps is extremely limited. Busch is better known for his apprentice Georg Friedrich Schmidt, who surpassed the work of his teacher in all ways. Learn More...