1916 Saussine Pictorial Broadside Game Board of World War I 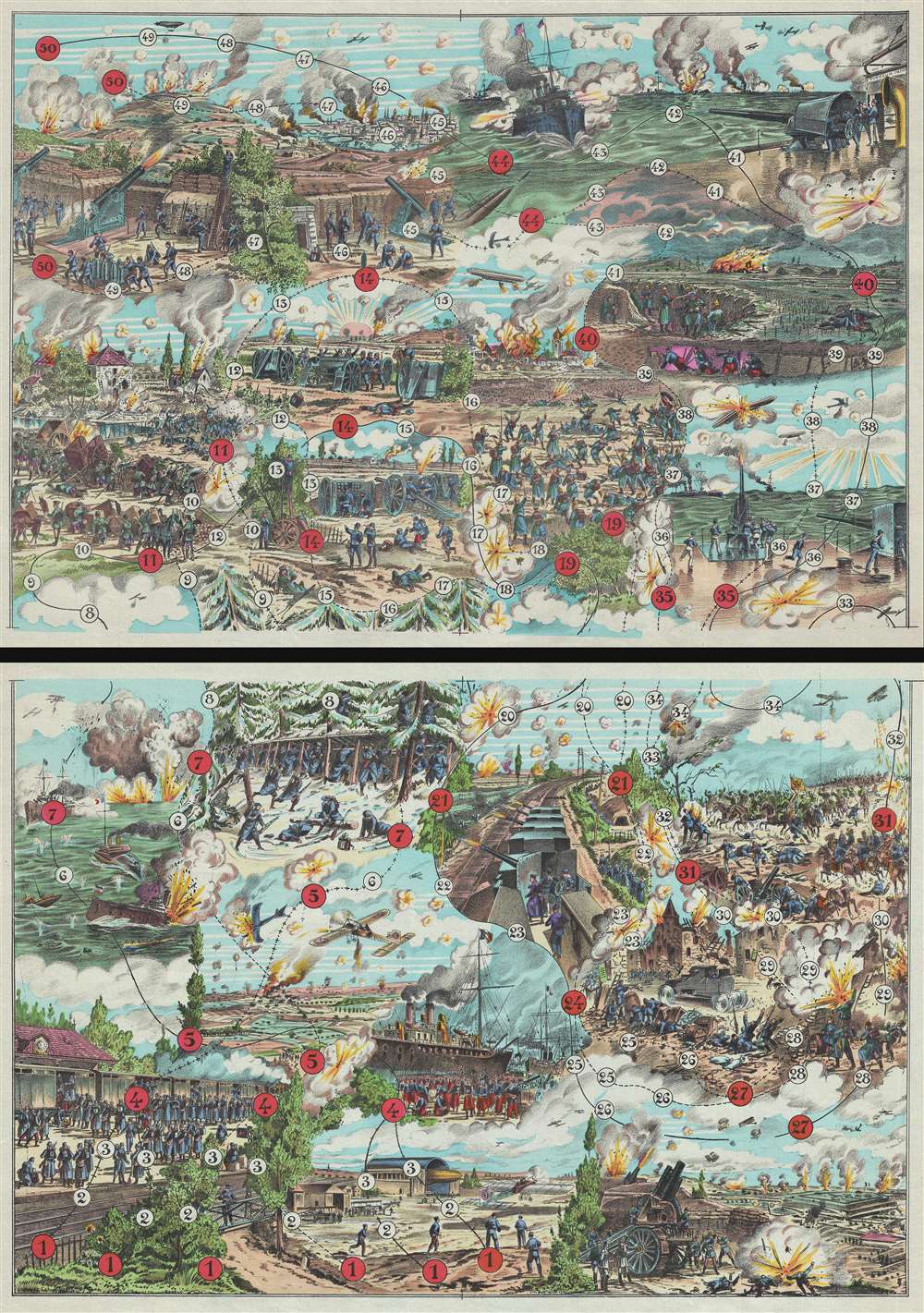 1916 Saussine Pictorial Broadside Game Board of World War I

An extremely rare and incredibly detailed pictorial broadside game board of World War I.
$1,100.00

These are two original unjoined halves of a c. 1916 Léon Saussine pictorial map or game board of World War I. This map serves as the game board for a jeu de parcours (journey game) through the battlefields of World War I. The game depicts numerous battle scenes throughout the various fronts in the war, including naval combat and combat against the Ottoman Empire in the Middle East. Many of the scenes focus on the technological advancements made during the war, such as deployment of troops by rail, enormous artillery pieces, artillery installed on trains, armored vehicles, air-to-air combat, and aerial bombardment (by zeppelin as depicted on the board).

World War I was the first time aircraft had been used in combat, although throughout most of the way aircraft played a larger role in reconnaissance than in hostile action. This meant that military units needed to be created to use this new technology. These units were known as escadrilles, and were made up of pilots and ground crew who maintained the aircraft. An escadrille is depicted near the bottom margin of the lower sheet. Another of the inventions that had a decisive impact on the outcome of World War I is the submarine. Unrestricted submarine warfare against shipping was a highly contentious issue during the war, and the sinking of the oceanliner Lusitania by a German submarine led to the United States entering the war. One of the scenes of naval combat depicts a submarine firing a torpedo at another ship. Another scene, this one on land, depicts Allied soldiers digging a tunnel under the German lines to plant explosives.

The map/game was published by Léon Saussine, founder of Jeux Saussine (Saussine Games) in Paris around 1916. The map is two separate sheets, and the only other example that we have been able to locate, in the collection of the Musée National des Arts et Traditions Populaires in Marseille France, is in the same state. This suggests that the game was never issued as a complete game board. An extremely rare piece and a once in a lifetime collecting opportunity.

Léon Saussine (unknown-1896) founded Saussine editions in 1860 and directed the company until his death in 1896, when he was succeeded by his widow and his sons. Saussine games published several types of games, including magnetic games. In 1878 Léon Saussine exhibited at the Exposition Universelle (World's Fair) in Paris.