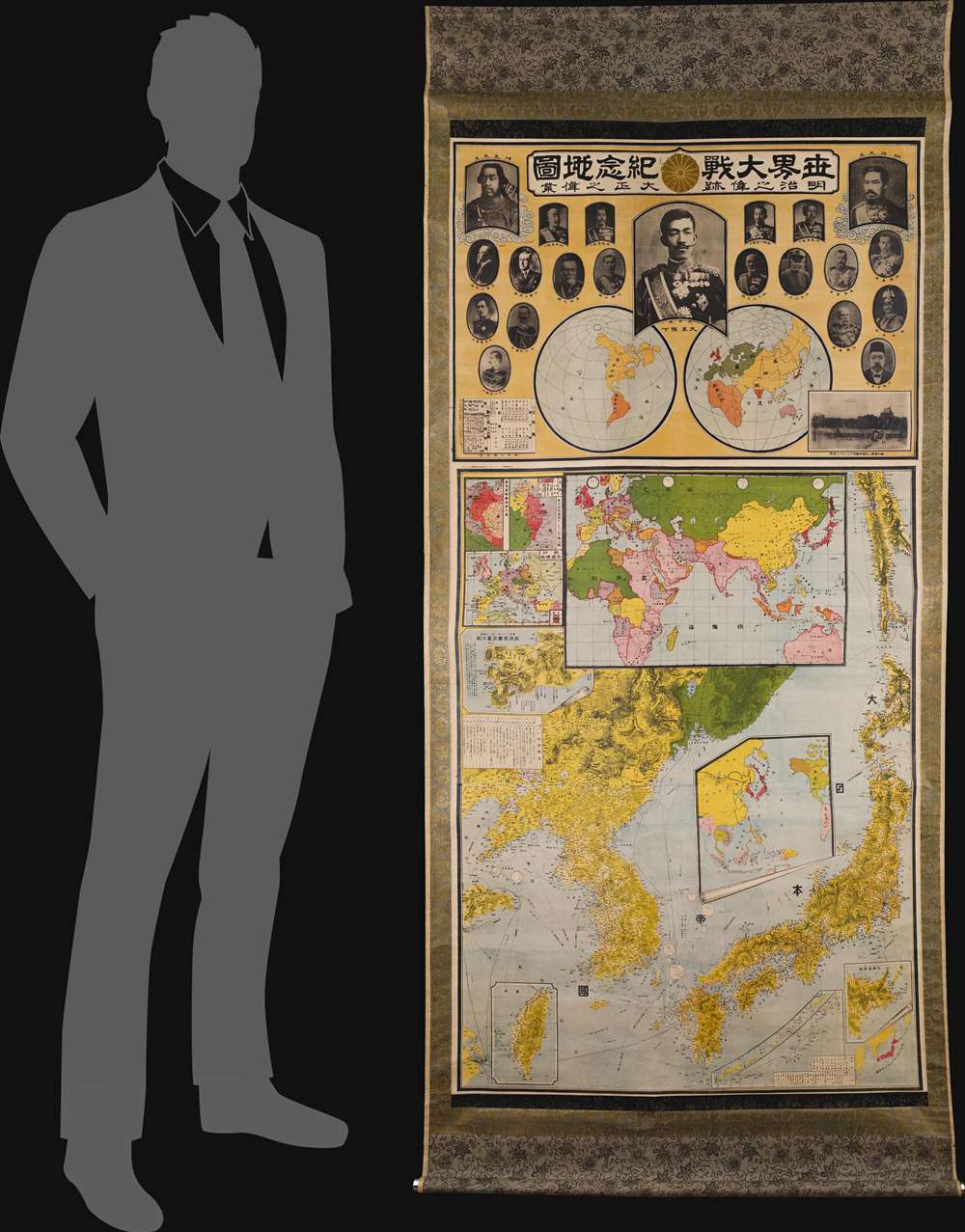 A rare, exceptional, and impressively proportioned c. 1919 (Taishō 8) Japanese propaganda map prepared to celebrate Japanese achievements in World War I (Jul 28, 1914 - Nov 11, 1918) and the Russo-Japanese War (Feb 8, 1904 - Sep 5, 1905). During the course of these two wars, a period of less than 20 years, Japan fulfilled the ambitions of the Emperor Meiji and his successor Taishō, transforming itself from a backward and isolated nation into an industrial and military power writ large on the world stage.

The Leaders of World War I

Aside from heads of state, at top-left is Emperor Jimmu, the legendary first emperor of Japan. A number of Japanese military leaders of the Meiji and Taisho eras, many of whom sat on the powerful Privy Council, surround the Taisho Emperor at top, including Yamagata Aritomo (山縣有朋), Tōgō Heihachirō (東郷 平八郎), and Ōyama Iwao (大山巌).

The lower part of the map illustrates the East Asian theater during the two wars. The focus is on the Empire of Japan, including Korea and Taiwan, and wartime activity primarily in the vicinity of Manchuria, Liaodong Peninsula, and Shandong Peninsula, China. Although Japan was a minor player in World War I, with action primarily confined to East Asia, its participation in the war rapidly elevated it to a major world power. As the title suggests, the war fulfilled the great Meiji dream of reimagining Japan as a modern industrial power. Japan served as an Allied supply house throughout the war, leading to a booming wartime economy. At the same time, it leveraged its participation in the war to seize control of German colonies in China, particularly Qingdao.

Several map insets also focus on important Japanese conquests during the Russo-Japanese War (Feb 8, 1904 - Sep 5, 1905) including the two-week long Battle of Mukden (Feb 20, 1905 - March 10, 1905) and the Battle of Port Arthur (Feb 8 - 9, 1904), both important Japanese victories. That the compiler of this map linked the events of the Russo-Japanese War, during which Russia and Japan were at odds, with the events of World War I, when they were allies, suggest that Japan did not necessarily consider itself as part of the greater global hostilities, rather that both wars were merely tools in Japan's ascent as a world power.

World War I had been economically and financially beneficial for Japan and further boosted patriotism, especially with the capture of Qingdao. As a member of the victorious side and the clear rising power in East Asia, Japan was eager to play a role in the postwar settlement. Efforts to commemorate the war and brandish Japan's international reputation were aimed at the general population, including a grand Peace Exposition in Ueno Park in 1922.

However, Japan felt slighted at the Paris Peace Conference when Woodrow Wilson and other Western leaders refused to insert a racial equality clause into the Treaty of Versailles. Afterwards, Western powers teamed up to force Japan to return Qingdao to Chinese sovereignty and limit its naval capacity at the Washington Naval Conference in 1922. In Japan, it seemed clear that Western powers were determined to keep Japan as a junior partner, at best, rather than a true equal among world powers. Relations worsened significantly with Japan's invasion of Manchuria in 1931 and withdrawal from the League of Nations.

This map is quite rare, but we are aware of at least one other example, housed in the Nanjing Massacre Memorial Hall, in Nanjing, China. No further institutional examples are known, and it is scarce to the market. It is undated, but from context is likely from 1919 or soon afterwards (the Ottoman and Austro-Hungarian Empire are shown partitioned into their successor states and an independent Poland is present). The publisher of the map is unclear, but it may have been issued by the educational and propaganda branch of the Japanese military.

Very good. Mounted on original scroll (77' H x 34' W).
Looking for a high-resolution scan of this?