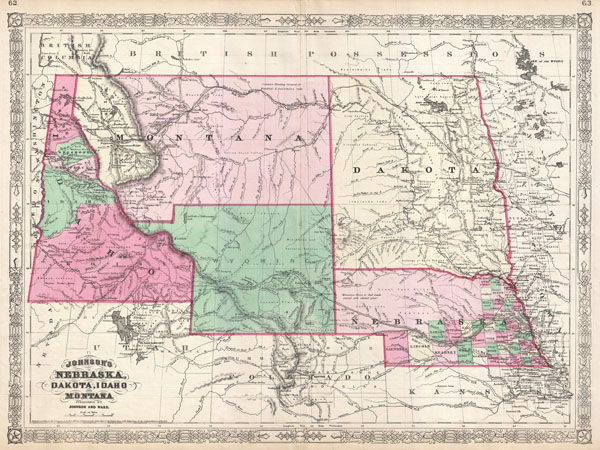 One of the first maps to include the provisional territory of Wyoming.

This is Johnson and Ward's significant 1866 map of the Idaho, Montana, Wyoming, Dakota and Nebraska. Johnson first introduced this map in 1865 to accommodate a renewed interested in this region following the close of the American Civil War. During the Civil War period the vast Washington and Nebraska territories had been divided up into smaller territories including Idaho (1863), Montana (1864) and Dakota (1861). Though largely controlled by various American Indian nations, this region was becoming increasingly attractive for settlement and development. The proposed Governor Stevens route for the Northern Pacific Railroad passed through this region, as this region as did the more favorable Central Pacific Railroad route and, to a lesser extent, the proposed Union Pacific Railroad route.

Though copyrighted to 1865, this map was updated by Johnson for publication as plate nos. 62-63 in the 1866 edition of his New Illustrated Atlas… This is the last edition of the Johnson's Atlas to bear the Johnson and Ward imprint and the first to include Wyoming.