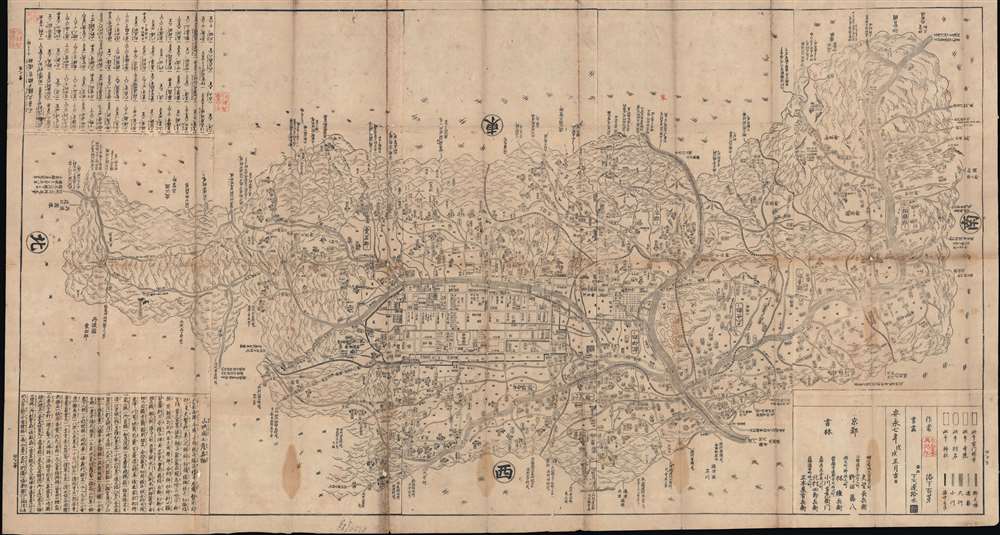 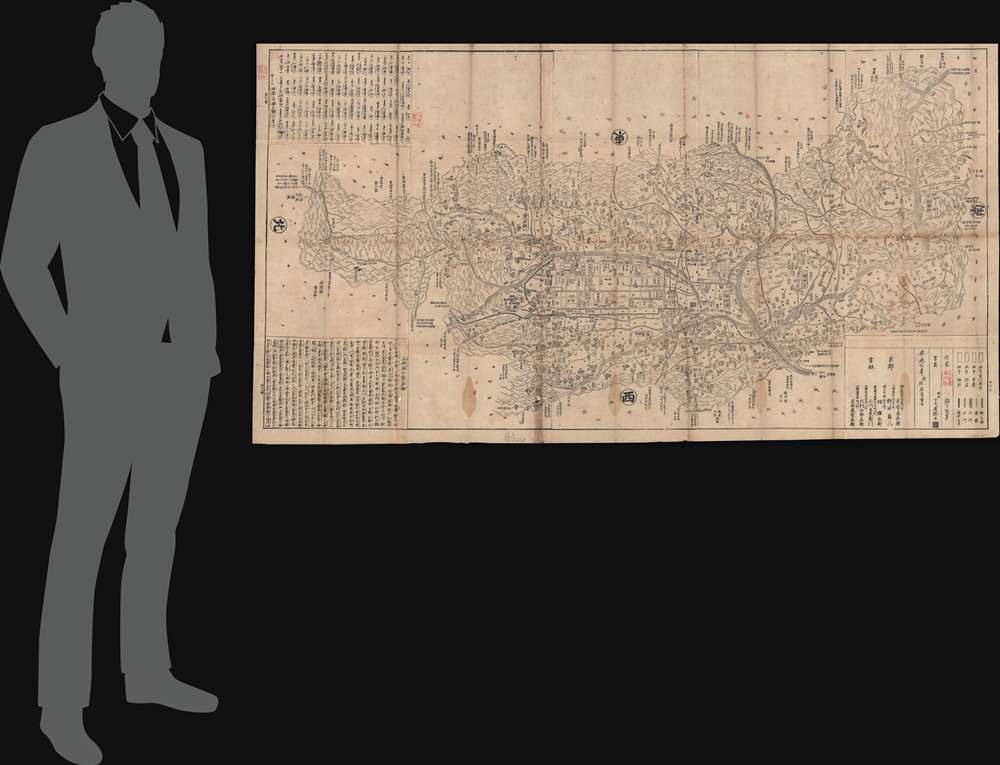 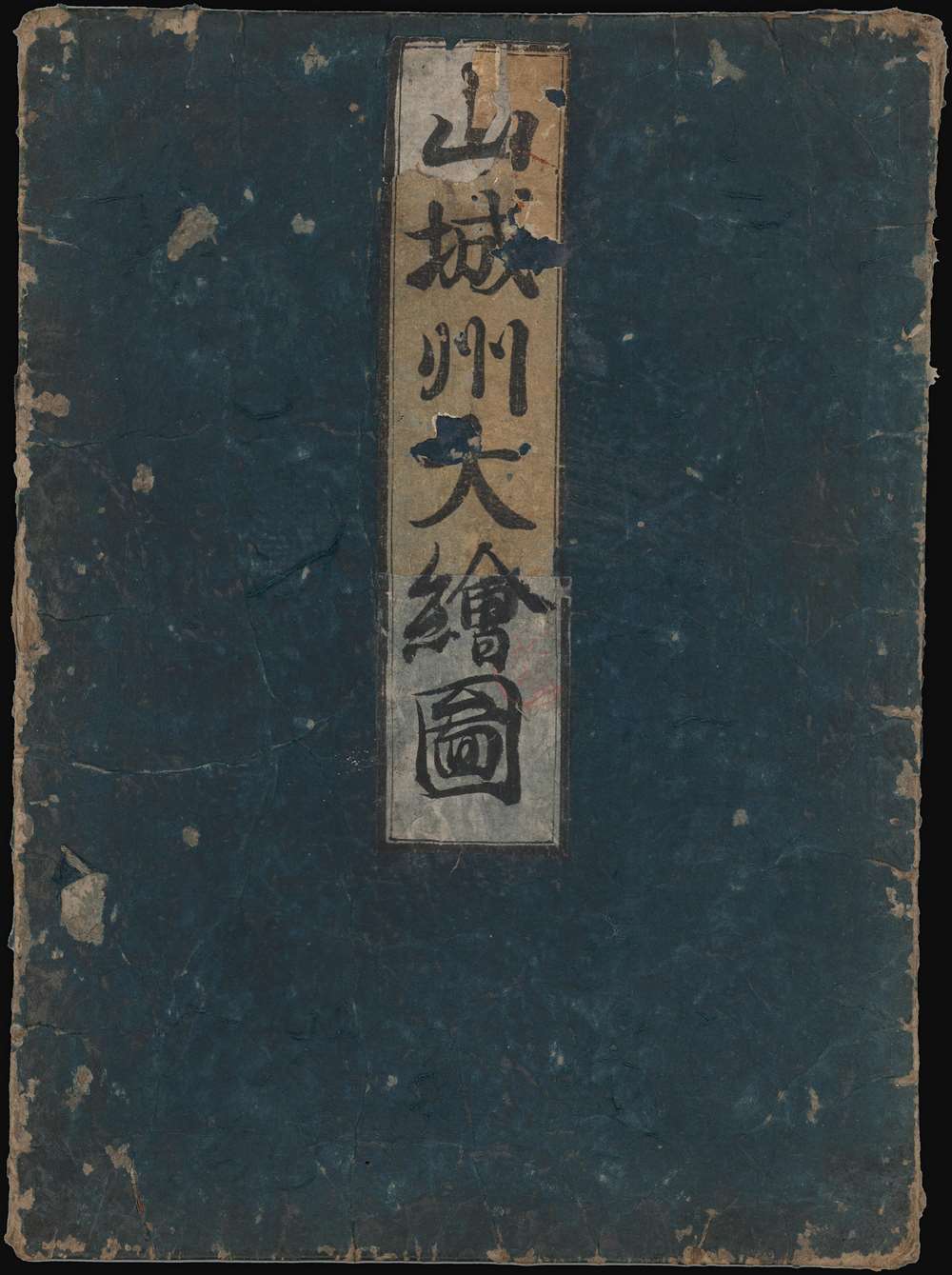 This is a rare and spectacularly detailed 1778 Hyakuga folding map of Kyoto, Japan, and its surrounding countryside, issued just 10 years before the Great Fire of 1788. The map includes a wealth of information on the temples and geography of Yamashiro as well as a number of hand-drawn annotations.

This map is oriented towards the east, with north at left and south at right, but the text is written so that the map can be rotated in any direction depending on what part of Kyoto and Yamashiro the user is looking at. It includes a legend at bottom-right as well as two insets: one an explanation of the special products and goods (名物) for which Yamashiro is known and the other listing the distances between various famous sites. Unlike other maps of Kyoto meant for travelers, this map includes more of the surrounding countryside, with the counties (郡) and villages (村) adjacent to the city noted and extensive descriptions of rivers, mountains, roads, and other features. Handwriting has been scrawled into the margin, hardly legible now, seemingly directional notes left by a previous owner. A red character for East (東) has also been written in red brush at top and a red printer's seal has been stamped at several points.

Kyoto was the home of Japan's emperors since 794 CE and as a result retained a certain splendor in later centuries, even as the political power and wealth of the imperial family were overshadowed by military figures (daimyo and shogun). Kyoto was largely destroyed during Japan's Sengoku 'warring states' period in the 15th century, but, like much of the country, rebounded with the political stability provided by national unification. Although the shoguns in Edo held real power, the emperors in Kyoto made efforts to claim a degree of authority, usually with limited success.

Nevertheless, Kyoto's economy thrived under the Edo and it developed a bustling service economy catering to travelers and pilgrims. Being the western terminus of the Tokaido Road also aided in the development of the commercial economy. But this period did see its share of troubles, most notably in 1788, when a massive fire caused extensive damage to the city, burning down the Imperial Palace (cluster of buildings just south/right of the Shōkoku-ji 相國寺) and the Nijō Castle (二条御城, featured prominently at center, towards bottom).

The Many Temples and Shrines of Kyoto and Yamashiro

Kyoto and the surrounding counties are home to some 2,000 shrines and temples, as well as palaces, gardens, forests, and other culturally significant sites. Even restaurants were well-established by 1812, some dating back to the 15th century. The map meticulously notes these sites, including the Yasaka Shrine (here called Gion Shrine 祇園, towards top-center), Hōnen-in Temple (法然寺, top-center towards top-left), and the Kiyomizu-dera (清水寺, top-center).

Hyakuga (百芽; fl. c. 1777 – 1779) was a cartographer based in Kyoto during the Edo period. This unusual name is likely a pen name instead of a given name, a florid appellation akin to 'one hundred budding sprouts.' Learn More...


Shimokōbe Shūsui (下河邊拾水; fl. c. 1766 – 1865) was a Kyoto-based author and publisher during the late Tokugawa or Edo period in Japanese history. It is likely that this was the founder's name and that the shop continued to use his name after his death. Learn More...


Ogawa Tazaemon (小川多左衛門; fl. c. 1670 - 1900) was an active publisher of books and maps based in Kyoto from the mid-Edo period to the late Meiji period. The publishing house was likely named after its founder and carried on the name after his death. Learn More...


Kitamura Shirobē (北村四郎兵衛; fl. c. 1687 - 1892) was a publishing house based in Kyoto from the mid-Edo period through the mid-Meiji period. The publishing house is likely named after the founder and carried on his name after his death. Learn More...

Good. Minor wear and dampstaining on the fold lines. Some wormholing evident.