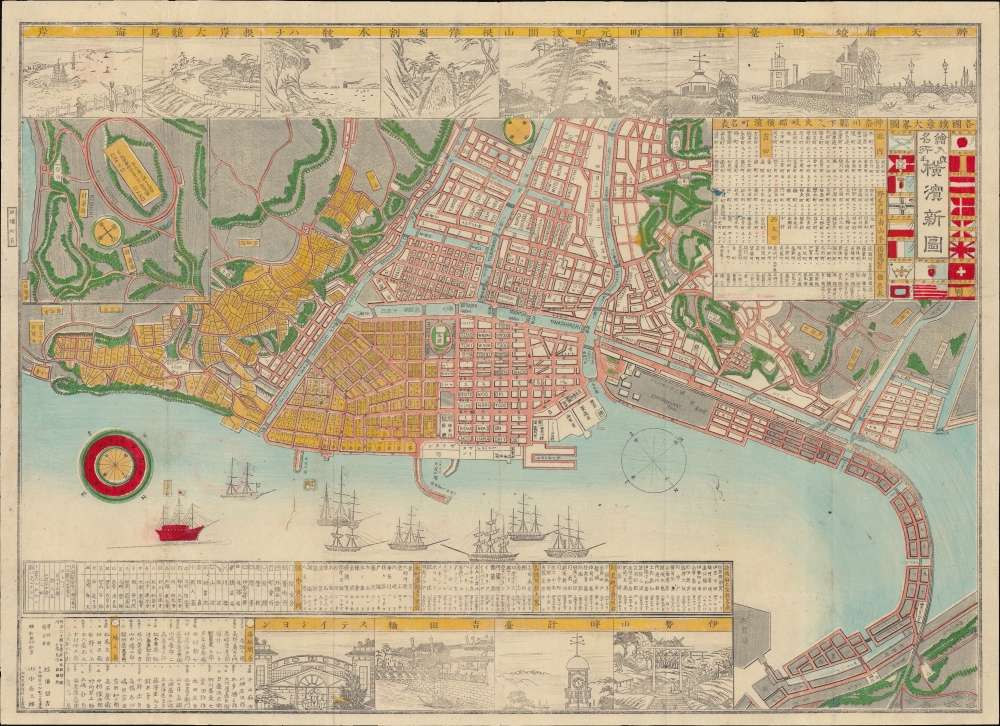 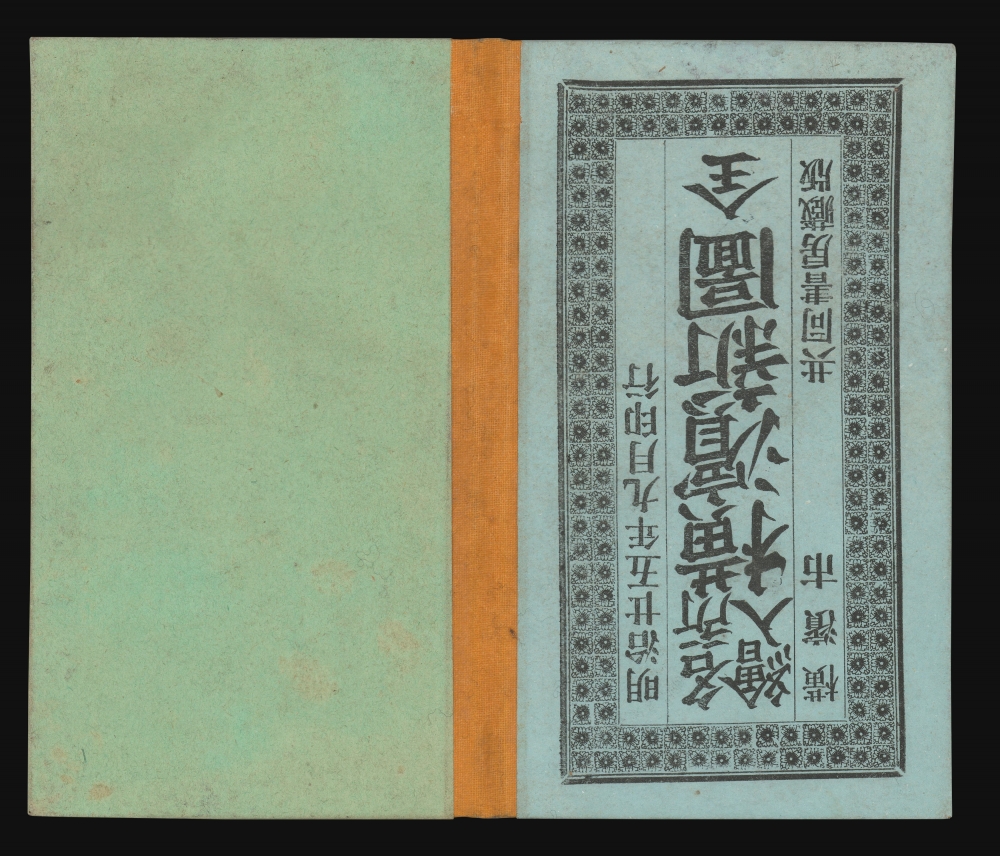 A rare and colorful 1892 (Meiji 25) Sugiura Tomekichi map of Yokohama with vignette illustrations. It depicts the city at the height of its boom years, when Yokohama served as Japan's primary point of economic and cultural exchange with the outside world.

This map is oriented towards the southwest and includes multiple compasses, some with the traditional twelve earthly branches (derived from the luopan 罗盘 or 'feng shui compass'). At left is an inset map of Negishi (here as Negushi), a suburban area beyond the scope of the map notable for containing a Western-style racetrack. The map is interspersed with some Romanized Japanese placenames and English words ('Grand stand,' 'Station railway train'). The foreign words, likely copied from a Western map of the city, were transposed rather imperfectly ('Race gourse,' 'Pobuc Garoen'); some are so garbled they appear as gibberish.

Surrounding the title cartouche are flags of the foreign nations who operated trading posts at Yokohama, including the U.S.A. (whose flag is backwards) at bottom-center. Next to the title cartouche is a list of districts and neighborhoods of Yokohama and their size, measured in cho (丁), each roughly 109 meters.

At bottom-left are tables of nautical distance between Yokohama and other Japanese ports, overland distances to other Japanese cities, and distances to foreign ports and countries, all measured in ri (里), each equaling a little under four kilometers. Boxes also include a key defining the range of symbols used in the map (areas shaded yellow at left constitute the foreign district), the number of foreign businesses in the city, the names and location of steamship operators, and information on lodgings.

Common for Japanese-produced city plans of the era, the map is surrounded by vignette illustrations, appearing here at the top and bottom border. These images highlight natural scenery (hills and mountains), recreation (the racecourse and seashore), and modern architecture, including the train station (Sakuragichō Station), a clock tower, and bridges. Similar to Tokyo, the Yokohama seen here was levelled by the Great Kantō Earthquake in 1923 and again by American bombs in the Second World War. The oldest part of the city retains the layout seen here and several historic structures (such as the Yokohama Red Brick Warehouse and the city's Chinatown) were restored or reconstructed, serving now as attractions for tourists.

Yokohama – Japan's Gateway to the Outside World

Although Japan had reluctantly signed a 'Treaty of Peace and Amity' with the United States in 1854, allowing for greater foreign presence and influence in Japan, the terms were quite vague until a subsequent treaty, the Treaty of Amity and Commerce (also known as the Harris Treaty), was signed in 1858, opening Japanese ports to foreign trade. Other foreign powers piled into Japan to sign similar treaties stipulating rights for their nationals to trade and reside in certain Japanese ports. The most important of these 'treaty ports' were Nagasaki and Yokohama, the former having been a major port for centuries, the latter much less so.

The foreign powers demanded a port near Tokyo, understanding that the capital itself was not an option. Yokohama was primarily chosen because the most obvious choice, Kanagawa-juku, a nearby coastal station on the Tōkaidō, was opposed by the Shogun. Much like Shanghai in China, Yokohama grew rapidly and became the main conduit for the exchange of people, goods, and ideas between Japan and the outside world. Aside from Western traders, Chinese merchants and workers also resided in Yokohama in large numbers, establishing an important Chinese community there, still the largest Chinatown in Japan.

Woodblock artists rushed to depict the new visitors, who were regarded with both curiosity and revulsion, but in either case were an object of keen interest throughout Japan. These prints were so popular that they spawned an entire genre, known as Yokohama-e (橫濱繪).

As the city itself was a product of the treaty port system, Yokohama was quick to embrace foreign technology, and Japan's first major rail line was opened from Yokohama to Edo (by then renamed Tokyo) in 1872. Eventually, Yokohama would grow to swallow up Kanagawa-juku and other nearby towns, becoming the capital of Kanagawa Prefecture and the second largest city in Japan.

The Western (and particularly British) influence can be seen here in the city's architecture and urban planning. This map is significant because it was produced soon after a change in regulations in 1889 that allowed foreigners to more freely travel and reside outside of designated areas. 1889 was also the year that Yokohama was officially incorporated as a city, likely the reason for the phrase 'revised' (改正) in the map's title.