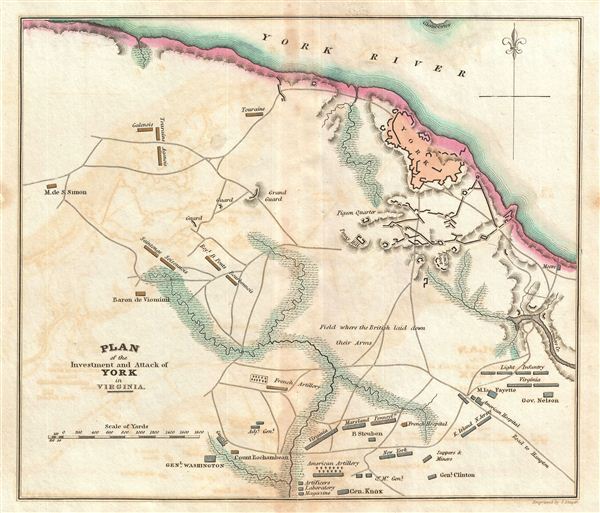 The Siege of Yorktown - the decisive battle of the American Revolutionary War.

This is a rare plan or map of Yorktown, Virginia, during the American Revolutionary War issued for John Marshall's 1832 edition of the Life of Washington. The map covers the city of Yorktown (York) and the surrounding countryside. Various rivers, roads, and topographical elements are noted. Color coding indicates the positions of the British (Red) and Continental (Blue) forces as each attempted to maintain control of the region. General Cornwallis had taken control of the British forces with the intention of establishing a deep water port on the Chesapeake Bay from which the British could stage additional trips and supplies. Cornwallis was defeated in the fields outside of Yorktown by a coalition of Continental and French forces under George Washington and the Comte de Rochambeau, respectively. The surrender of Cornwallis and the British army at Yorktown proved to be the last major confrontation of the Revolutionary War and convinced the British Crown to sue for peace.

Marshall prepared this map to illustrate the Siege of Yorktown, the decisive battle leading to Continental victory in the American Revolutionary War.