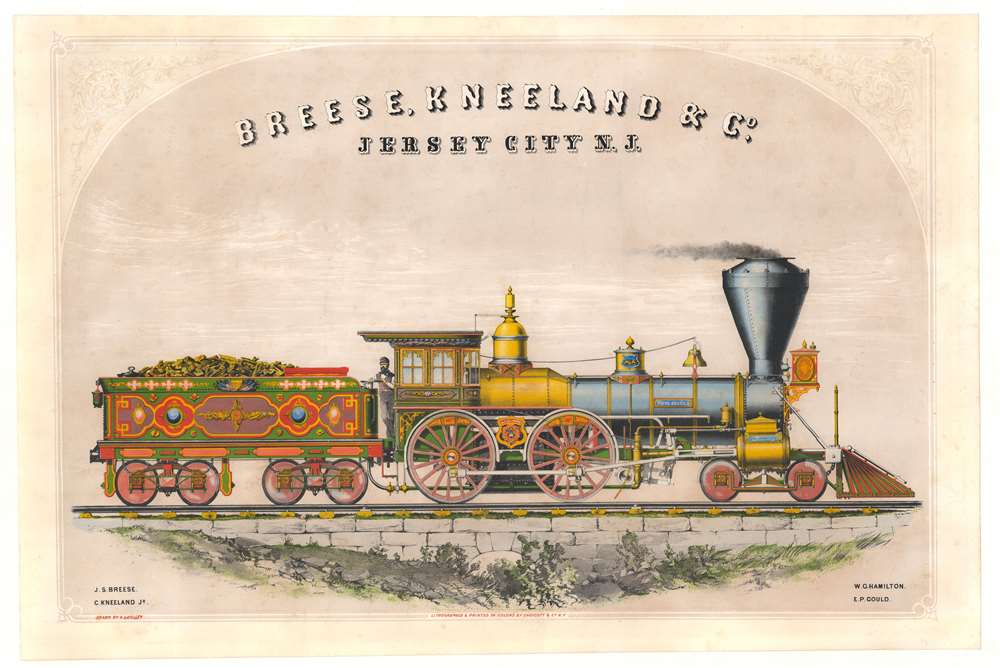 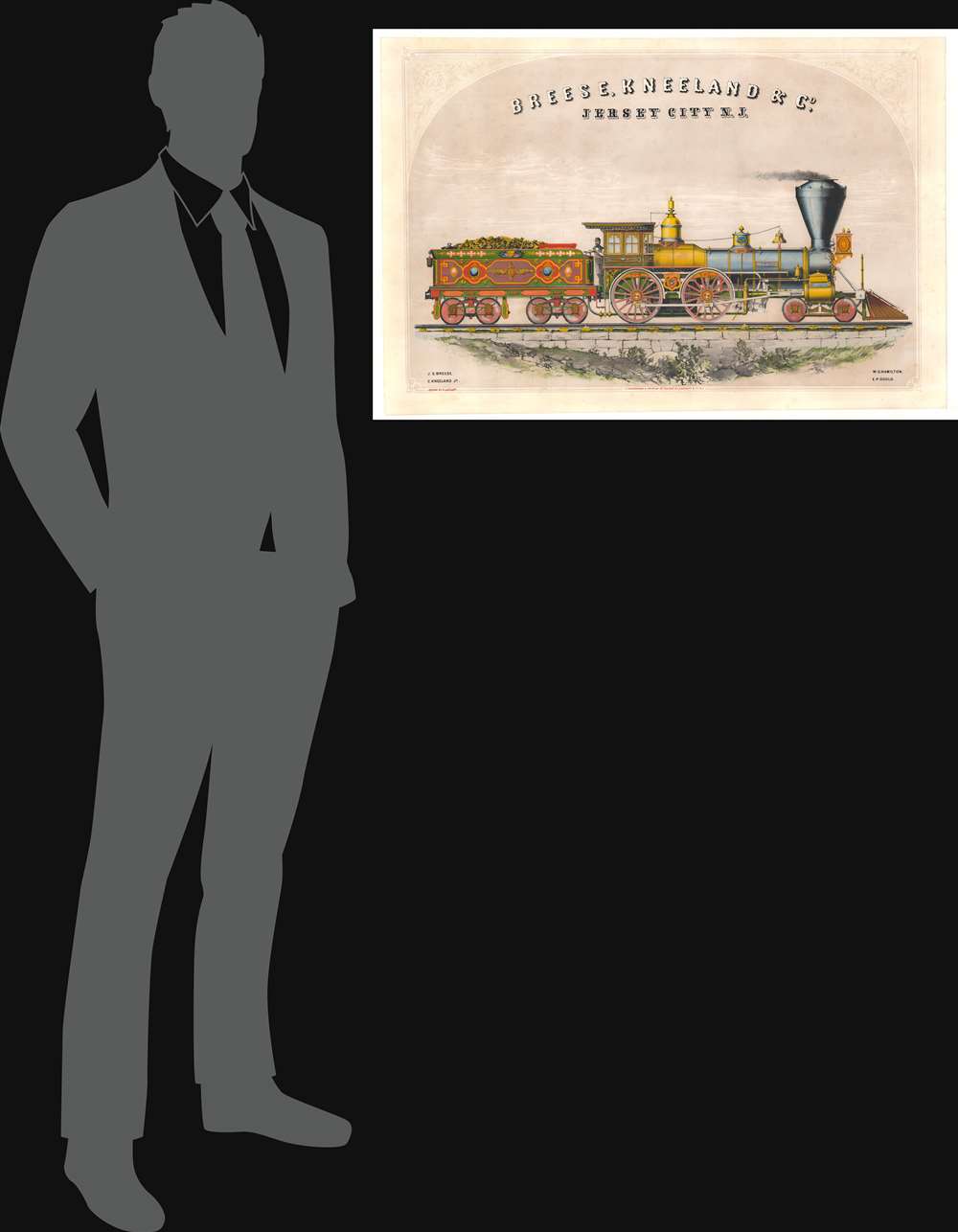 This is a c. 1858 Alexander Lyman Holley chromolithograph of a steam locomotive named 'Young America'. This is something of a holy grail for railroad collectors due to its fine coloration, impressive design, and overall rarity. The broadside was issued as a promotional piece for Breese, Kneeland, and Company, locomotive manufacturers in Jersey City, New Jersey.

The locomotive appears in bright yellow, red, and green. A plaque on the boiler declares the locomotive's name, while a brightly colored headlamp and cattle catcher adorn the front. A second plaque above the first set of wheels bears the Breese, Kneeland and Company name, while a shield between the drive wheels reads 'New York Locomotive Works'. Per an obituary in the February 18, 1882, edition of American Machinist

While employed at Jersey City, [Holly] made the first colored and shaded drawing ever made in those works. It was of the locomotive 'America' and was noticeably finer than the lithographs subsequently made from it, eliciting the warm admiration of every mechanic who saw it.

Active between 1853 and 1873, Breese, Kneeland, and Company was first known as the New York Locomotive Works, but operated under several names during its twenty years. First owned by Charles Kneeland, William Hamilton, and S. Breese, the firm built steam locomotives. Encrease Personette Gould (1822 - 1876) served as the firm's first shop foreman and designer. The firm built around 300 locomotives, of which only one survives. The El Paso and Southwestern Railroad No. 1 is part of the collection at the Centennial Museum at the University of Texas, El Paso.

Chromolithography, sometimes called oleography, is a color lithographic technique developed in the mid-19th century. The process involved using multiple lithographic stones, one for each color, to yield a rich composite effect. Oftentimes, the process would start with a black basecoat upon which subsequent colors were layered. Some chromolithographs used 30 or more separate lithographic stones to achieve the desired product. Chromolithograph color could also be effectively blended for even more dramatic results. The process became popular in the late 19th and early 20th centuries, when it emerged as the dominant method of color printing. The vivid color chromolithography produced made it exceptionally effective for advertising and propaganda imagery.

This lithograph was drawn by Alexander Lyman Holley and published c. 1858 by Endicott and Company. Likely, this piece was used to promote Breese, Kneeland, and Company to prospective clients. We note only one cataloged example, at the Monmouth County Historical Association.

Alexander Lyman Holley (July 30, 1832 - January 29, 1882) was an American mechanical engineer. Born in Lakeville, Connecticut, Holley entered Williams Academy in Stockbridge, Massachusetts, in 1848, and then attended Brown University, from which he graduated in 1853 where 'he took the regular degree of the scientific course'. Per the New York City Parks Department biography (a memorial to Holley stands in Washington Square Park) Holley was the first person to graduate from Brown in engineering, receiving a bachelor of philosophy. Holley went to work in the locomotive department of the works of G.H. Corliss and Nightingale (later the Corliss Steam Engine Works) as a workman and a student. He spent three years in Providence and took full advantage of his time there, learning everything his position offered to teach him. He left Corliss in 1857 to become a locomotive engineer on the Stonington and Providence Railroad, a job he held for a year. The following year (1858), Holley met Zerah Colburn, the founder of Railway Advocate and London Engineering, and Holley began writing professionally, alongside his work as a mechanic and draughtsman. Also in 1858, Holley joined the 'New York Locomotive Works' of Breese, Kneeland and Company in Jersey City, New Jersey. Per an obituary in the February 18, 1882, edition of American Machinist

While employed at Jersey City, he made the first colored and shaded drawing ever made in those works. It was of the locomotive 'America' and was noticeably finer than the lithographs subsequently made from it, eliciting the war admiration of every mechanic who saw it.

Holley and Colburn went to Europe in 1859 (it is unclear if Holley had left the employ of the new York Locomotive Works at this point in time) as commissioners sent by the presidents of the leading American railroads to study the technical conditions of European railroads which produced 'The Permanent Way, and Coal-burning Locomotive Boilers of European Railways'. Holley also wrote for the New York Times in 1858 and 1859 and became a special correspondent for the Times in London in 1859. He returned to London once again in 1860 to cover the final construction phases and the maiden voyage of the Great Eastern (a huge side-wheel steamship). During the Atlantic crossing, Holley penned a letter to the times in which he predicted that screw propellers were soon supersede sidewheels. Holley was sent to Europe again in 1862, this time to study European ordnance and armor for Edwin A. Stevens, and subsequently published a book on the subject called 'Treatise on Ordnance and Armor'. During this trip to England Holley met Henry Bessemer (later Sir Henry Bessemer) who developed the Bessemer steel process. Holley learned the processed and upon returning to the United States obtained control of Bessemer's American patents. With this victory, secured in 1864, Holley became forever linked with Bessemer steel. This link pushed him to be involved in the establishment in one way or another of a series of steel works across the eastern United States. Holley also made improvements to the Bessemer process, including the resulting Holley vessel bottom, a modification that was used in all American works. He lectured at the Columbia College School of Mines and was a professor at Stevens College of Technology beginning in 1872. Holley was active in many professional engineering organizations and was President of the American Institute of Mining Engineers in 1875. He was in London with his family in the summer of 1881 when he became seriously ill for 'about ten weeks' and was finally ordered by his doctors to return to the United States. Unfortunately, he had to return without his wife and two adult daughters because one of his daughters was sick with typhoid fever. Upon reaching New York, his health did not improve, and he died 'only ten minutes before the arrival of his wife and children'. Learn More...

Endicott and Company (fl. c. 1828 - 1891) was a New York based family run lithography firm that flourished throughout the 19th century. The firm was founded by George and William Endicott, brothers who were born in Canton, Massachusetts. George Endicott (June 14, 1802 - 1848) trained as a lithographer under Pendleton Lithography from January of 1826. He later worked as superintendent of Senefelder Company until the summer of 1828. Afterwards, in 1830, he relocated to Baltimore and partnered with Moses Swett. Endicott and Swett relocated to New York City in December of 1831. They remained partners until July of 1834 when the relationship dissolved. George set up shop on his own account at 359 Broadway. William Endicott (1815 - 1851), George's younger brother of 14 years, joined the firm in 1840 and was made a partner in 1845, after which the name of the firm was changed to G. and W. Endicott. George Endicott died shortly afterward, in 1848, but William continued operating the firm as William Endicott and Co. until his own 1851 death at just 35 years. The firm was carried on by his widow Sara Munroe Endicott until it was taken over by her son, Francis Endicott, who ran the firm from 1852 to 1886. George Endicott, Jr. subsequently ran the firm from 1887 to 1891. Peters, in his important work on American lithography America on Stone writes "it is hard to summarize the Endicotts. They did everything and did it well . . . [they] worked with and for Currier and Ives, yet in spite of all that much of their work lacks real individuality." The Endicott firm was responsible for many 19th century views and plans of New York City and state as well as plans of Sacramento, California, and the Midwest. Learn More...

Monmouth County Historical Association 1984.520.
Looking for a high-resolution scan of this?