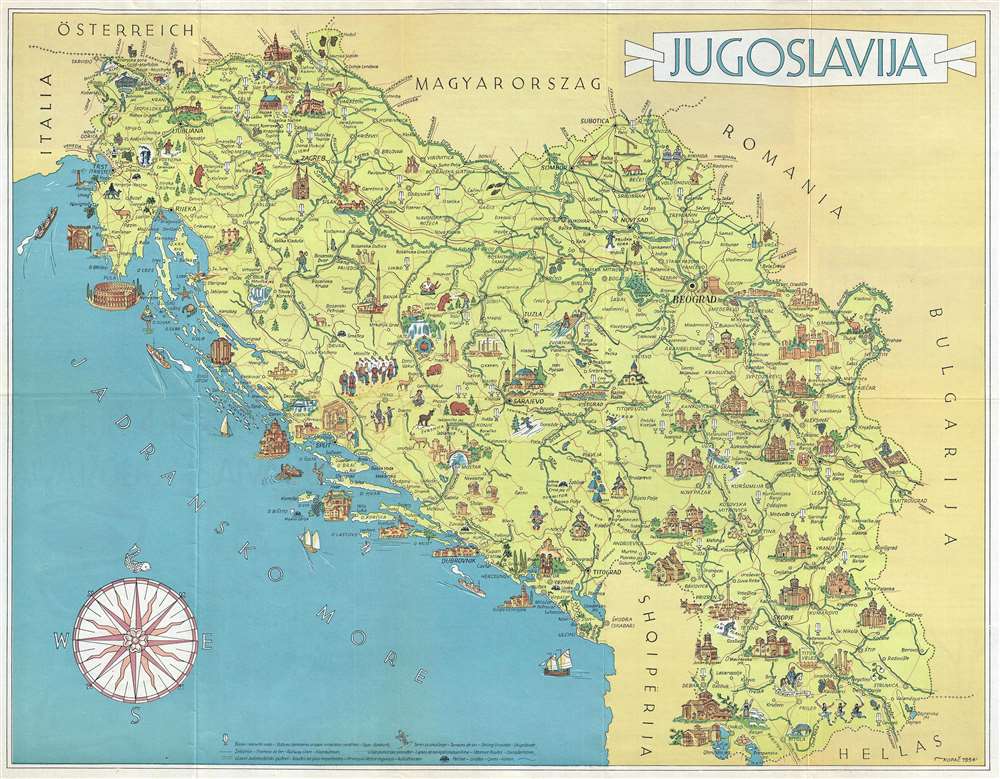 A pictorial tourist map of Yugoslavia made by a Partisan!
$150.00

This is a 1954 Vlasto Kopac pictorial map of Yugoslavia. The map depicts the region from Italy to Bulgaria and from Austria and Hungary to Albania and Greece. Published as part of a tourist brochure, myriad cities, towns, and villages are labeled, including Ljubljana, Zagreb, Belgrade (Beograd), Podgorica (Titograd), Dubrovnik, Skopje, Trieste, and Sarajevo. Several buildings are illustrated in profile, including the Emperor's Mosque in Sarajevo, Ljubljana Castle in Ljubljana, and the Muralles de Dubrovnik. Numerous islands along the Dalmatian Coast are also illustrated. Roads and rivers snake their way throughout, and vignettes of local people and wildlife lend the map an undeniable charm.

This map was created by Vlasto Kopac and was published by the Yugoslav Tourist Bureau in Ljubljana in 1954. Uncommon on the market with 2 holdings cited by the OCLC.

Vlasto Kopač (June 3, 1913 - April 27, 2006) was a Slovenian graphic designer, illustrator, architect, and mountaineer. The son of a Slovenian academic painter, Kopač inherited his father's talents and enrolled as an architecture student at the University of Ljubljiana in 1934. He studied under the renowned Slovenian architect Jože Plečnik, with whom he worked until World War II, which interrupted his studies, with the exception of a stretch in 1936 when he served four months in prison for carving a communist hammer and sickle into a bunkhouse at a mountain lodge. During the Italian occupation, Kopač was a member of the resistance and served as a forger. He mad IDs, partisan badges and banners, and even created an elaborate system for counterfeiting watermarked documents. Since Kopač was also a talented artist, he also designed leaflets, covers for underground publications, and logos. He was arrested in the fall of 1943 and was sent to Dachau concentration camp in 1944. Even in Dachau he didn't stop drawing, and the Museum of Modern History in Ljubljana possesses 65 of about 80 drawing Kopač completed during his time in Dachau. After his release from Dachau following the end of the war, Kopač attempted to return to a normal life, and was even made president of the Slovenian Mountain Organization, a position he held from 1946 until 1948. That year, he was arrested again, this time by the Communist authorities in Slovenia, and put on trial as one of the defendants in the Stalinist show trials that have become known as the Dachau Trials. In these trials, defendants were forced to confess to being Nazi spies while they were imprisoned at Dachau, to collaborating with the Gestapo, and to working with the Western powers after the end of the war in an effort to undermine international socialism. Kopač was sentenced to death in the Sixth Dachau Trial, but his sentence was later communted to twenty years hard labor. He was released for reasons that remain unclear, in 1954. After his release, it took him years to find gainful employment and was not officially 'rehabilitated' until 1971. It was not until 1956 that he found a job as a contract architect in the Department for Memorial Protection fo the District People's Committee of Ljubljana, and in 1963 he became the director of the Medobčin Institute for Monument Protection Ljubljana. In 1989 he was named the Honorary President of the Mountaineering Association of Slovenia. In 1995, Kopač finally graduated from the Faculty of Architecture in Ljubljana, nearly sixty years after he initially enrolled. Learn More...