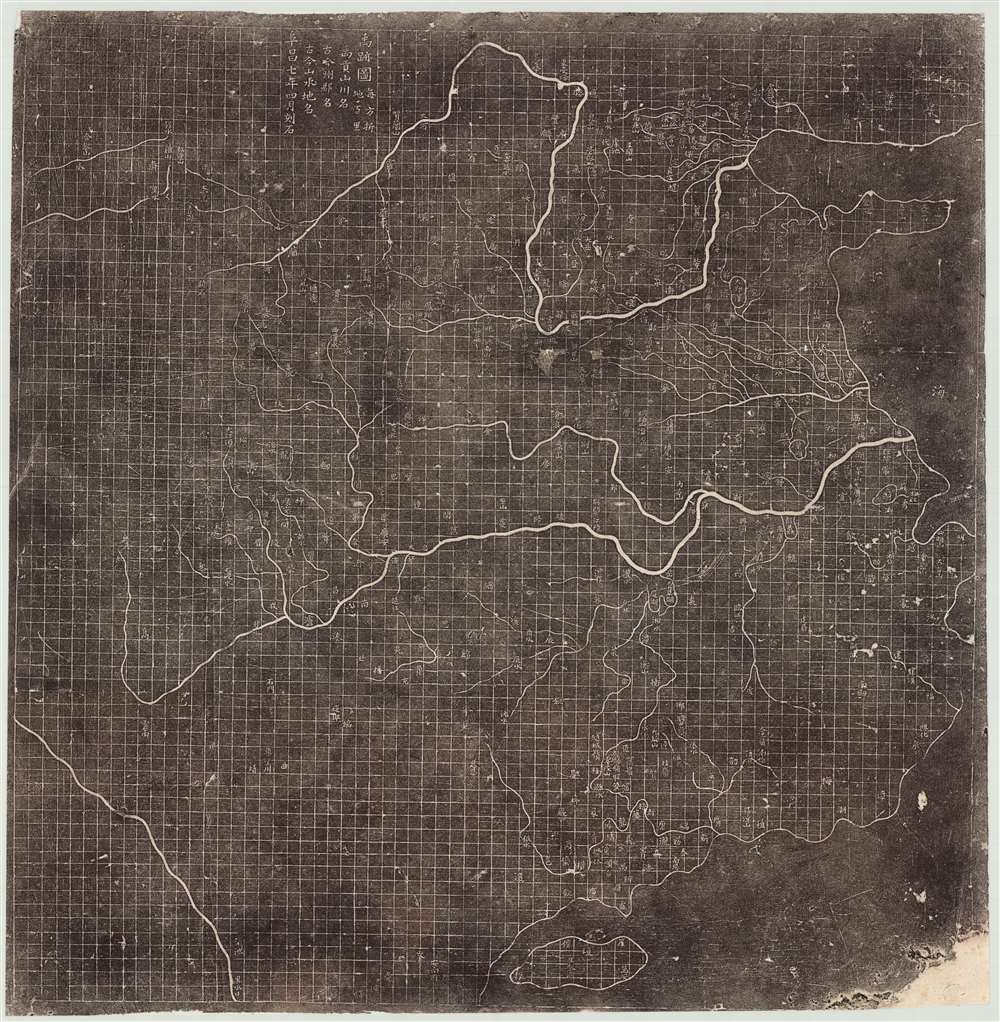 …the most outstanding map in the world at that time, and one of the greatest achievements of the Song Dynasty cartographers. - Joseph Needham

A 19th century Chinese rubbing of the Southern Song Dynasty 1137 AD Yu Ji Tu 禹跡圖, or Map of the Tracks of Yu Gong. The Yu Ji Tu is one of the earliest and most important Chinese maps ever produced. Issued at a time when European cartographers were producing only vague unscientific T-O style religious map, this Chinese map exhibits a cartographic accuracy and meticulousness comparable to 20th century mapmaking. This is the earliest map to employ a 'Ji Li Hua Fang' rectilinear grid system. The Yu Ji Tu stands out for its precise illustration of China's coasts and complex inland river system, highlighting the Yellow and Yangtze Rivers with their many tributaries. The significance of this map cannot be understated, prompting the British historian Joseph Needham to describe it as,

…the most outstanding map in the world at that time, and one of the greatest achievements of the Song Dynasty cartographers.

Although the stele dates to 1137, the contents of the map suggest earlier cartography dating to 1080 -1093. Coverage of the map extends from the Bohai See and the Shandong Peninsula to Hainan and from, roughly, Sichuan, to the South China Sea. The precise grid, for which the map is most famous, breaks China into squares of 100 Li (roughly 31 miles). The coastline, the Yellow River, the Yangtze River and its tributaries, Taihu Lake, Dongting Lake and Poyang Lake are highlighted. This map identifies roughly 380 administrative districts, nearly 80 rivers, 70 mountains, and 5 lakes.

This map is constructed according to an ancient cartographic model known as 'Ji Li Hua Fang' (吉利华芳) laid down by Péi Xiù (裴秀, 224 - 271) of Western Jin Dynasty (266–316). The model, which translates roughly as the 'Six Principles of Cartography' is the most scientific of the three styles of early Chinese maps - the other two being either more visual and derived from landscape painting tradition or based upon western-style mathematical projection systems. Péi Xiù probably based the grid-idea on the even earlier work of Zhāng Héng (張衡, 78 - 139 CE), a polymath inventor and statesman of the Eastern Han (25 - 220). The present map is the earliest surviving work in the 'Ji Li Hua Fang' style.

Tracks of the Emperor Yu and the Song

The title of the map refers the legendary first emperor of China Da Yu 大禹 (Great Yu). The reign of Yu is recorded in the Yu Gong (禹贡) or Tribute of Yu, a chapter if the Book of Xia (夏書/夏书) section of the Shu-King, Book of Documents, (书经) one of the Confucian Five Classics of ancient Chinese literature. The Book describes Yu's survey of the 9 traditional provinces of China - hence the 'Footsteps' or 'Traces of Yu.'

At the time of the Yu Ji Tu's creation, China was divided between the Southern Song Dynasty, and the Manchurian Jurchen Jin, who controlled the territory north of the Yellow River. Through their maps, cartographers called for a reunification of China according the classic boundaries established by Yu. The title specifically references the writings in the 4th century BCE Spring and Autumn period commentator Zuo Qiuming (左丘明, 556 - 451 BCE). Zuo's Zuo Zhua左传or 'Commentary of Zuo,' featured a call for unity, reminding readers to 'Recover Yu's tracks; do not let go of the things of old!'

Two known variants of this map survive, both of which are inscribed onto stone stele. The later of the two was carved in 1142 and is located in Zhenjiang. The Zhenjiang stele, and derivative rubbings, are identifiable by the articulation of waves in the surrounding oceans. The earlier more famous example, carved in 1137, of which this is a rubbing, is located The Stele Forest or Bei Lin Museum in Xi'an, China. The Bei Lin Stele is of note in that it is two sided, with one side featuring the Yu Ji Tu and a second side illustrating another important early map, the Hua Yi Tu 華夷圖.

Rubbings from both stele have been made for hundreds of years, but few survive. We have identified rubbings of the Yu Ji Tu at the National Library in Beijing, the Bei Lin Museum in Xi'an, the Library of Congress in Washington D.C., the University of California Berkeley's East Asian Library, and Harvard University. While no other surviving rubbings are known, it is likely that several exist in other Chinese institutions. Today the Bei Lin Stele is protected under glass, a national treasure of China, but in the 19th century it was still possible to produce a rubbing. Most surviving rubbings in western collections date to around 1900, and the present example similarly dated based upon analogs in the paper, potential access to the stele, and unverifiable provenance referencing a late 19th English century trip to China.