1874 Japanese Shu Oka Map of the World on Mercator Projection 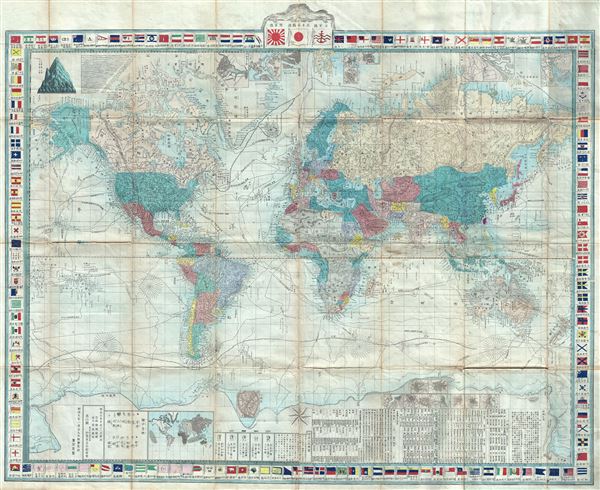 1874 Japanese Shu Oka Map of the World on Mercator Projection

Scarce Japanese world map with the flags of many nations.

An impressive 1874 (Meiji 7) map of the world by Shu Oka. This finely engraved map covers the entire world on Mercator's Projection. The amp identifies the routes of various explorers throughout with extensive annotation as well as inset city plans, historical and anthropological notes, comparative mountains and rivers charts, and ethnographic maps. The border is composed of the flags of various nations. Cartographically this is an updated and reduction of Seiyo Sato important map of 1862, which itself is derived from Dutch sources admitted to Japan via the open port of Yokohama.

Very good. Some wear on original fold lies and minor splitting in two or three places.

Univ. of California Library, Berkeley, East Asian Library, A27.
Looking for a high-resolution scan of this?