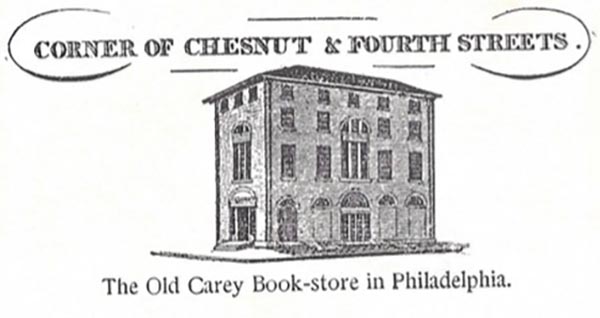 Edward L. Carey (April 7, 1805 - June 16, 1845) was an American publisher, aesthete, art lover, and the co-founder, along with Abraham Hart, of the prominent publishing firm Carey and Hart. Carey was the son of American publisher Mathew Carey and Bridget Flahaven Carey. He initially worked for his brother, Henry Charles Carey who, along with relative and partner Isaac Lea, purchased their father's publishing house in 1822, rebranding it as Carey and Lea. Eventually, Edward Carey became a junior partner in the firm, acquiring half of the shares belonging to Lea, and the imprint briefly changed to Carey, Lea, and Carey. On November 1, 1829, Edward Carey detached himself from his brother's firm and formed a partnership with Abraham Hart, an employee of Carey, Hart, and Carey. This firm, known as Carey and Hart, was successful for twenty-five years, publishing works by Henry Wadsworth Longfellow, William Cullen Bryant, and Eliza Leslie. Carey suffered from declining health during the last three years of his life. According to William Gilmore Sims, Carey died 'after suffering for some years from a tedious affliction of the spine.' Carey died on June 16, 1845 at the age of 40. Before his death, he was elected President of the Academy of Fine Arts, but declined the position due to his health.