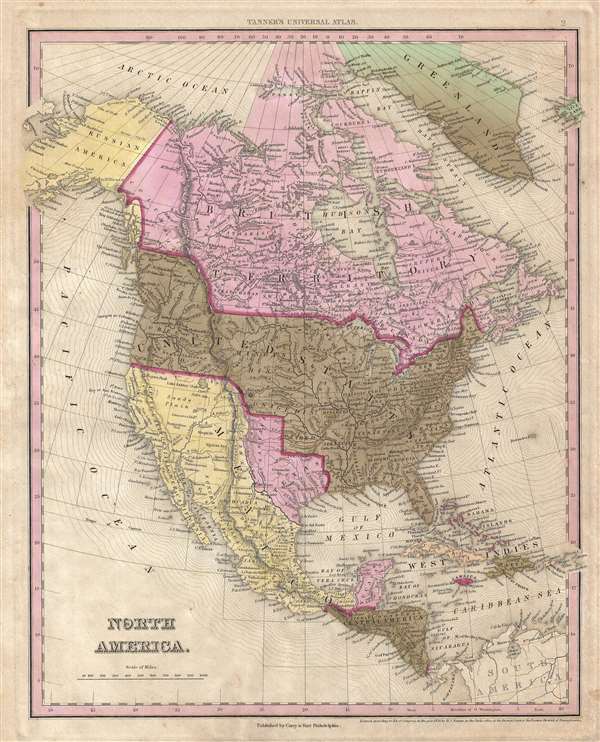 One of the first maps to show Jedediah Smith's cartography. Also illustrates the Republic of Texas!

This is Tanner's rare 1845 map of North America showing the Republic of Texas at its fullest. The map cover all of North America, from the Arctic Circle, Greenland, and Alaska, to Mexico, Central America, the Caribbean, and the West Indies Islands. It illustrates a period of shifting political alliances, territorial expansion, and increasing conflict. One year after this map was issued, the Mexican-American War (1846 – 1848) would break out, leading to one of the largest redistributions of political power in 19th century American history.

Issued at the tail end of the Republic of Texas Period (1836 – 1845) and on the cusp of Texas's annexation into the United States at the 28th State (December 29, 1845), this is one of the few maps to illustrate the full territorial claims of the Republic of Texas. These early claims extend west as far as the Rio Grand and the Rio del Norte and north along a narrow 'stovepipe' as far as modern-day Wyoming. While Texas is clearly defined here as separate from Mexico and according separate coloration similar to Canada, it is noteworthy that Tanner does not give Texas a dark red border that signifies a separate country – thus indicative of Texas's ambiguous state at the time as nominally independent but not recognized as such by most world powers.

This map is also significant for Tanner's incorporation of Jedediah Smiths cartography. Jedediah Smith (1799 - 1831) was an American born trapper, hunter, explorer, fur trader, and trail blazer active in the early part of the 19th century. Smith is an incredibly important but little-known figure who, in the years between the Lewis and Clark expedition and Fremont's explorations, explored and trail blazed much of the American West. Smith died before he could promote his cartographic advances, but his manuscript material, now lost, fell into the hands of David Burr and other cartographers, like Gallatin and Tanner, who first brought his discoveries to the general public. When discussing this map in his Mapping the Transmississippi West, Wheat writes,

>There is some question whether Tanner or Gallatin should be accorded the palm for being the first to make Jedediah Smith known to his countrymen. This Tanner map was republished at least to 1845, but since the Tanner 'Mexico' of 1834 retained the earlier forms and since no map of this type with date earlier than 1836 has been discovered, Gallatin and Tanner must both be given the prize. It is unfortunate that Warren was ignorant of this map. It was originally brought to my attention by Charles M. Camp.

The map further illustrates American claims to British Columbia, a conflict between British American and the United States over the northern limits of Oregon Territory, known known as the Oregon Boundary Dispute or, more commonly for its Pro-American slogan '54-40 or Fight!' One year after this map was issued the Oregon Question was finally resolved by the Oregon Treaty. The 1846 Oregon Treaty established the border between British North America and the United States along the 49th parallel until the Strait of Georgia, where the marine boundary curved south to exclude Vancouver Island and the Gulf Islands from the United States.

This map was issued by Carey and Hart in Philadelphia for and published as plate no. 2 in the 1845 edition of Tanner's New Universal Atlas. The plate was later revised and updated for publication in Mitchell's New Universal Atlas, and thus provided the underlying cartography for one of the longest running and most widely distributed American maps of North America to appear in the 19th century.