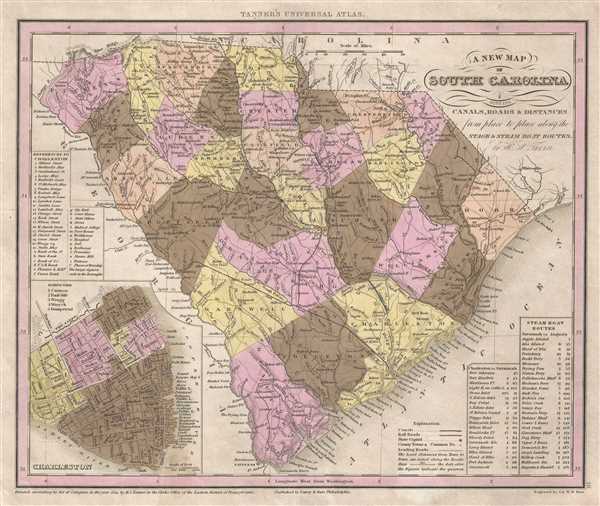 This is an 1845 Henry Schenck Tanner map of South Carolina published by Edward L. Carey and Abraham Hart. The map depicts the region from North Carolina to Georgia and from the point where North Carolina, Georgia, and South Carolina meet to the Atlantic Ocean. An incredibly up-to-date edition, this map features the route of the South Carolina Rail Road Company (which operated until 1894, when it was taken over by the Southern Railway, between Charleston, Columbia, and Savannah. As this company was founded in 1843, two years after Tanner created the original, Carey and Hart must have updated the plate after acquiring it from him.

A highly detailed work, each county is illustrated, labeled, and shaded a different color to allow for easy differentiation. Numerous cities and towns are labeled throughout, along with rivers, creeks, and swamps. An extensive road network is depicted, as well as a handful of canals. Coastal locations are also labeled, from Savannah and the Savannah River to the Shallot River in North Carolina. An inset map of Charleston is situated in the lower left corner. The city's neighborhoods (referred to here as boroughs) are labeled and shaded different colors, in the same fashion as the counties on the larger map. Streets are labeled throughout the city, although twenty-one are identified numerically and correspond with an index above the inset map. Nineteen locations within Charleston are labeled alphabetically and are identified in the same index, while 'Places of Worship' in Charleston are identified by a capital 'C'. Two tables and a legend are situated in the lower right corner. One of the tables lists the waypoints along the route from Charleston to Savannah, indicating distance between each waypoint, and the total distance covered. The second table lists the steamboat routes from Savannah to Augusta in the same manner.