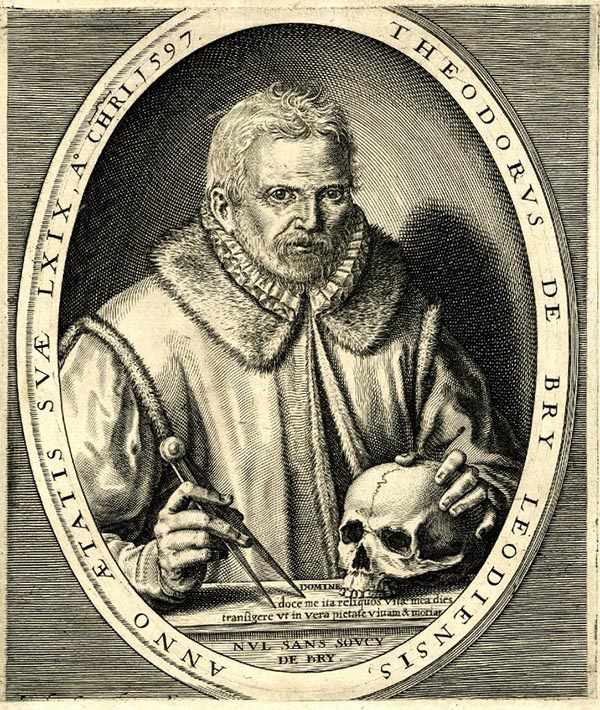 Theodore de Bry (1528 - March 27, 1598) was an important publisher active in the mid to late 16th century. De Bry was born in 1528 in Liege, then a Prince-Bishopric and thus independent of neighboring nations. The De Bry family were accomplished jewelers and copperplate engravers and, following the family tradition, Theodore apprenticed in these fields under his grandfather Thiry de Bry senior (? - 1528), and later under his father, Thiry de Bry junior (1495 - 1590). To avoid growing religious strife in the region Theodore de Bry left Liege for the more tolerant Strasburg. Shortly afterwards, in 1577, he moved again to Antwerp and, in 1580 to London, where he became well known for his engraving skills. It was either in Antwerp or in London that De Bry befriended the English publisher and editor of traveler's tales Richard Hakluyt. Inspired by Hakluyt's work, De Bry began to collect travelers' tales, particularly of voyages to New World. His most prominent acquisition was most likely the letters and papers of the French painter and mapmaker Jacques Le Moyne de Morgues discussing a disastrous attempt by French Huguenots to colonize parts of Florida. Around, 1588 De Bry moved to Frankfurt where he began his own publishing firm. Among De Bry's earliest and most prominent publications are his Grands Voyages, a multivolume compilation of travelers' tales that included the work of Le Moyne as well as some of the earliest published depictions of the North American mainland. The firm also published various other works including an important account of early English attempts to colonize Virginia with illustrations by John White. De Bry died in Frankfurt on March 27, 1598, having never left the shores of Europe, though his name was associated throughout Europe with tales of travel and adventure. Theodore de Bry was succeeded by his son John-Theodore (1560 - 1623) who continued the publishing firm until his own death in 1623.