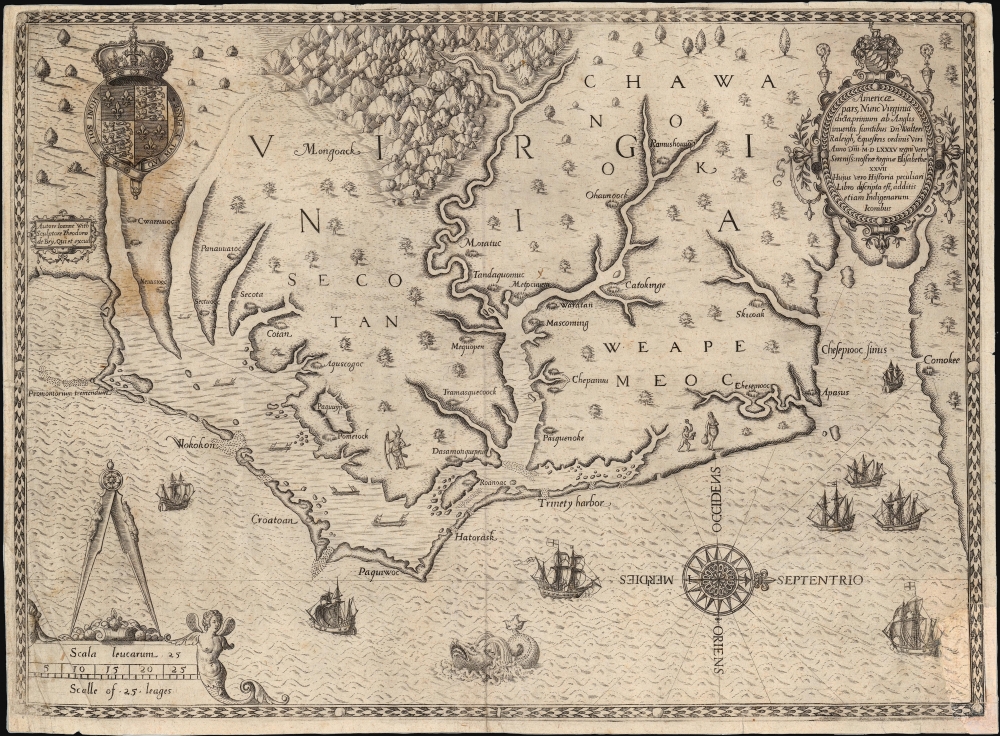 The first detailed map of any part of North America by an actual Colonist.
$16,500.00

This is John White's 1590 map of the first Virginia colony. It is one of the first maps of any region of what is now the United States, and the first map of a settled area produced by a colonist. Specifically, it is the first map to result from England's efforts to colonize North America. It is the earliest map available to the collector of Virginia and North Carolina, and it is the first map to name Chesapeake Bay. It is among the most influential early Americas maps: its traces can be seen on maps for decades to follow.

The map is based on a manuscript drawn by John White, who in addition to being the 1585 expedition's primary artist would become governor of the Roanoke colony in 1587. It was engraved by Theodore De Bry, who included the map in his 1590 editions of Thomas Harriot's report of the 1585 expedition, the colony, and the land and people surrounding it. Although his name is not applied to the map, it is most probable that Thomas Harriot - a surveyor, mathematician, astronomer, and navigator - had been instrumental in executing the surveys that informed White's manuscript. The detail and scope of the map suggests that colonist's efforts to 'discover' - i.e., to survey and record - the surroundings of the colony were more ambitious and successful than has generally been credited. Of those assigned to the colony, Harriot's expertise would have been most apt to the task. The version engraved by De Bry, moreover, is more detailed than the surviving White manuscript, which suggests that the engraver incorporated significant detail both from Harriot's Briefe and True Report and perhaps directly from the author.

Despite the original manuscript's northern orientation, the map as engraved by De Bry is oriented to the west, with north indicated by a superbly engraved compass rose. It spans from Cape Lookout to the northern shore of Chesapeake Bay, capturing the Carolina Outer Bank Islands with a high degree of accuracy. The map identifies nearly thirty Native American villages, and includes both Roanoke (Roanoac) and Croatoan, the village whose name was cut into a tree by the lost Roanoke colonists. De Bry's engraving is a beautiful and evocative work, its westward orientation allowing for a wealth of decorative flourishes, such as the English ships commanding the Outer Banks and Chesapeake Bay. Natives in canoes are shown in the vicinity of Albemarle and Pamlico sounds. The English Royal Arms and an elaborate cartouche embellish the upper left and right corners, and the map's scale in leagues is given in the lower left. De Bry's beautifully engraved mountains evoke the unknown interior of the new-found land, and the mystery of the region is emphasized by a fierce sea monster at the bottom center.

Recently, archeological digs of the Merry Hill area at western Albemarle Sound were undertaken inspired by details that came to light, heretofore obscured by a patch on the original White manuscript. (The corresponding region on the more detailed De Bry engraving is marked with two villages - inscribed Metpcuuem and Tandaquomuc respectively - that did not appear on White's original manuscript.) Current analysis of the digs, which have produced English artifacts dating back to the 16th century, suggests that this area may have been at least a temporary, peaceful refuge of the Roanoke colonists.

The identification and dating of the second and third states of this map is blurry and inconclusive. Three presumptive 'states' have been identified, the first and third of which are the most scarce. The variations are restricted to the spelling of the village name 'Chesepiooc' which, in the first state, is misspelled 'Ehesepiooc.' A second state simply superimposes a 'C' over the E; while in the third state the 'E' is imperfectly erased with the 'C' in 'Chesepiooc' re-engraved over its traces. Burden describes the first and third states of this map as 'extremely rare.' A survey of examples suggests to us that there is widespread difficulty in distinguishing second and third states, however, and we believe that many examples classified as second states may in fact have been the third, given the visible traces of the 'E' that tend to remain.

This map was engraved in 1590 by Theodore De Bry for inclusion in his four Frankfurt editions of Thomas Harriot's A briefe and true report of the new found land of Virginia. Nineteen examples of the separate map are catalogued in OCLC, the states of which are not indicated in their cataloguing.

John White (c. 1539 - 1593) was an English colonial governor, explorer, artist, and cartographer. He was among the adventurers who sailed with Sir Walter Raleigh and Sir Richard Grenville in the first attempt to colonize what would become North Carolina in 1585, settling on Roanoke island. White became Governor of the Roanoke settlement, the first attempt at a permanent English colony in the New World, in 1587. His granddaughter, Virginia Dare, was the first English child born in the Americas.
Most significant in the map collecting world, was White's service as artist and mapmaker to the expedition, producing images of the region's natives, flora and fauna. His sketches of the Algonkin peoples were the most illustrative depictions of any Native North American populace to date, and represent the sole visual record of the inhabitants of America encountered by the first English settlers. With Harriot, he produced a map of the colony's surrounds. White would make three trips in all to America; between the second and third he met the German engraver Theodore De Bry, who produced and printed the first published editions of White's paintings and map. It was on his third voyage, following the meeting with De Bry and much delayed by the threat of the Spanish Armada, that the Roanoke colony famously disappeared.
White's birthdate is uncertain, as is his training. He is thought to have accompanied Frobisher in his searches for a northwest passage: though he was not mentioned, his surviving drawings from this period were of the lands and people encountered on the voyage. Following the failure of the Roanoke Colony, White returned to England and never returned. Little is known of his life thereafter. He was known to live for a time in Plymouth and kept a house in County Cork, Ireland. Learn More...


Thomas Harriot (c. 1560 – 2 July 1621) was an English astronomer, mathematician, ethnographer and translator. He also known for his contributions in navigational techniques, having worked closely with artist and cartographer John White to create navigational charts. Despite his accomplishments he is obscure, having published only his 1588 The Briefe and True Report of the New Found Land of Virginia . This firsthand description of the first English colony in Virginia would be accompanied by the famous White/ De Bry Americae pars, Nunc Virginia, which was the first detailed map of any European colony in North America. It is very probable that Harriot's 'discovery' of the region around the colony involved his own detailed survey of it, and that the results of those surveys were recorded on White's map.

Born in 1560, Harriot graduated from St. Mary Hall in Oxford, earning a bachelor's degree and thereafter studying navigation, specifically applied to sailing open seas and the challenge of crossing the Atlantic to the New World. Thereafter he was hired by Sir Walter Raleigh to aid in the preparations for, and to accompany the 1585 voyage to colonize Virginia. Despite only attending the first of the Raleigh-funded expeditions to Virginia, he would learn the Algonquian language enough to translate it, and to question natives about life in the New World, and native impressions of Europeans and their technology. Harriot's account of the voyage - A Briefe and True Report of the New Found Land of Virginia - would be broadly influential, but it was not followed up by further publications. Harriot is sometimes credited with the introduction of the potato to the British Isles, and it is understood that Harriot was the first person to make a drawing of the Moon through a telescope, over four months before Galileo. His notes reflect early observations of Halley's Comet, and sunspots as well. He corresponded with Kepler on optics. It is likely that Harriot's obscurity can be blamed on the fall from favor of his patrons, many of whom were imprisoned or otherwise implicated in the Gunpowder Plot. Harriot died in 1621, likely of a cancer which began to trouble him in 1615 or 1616, possibly pursuant to his early adoption of the tobacco habit. Learn More...