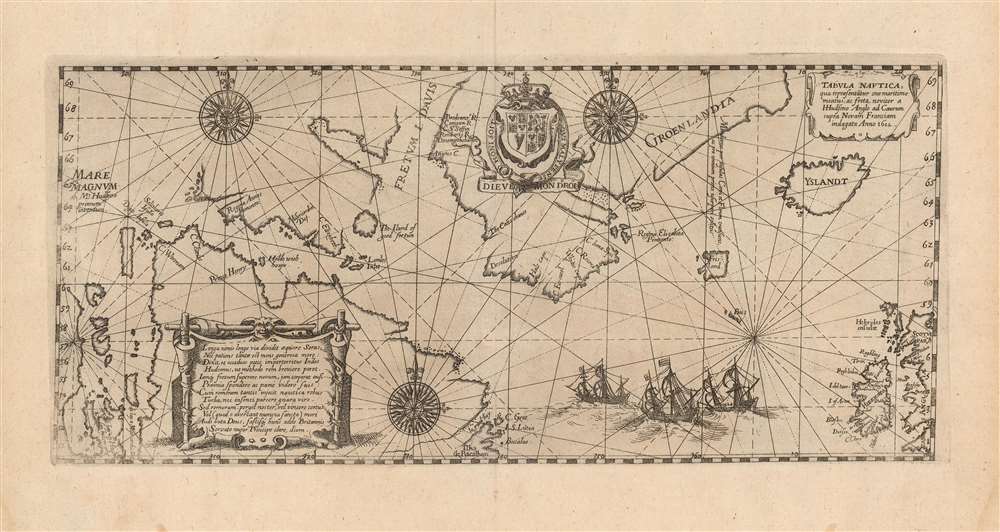 This is Johann Theodore De Bry's 1613 edition of Hessel Gerritz' chart of the North Atlantic and the Canadian Maritimes, based on the reports of Henry Hudson's fourth, final voyage. Predated only by Gerritsz' much rarer 1612 issue, this is the first map of Hudson Bay and the surrounding region, and remained the best chart of the northern regions of Canada for decades. The chart reaches from the British Isles to the western shore of James Bay, extending from 50° - 70° N.

Canada and the Maritimes

To the west, Hudson's Bay is named 'Mare Magnum ab M. Hudsono primum inventum.' (Great sea, first found by Mr. Hudson). By terming it the 'Mare Magnum', Hudson was suggesting that the body of water was, in fact, the Pacific Ocean - a notion supported by the absence of a western shore. At its southern extent, and in more detail, is James Bay, here marked (in Latin) 'the bay where Hudson did winter.' While no passages westward are shown in James Bay, the lack of any clear indication that no passages further westward from Hudson's Bay existed proved a spur to explorers throughout the 17th and 18th centuries, as explorers continued to seek a Northwest Passage to the Pacific. The bay and the strait leading to it includes many placenames, some familiar. Salisbury Island, Digges Islands, 'Holde with hoope' (Akpatok Island), the oddly named islands 'Lomles Inlet,' and 'The Iland of good Fortun,' which seems to be a misnaming of 'Loks Land Island' (named in no way for 'luck' but rather for Michael Lok, a 1570s London financier and one Frobisher's patrons).

The Canadian Labrador coast is shown from Hudson's Bay to the Strait of Belle Isle, here named Le Grand Bay. Beyond the strait is the north part of Newfoundland, here named Ilha de Bacalhao (Island of Cod). To the north is the southern part of Baffin Island, separated from Greenland by the Davis Strait.

Between Greenland and Iceland appears the imaginary island of Frisland - essentially a double mapping of Iceland based upon conflicting reports of its location. This spurious isle appeared first on the fraudulent 1561 Zeno map, but was nevertheless copied by numerous subsequent cartographers including Ortelius, Mercator, and Blaeu, and as here by Gerritz. Although appearing simply here, many of the maps of the 16th century afforded this nonexistent isle more detail than Iceland itself.

Another phantom, Bus or 'Buss Island' appears as well. This island was recorded during the third Frobisher expedition in 1578 by sailors aboard the ship Emanuel of Bridgwater. The Emanuel was a class of vessel known as a Busse, and its crew named the island for the type of vessel that its discoverers used. Today, it is generally believed that the sighting resulted from misinterpreted optical effects. This did not prevent one 'Thomas Shepard' from claiming in 1671 to have explored the island. Discoverers would miss Bus repeatedly despite the increase of Atlantic traffic in the 18th century: this resulted in later maps adjusting the supposed size of the island down until its location was labeled 'site of sunken island' on 19th century charts. In 1818 during his first Arctic expedition, John Ross sought the sunken island; finding no depth at 180 fathoms at the appropriate location, he concluded that it did not exist at all.

Johann Theodore de Bry, taught as he was by his goldsmith and engraver father, did not neglect the aesthetics of this map: a trio of ships cross the Atlantic, and the map is embellished by three superb compass roses. At top center are the British Royal arms. Upon an attractive strapwork cartouche drawn in the style of a stretched skin is a funerary epigram dedicated to Hudson, marooned by his mutineer crew to die in the bay now bearing his name.

This map was engraved by Johann Theodore de Bry for inclusion in the tenth volume of his Petit Voyages. While the books are reasonably well represented in institutional collections, the separate map only appears six times in OCLC.