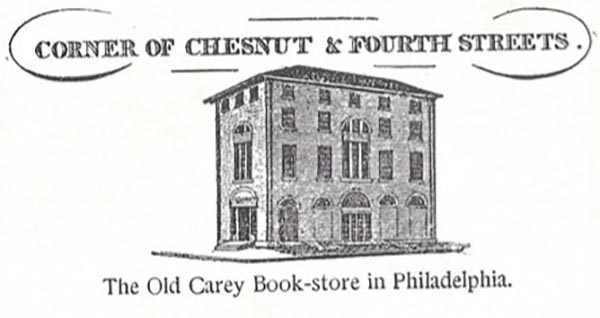 Abraham Hart (December 15, 1810 - July 22, 1885) was an American publisher of Jewish-Dutch descent based in Philadelphia. As a boy, Hart became an employee of the publishing firm Carey, Lea, and Carey. In 1829, when Edward Carey left his older brother Mathew Carey's firm, Edward and Hart joined forces, forming Carey and Hart. This firm became very well-known and was successful for twenty-five years, publishing works by Henry Wadsworth Longfellow, William Cullen Bryant, and Eliza Leslie. Hart married Rebecca Cohen Isaacks in 1831. Carey died at the age of 40 in 1845, but Hart continued the publishing firm until he retired in 1854, which marked the end of the Carey and Hart imprint. After retiring, Hart involved himself with industrial enterprises, and served both the Centennial Button-hole Machine Company and the American Button-hole Machine Company in an executive capacity. Hart was also an active member of the Jewish community in Philadelphia, serving for a time as president of the Jewish Congregation Mickvéh Israel, and assisting in Jewish educational and charitable enterprises.