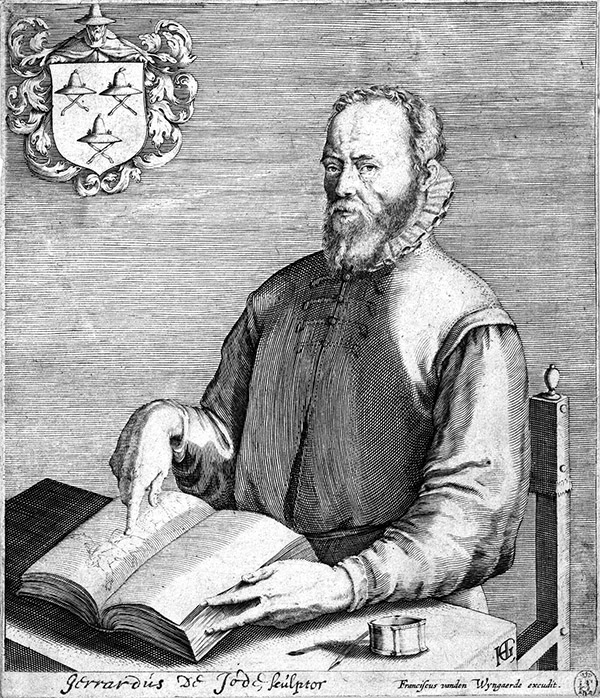 Gerard De Jode (1516 or 17 - February 5, 1591) was a Dutch publisher, engraver and cartographer active in Antwerp in the mid-to-late 16th century.  De Jode was born in Nijmegen.  Following a period as an apprentice and journeyman, (about which nothing comes down to us), he was admitted as a free master to Antwerp's artists' Guild of Saint Luke in 1547. He received the right to publish in that city in 1551. Henceforth he worked as a publisher and printseller in that city - although records also refer to him as a bookseller, art seller, map painter, engraver, and plate printer. He became one of Antwerp's most successful and prolific printers: he built up a large and varied stock of more than 1,200 prints and maps, and in addition to his own children maintained a shop and was taking on apprentices as early as 1549. De Jode's shop was home to many of Antwerp's best engravers, including the famous Van Doetecum brothers.

His publication in 1579 of the Thesaurus sacrarumhistoriarum veteris testamenti set the standard for over a century of Biblical illustration. His cartographic work began with the printing of other mapmakers' work (for example Gastaldi's map of the world in 1555, Jacob van Deventer's map of Brabant in 1558, and Ortelius' eight sheet map of the world in 1564.) He is best known for his 1578 atlas Speculum Orbis Terrarum. Despite the excellence of this work, it performed poorly due to the overwhelming competition posed by Abraham Ortelius' Theatrum Orbis Terrarum, which had already been eight years in publication. Between the Theatrum's popularity (and Ortelius' superior political connections, employed successfully in a vigorous defense of his license and monopoly on the work) De Jode's atlas was never a strong seller. Gerard printed only one edition of the work, compared to something on the order of forty of the Ortelius atlas. Gerard de Jode planned an enlarged edition, but died before it could be finished. His son Cornelis de Jode completed the labor, publishing the Speculum Orbis Terrae in 1593. This edition, too, of the Speculum failed to compete with Ortelius' powerhouse. On top of that, much of the De Jodes' stock was actively purchased and destroyed by Ortelius and his executors in order to remove it from the market. Thus, oneresult of De Jode's ill-starred competition with Ortelius is that while most of Ortelius' maps are relatively ubiquitous on the market, all of De Jode's maps are rare on the market, and sought after by the discerning collector.