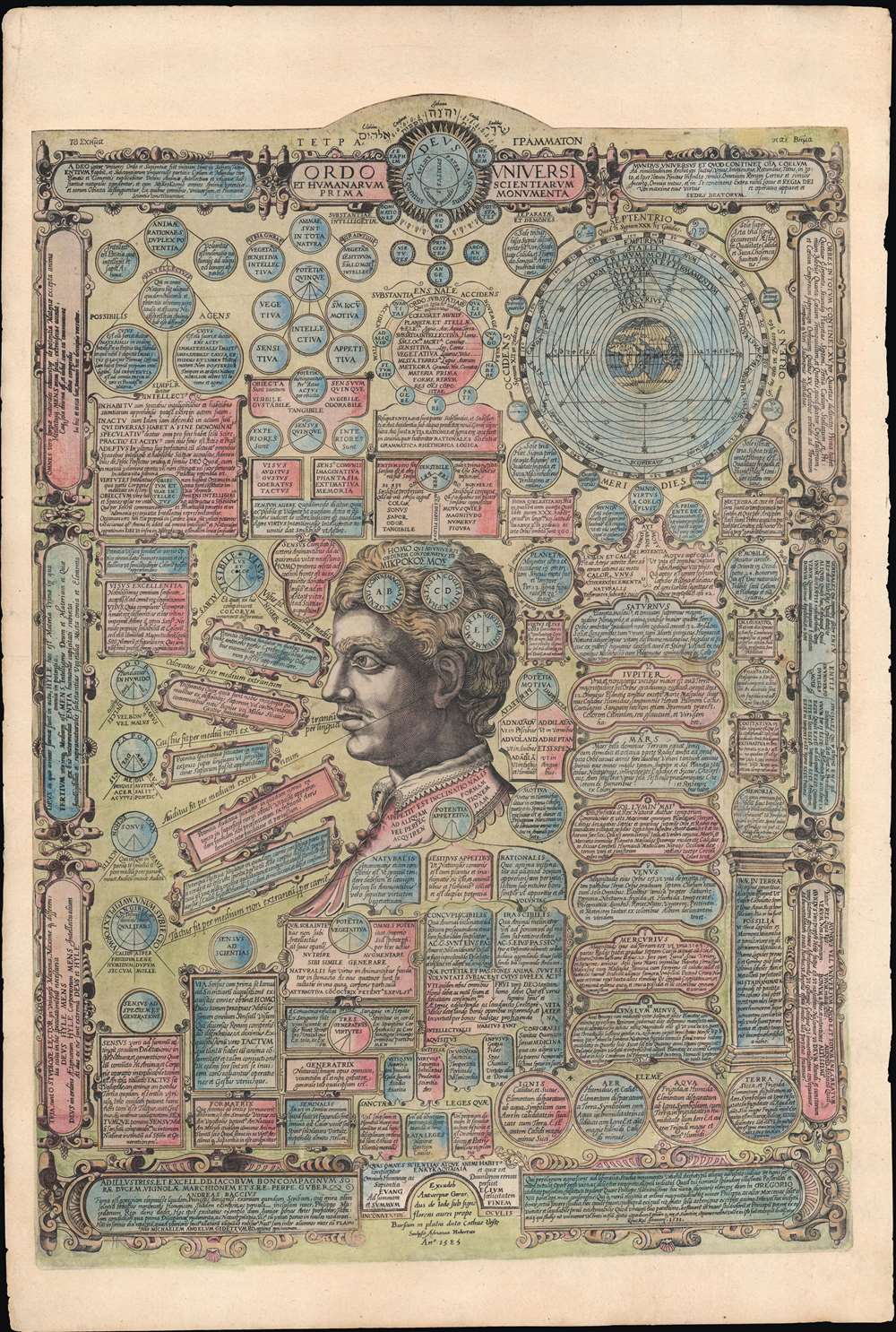 The essence of the Renaissance Humanism distilled into a single 1585 broadsheet!
$25,000.00

The essence of the Renaissance Humanism distilled into a single 1585 broadsheet publication. Extremely rare: a separately-issued cognitive broadside map printed in 1585 by Gerard De Jode, based on the papal physician Andrea Bacci’s conception of mankind’s place within the Cosmos - Bacci's proposition is noted centrally: 'Homo qui ad universi ordinem conformatus dicitur Μικροκοσμος' [The man, who is configured by the order of the universe, is a Microcosmos] What results is an elegant expression of Renaissance humanism. The diagram centers on Man, who by means of his senses and intellect (and by the Grace of God) is able to gather together knowledge to comprehend the universe around him. On the left (the direction the figure at the center is facing) the cognitive map describes the process whereby man's senses, intellect, memory, and even fantasy shape the possibilities of his decisions and actions resulting in various virtues, vices, sentiments and passions. The right-hand portion of the composition (behind our hero's back) depicts cosmography: an earth-centered solar system, explaining the subconscious influences of the planets and the elements (and the humors) on mankind's actions. These conscious and subconscious elements, then, are shown to mold the decision and action interchange.

Andrea Bacci's work was first engraved by Natale Bonifacio, in Rome in 1581 under the author's supervision; the piece was re-published in Antwerp in 1585 by De Jode, entirely reengraved by Adriaen Huberti. A further edition was produced by Galle in 1596. None of these iterations are catalogued more than once in OCLC; the present 1585 example is catalogued only in the Bibliothèque Nationale de France. Apart from the present example on offer, we know of no other in any edition to have appeared on the market. Hence, we consider this piece to be virtually unobtainable and a unique opportunity for the serious collector.

Gerard De Jode (1516 or 17 - February 5, 1591) was a Dutch publisher, engraver and cartographer active in Antwerp in the mid-to-late 16th century.  De Jode was born in Nijmegen.  Following a period as an apprentice and journeyman, (about which nothing comes down to us), he was admitted as a free master to Antwerp's artists' Guild of Saint Luke in 1547. He received the right to publish in that city in 1551. Henceforth he worked as a publisher and printseller in that city - although records also refer to him as a bookseller, art seller, map painter, engraver, and plate printer. He became one of Antwerp's most successful and prolific printers: he built up a large and varied stock of more than 1,200 prints and maps, and in addition to his own children maintained a shop and was taking on apprentices as early as 1549. De Jode's shop was home to many of Antwerp's best engravers, including the famous Van Doetecum brothers.

His publication in 1579 of the Thesaurus sacrarumhistoriarum veteris testamenti set the standard for over a century of Biblical illustration. His cartographic work began with the printing of other mapmakers' work (for example Gastaldi's map of the world in 1555, Jacob van Deventer's map of Brabant in 1558, and Ortelius' eight sheet map of the world in 1564.) He is best known for his 1578 atlas Speculum Orbis Terrarum. Despite the excellence of this work, it performed poorly due to the overwhelming competition posed by Abraham Ortelius' Theatrum Orbis Terrarum, which had already been eight years in publication. Between the Theatrum's popularity (and Ortelius' superior political connections, employed successfully in a vigorous defense of his license and monopoly on the work) De Jode's atlas was never a strong seller. Gerard printed only one edition of the work, compared to something on the order of forty of the Ortelius atlas. Gerard de Jode planned an enlarged edition, but died before it could be finished. His son Cornelis de Jode completed the labor, publishing the Speculum Orbis Terrae in 1593. This edition, too, of the Speculum failed to compete with Ortelius' powerhouse. On top of that, much of the De Jodes' stock was actively purchased and destroyed by Ortelius and his executors in order to remove it from the market. Thus, oneresult of De Jode's ill-starred competition with Ortelius is that while most of Ortelius' maps are relatively ubiquitous on the market, all of De Jode's maps are rare on the market, and sought after by the discerning collector.


Andrea Bacci (1524 - October 24, 1600) was an Italian physician, naturalist, philosopher, and humanist. He was born Born at Sant'Elpidio a Mare, and entered the medical profession at Serra San Quirico, around 1551. He wrote works on hydrology, pharmacology, zoology, mineralogy and (extensively) on enology. He served in Rome as chief physician to the Pope.


Adriaen Huberti (fl. 1573 - c. 1614) was a Flemish engraver and printer. He became a master and member of the Antwerp Guild in 1573. He is known to have engraved at least one broadsheet for Gerard De Jode, and also produced engravings under his own aegis for sale to the Spanish market.