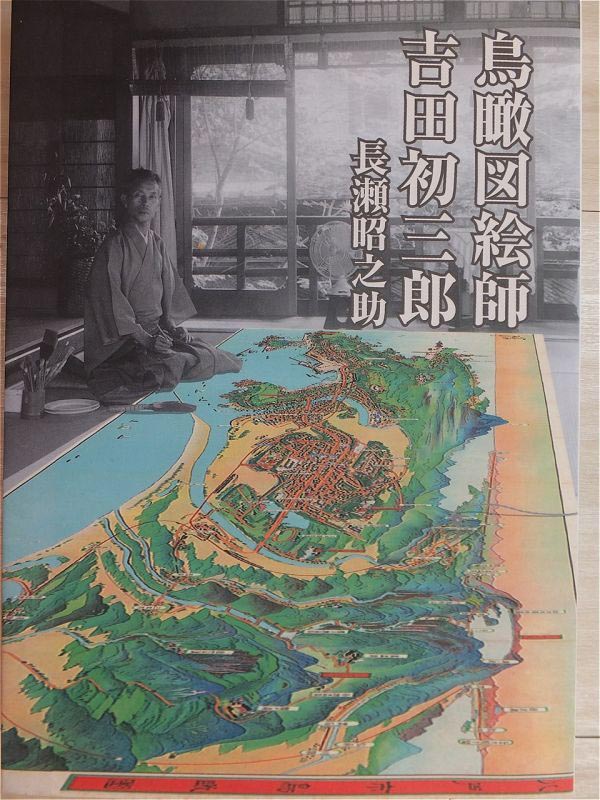 ﻿Yoshida Hatsusaburō (吉田初三郎, March 4, 1884 - August 16, 1955) was a Japanese illustrator and painter of birds-eye views active during the Taisho and Showa periods. Yoshida was born in Kyoto and apprenticed under Takeshiro Kanokgoi (1874 - 1941). Yoshida is significant for pioneering the use parallel perspective birds-eye views to illustrate Japanese bus and railroad transit networks. His first birds-eye view, completed in 1914, illustrated the Keihan railway and was highly praised by no less than Hirohito, then a prince but soon to be the Shōwa Emperor. With the Emperor's approval, Yoshida's views became widely popular and were adopted by the Ministry of Railways for the illustration all of its major public transportation networks. His style was so fashionable and distinctive that an entire genre was named after him (初三郎式絵図), and his works helped to spur a domestic tourism boom in the 1920s – 1930s. Most of his work consisted of city and regional views, though larger views encompassing the entirety of Japan do exist. Yoshida's most significant piece is most likely his rendering of the Hiroshima bombing, which was published in an English language magazine in 1949. He took on Tsunemitsu Kaneko as an assistant and apprentice in the early 1930s. Eventually Kaneko started making parallel perspective views of his own and became Yoshida's primary rival. Although he made over 3,000 maps in his lifetime, Yoshida was known to dedicate months to research and preparation for particular maps. For his 1949 Hiroshima map and his striking depiction of the Great Kanto Earthquake of 1923, he adopted a journalistic approach and spoke to many survivors of the disasters.

1925 Yoshida View of Gifu, Cormorant Fishing on the Nagara River