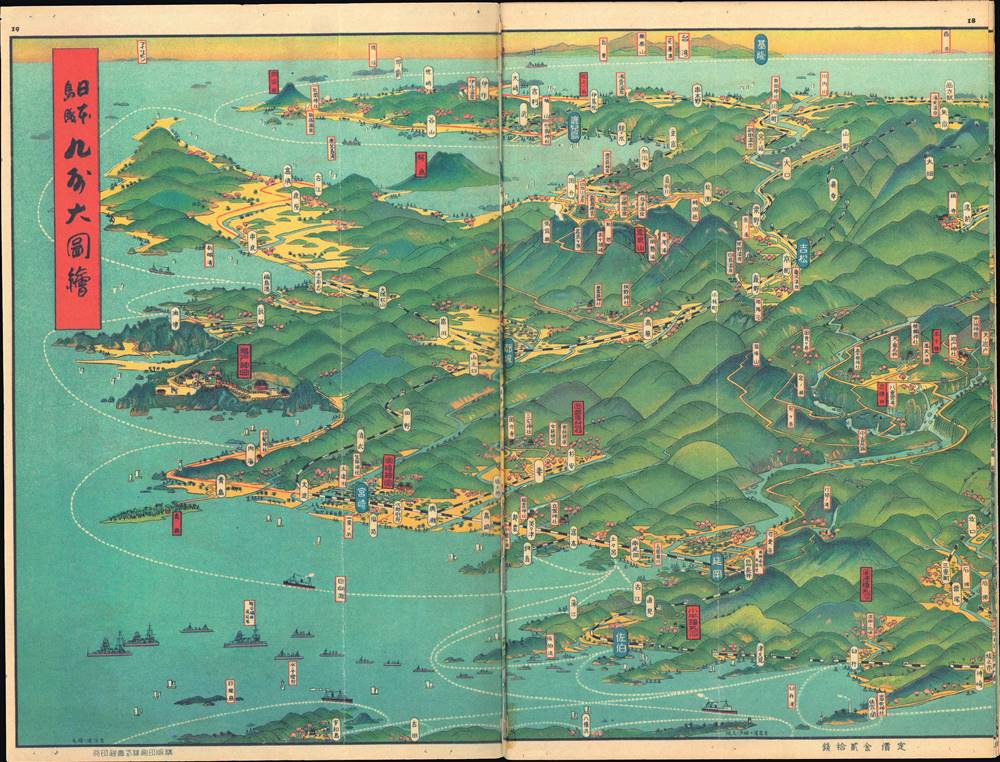 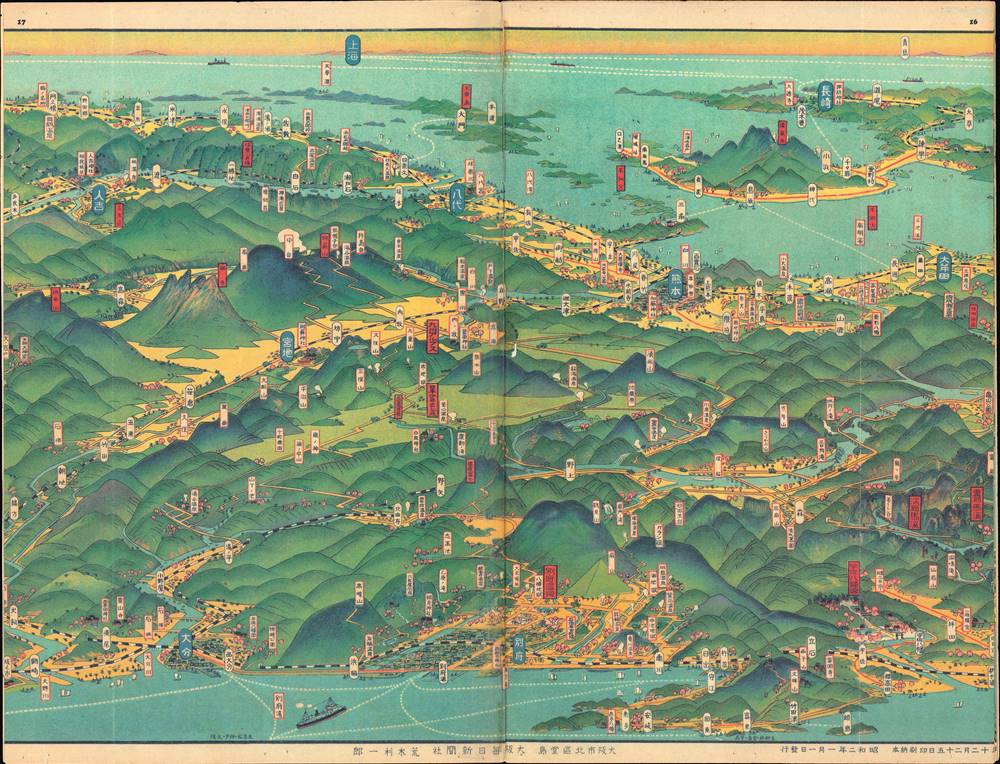 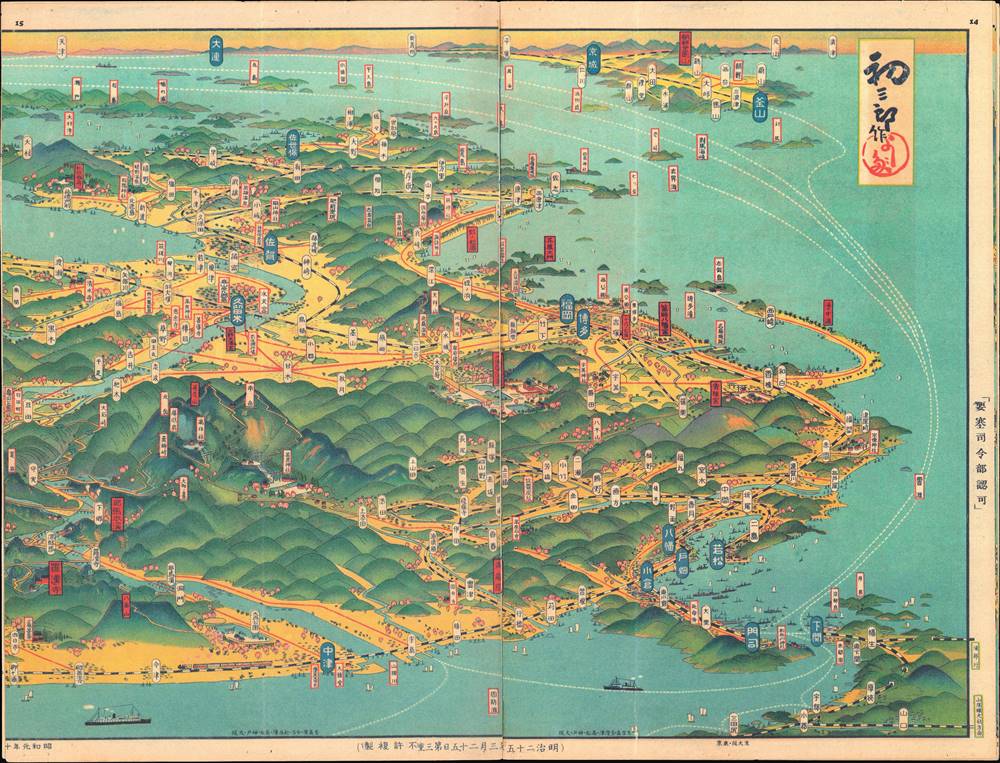 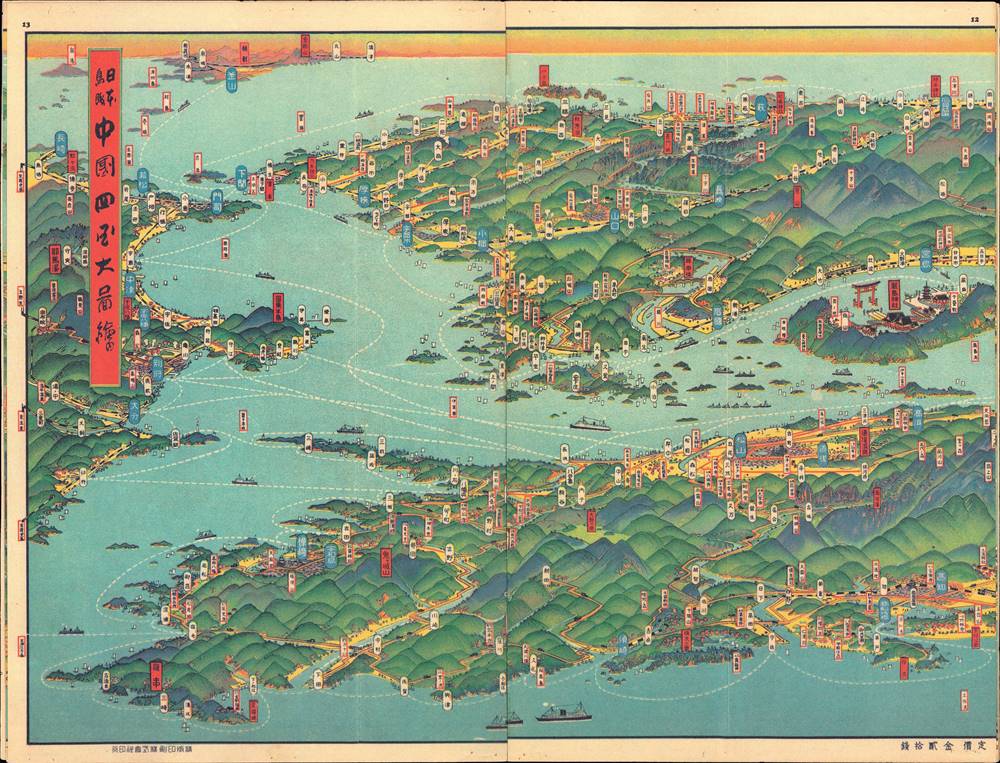 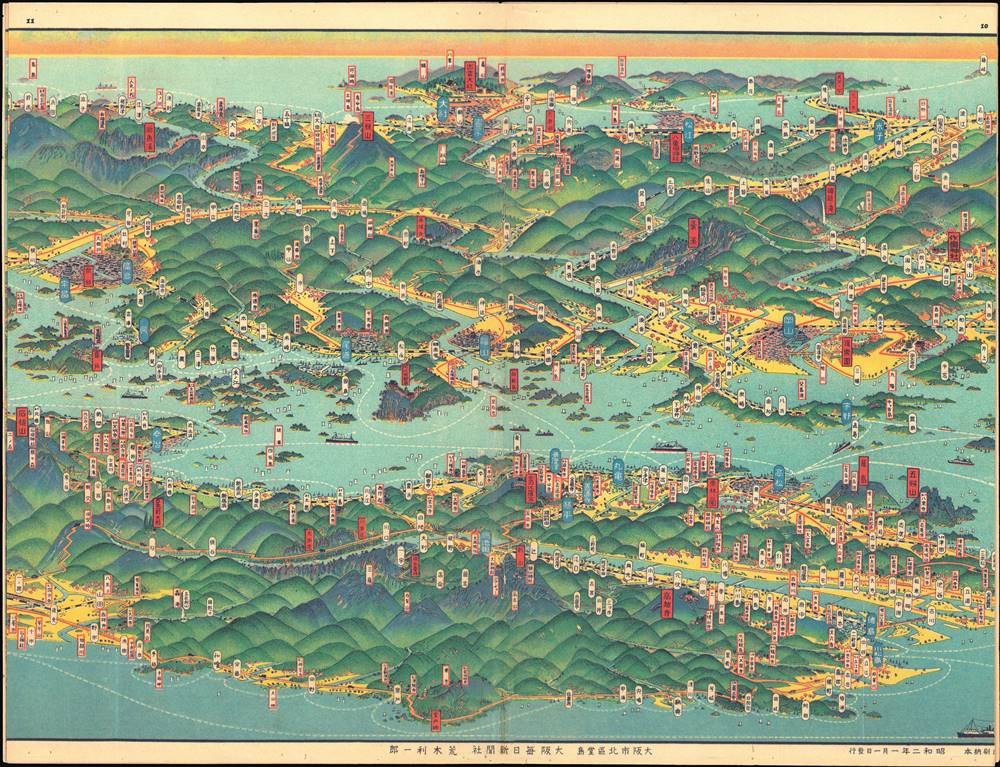 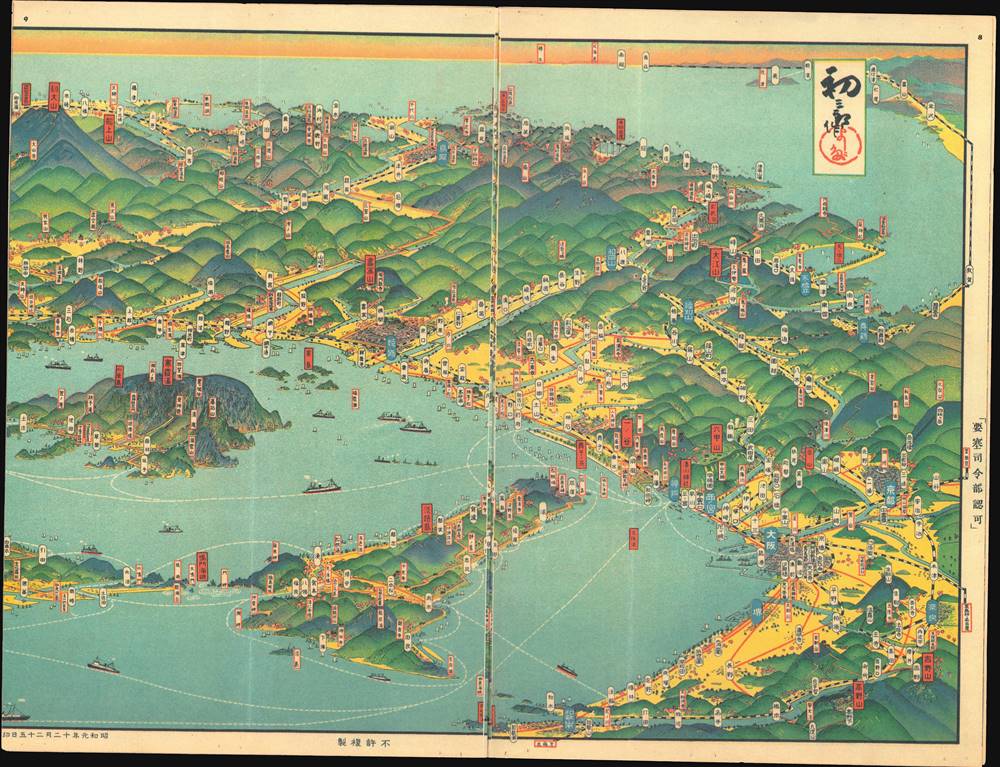 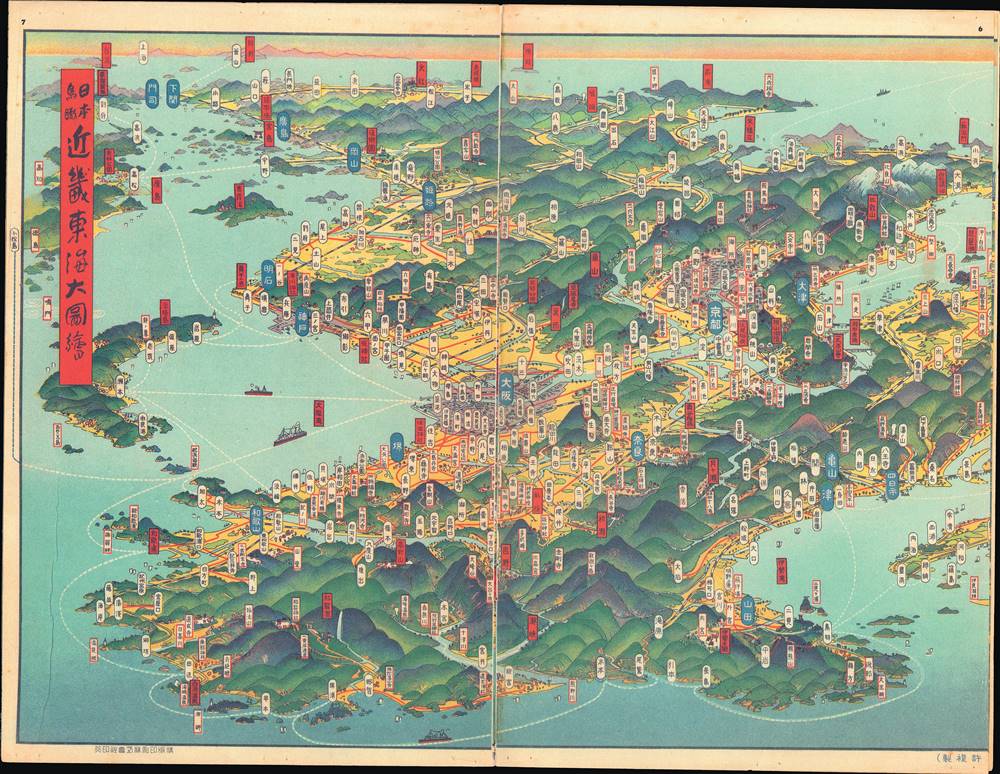 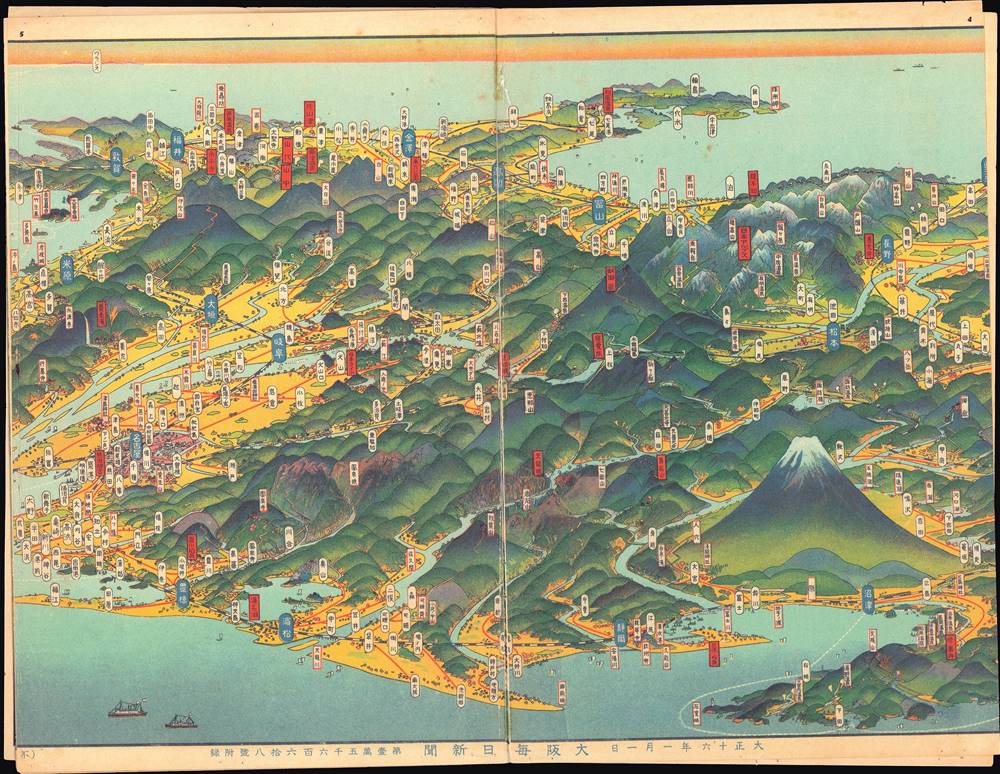 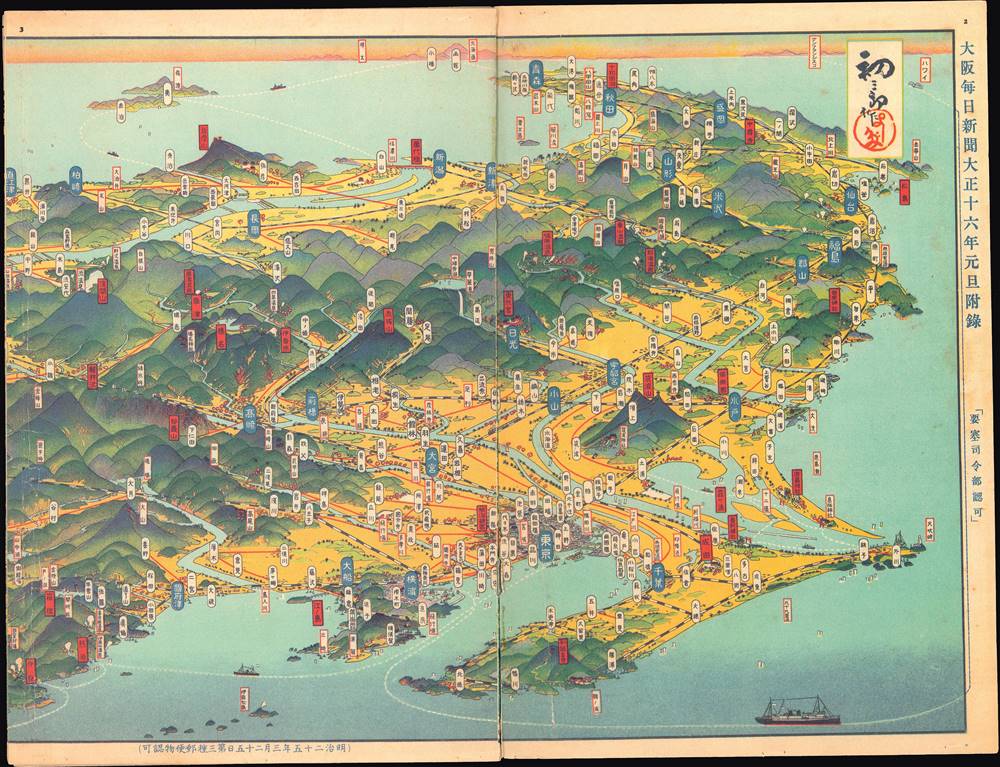 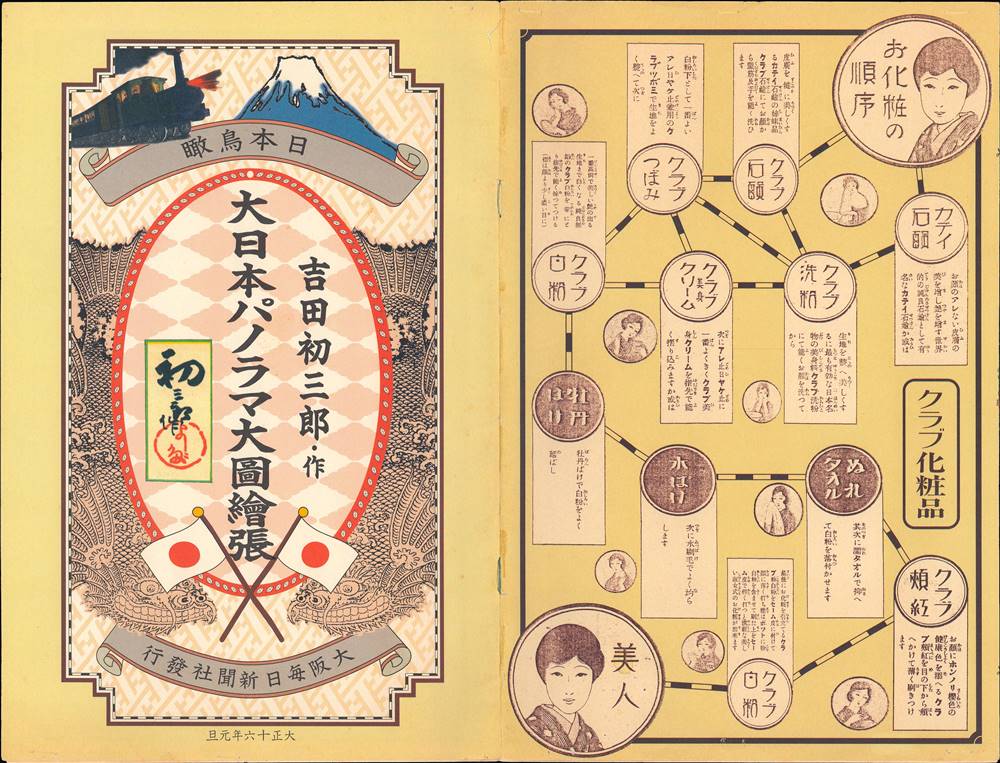 This is a beautiful 1927 panoramic view of Japan drawn by Yoshida Hatsusaburō and published by the Osaka Mainichi Shimbun. The view is published in atlas format, with pages printed on both sides. It is divided into three sections, each consisting of six pages, covering the entirety of Kyūshū, Honshū, and Shikoku.

The view is subdivided into three panoramas, each consisting of six back to back pages in the stapled pamphlet. They range across the entirety of the Japanese archipelago, except for the Ryūkyūs, Hokkaido, and Karafuto (southern Sakhalin), which at that time was considered part of 'mainland Japan' (as opposed to colonial possessions like Taiwan and Korea). At the same time, Japan's empire and areas just beyond it in China are alluded to on the horizon, and while the views adopt slightly different perspectives, they are all oriented towards mainland Asia to the west. This could be seen as an implicit endorsement of Japan's self-conception as the most advanced Asian nation, radiating its benevolent influence throughout Asia. They also give a sense of the mountainous terrain of Japan, with only small areas of coastal flatland and plains, mostly in the Kanto and Kansai regions, where cities could develop.

The first of these (日本鳥瞰九州大圖繪) covers the southern island of Kyūshū, including the cities of Kagoshima, Nagasaki, and Fukuoka, with Keelung (Taiwan), Hong Kong, Shanghai, Dalian, Pusan, and Keijo (Seoul) noted on horizon. The second view (日本鳥瞰中國四國大圖繪) depicts the southern portion of Honshū (Chūgoku, 中國) and the island of Shikoku (四國), including Shimonoseki, Yamaguchi, and Hiroshima, and ending with Osaka and Kyoto at far-right. The third view (日本鳥瞰近畿東海大圖繪) focuses on areas near Tokyo and the eastern coast of Honshū. The first panel is oriented towards the southwest, looking all the way south to Shimonoseki at top through to Osaka and Kyoto in the foreground. The second panel is shifted more directly towards the west, taking in Nagoya, Shizuoka, and Mt. Fuji. Finally, the third panel looks towards the northwest, taking in Tokyo, Yokohama, and the northern part of Honshū, with Hokkaido on the horizon.

The back side of the cover is an advertisement for Club Cosmetics (クラブ化粧品), showing the process of applying various creams and powders, leading ultimately to beauty (美人). The advertisement reflects the balance between traditional makeup styles and increasingly popular Western-influenced styles common to the Japanese cosmetics industry at this time. It also hints at changing gender norms in Taishō Japan, where women were more likely than in the past to be literate, engaging in consumption, and active in public spaces.

The views are noted as having been approved by the military (要塞司令認可), likely in order to ensure they did not reveal any important military installations.

The End of Taishō Democracy

This view was published in the 1927 new year's edition of the Osaka Mainichi. The new year was especially symbolically important that year as the Taishō Emperor had died just the week before, replaced by his son Hirohito, enthroned as the Shōwa Emperor (who had effectively been ruling as prince regent since 1921). Though his reign was far shorter than his father or son and he was never considered an especially capable sovereign (he suffered from neurological conditions as a result of childhood illnesses and was known to be an eccentric), the Taishō Emperor did rule Japan during a period of general liberalization of society, greater experimentation, and a widening of political participation. In the early Shōwa period, by contrast, Japan moved towards hypernationalism, militarism, and reactionary social values, and the Taishō era was written off as decadent, chaotic, and debauched. However, when Japan was democratized and demilitarized after World War II, the Taishō era was recast as a model to be admired and emulated.

This set of views is related to sketchbook mailers (書簡圖繪), a genre of bird's-eye view that became very popular in Japan in the 1920s-1940s, depicting cityscapes from across Japan's growing empire. Each map was designed to be folded and packaged for safe and easy mailing, and often came with information about and photographs of the city on the verso. Although these maps are fascinating, beautiful, and educational, they also served a political function, informing Japanese audiences about the country and the empire, reinforcing a shared national identity. Yoshida Hatsusaburō was a pioneer and master of the genre, focusing primarily on cities in Japan and the country's railway network.

This view was drawn by Yoshida Hatsusaburō (吉田初三郎), printed by the Seiban Printing Co. (精版印刷株式會社), and published as a supplement (附錄) to new year's edition of the Osaka Mainichi Shimbun (大阪每日新聞). It is dated January 1, 1927, written as Taishō 16, but in reality there was never a Taishō 16 as the Taishō Emperor died on Christmas Day, 1926 (Taishō 15 / Shōwa 1). Therefore, the cover must have been printed before the emperor's death. However, the views themselves are dated as if they were printed after the emperor's death, noted as printed on December 25, 1926 (Shōwa 1, here 元年) and published January 1, 1927 (Shōwa 2).

The views are not known to be held by any institution and have no known history on the market as a combined set. They are only known to be held individually by the Nichibunken (International Research Center for Japanese Studies); these appear to have been published separately by Osaka Mainichi with unique covers. The Nichibunken, Kyoto Prefectural Library and Archives, and Fukui Prefectural Archives have a very similar view (titled 近畿を中心とせる名勝交通大鳥瞰圖) to the third one in this set (近畿東海大圖繪), dated April 1926 and published with a unique cover. Aside from the differing titles, the views are distinct in other ways; for example, the title and the box containing Yoshida's signature are flipped, with the title at the upper-right and signature box at upper-left. There is also extensive information on the verso (back), as was typical of the sketchbook mailer (書簡圖繪) genre.


﻿Yoshida Hatsusaburō (吉田初三郎, March 4, 1884 - August 16, 1955) was a Japanese illustrator and painter of birds-eye views active during the Taisho and Showa periods. Yoshida was born in Kyoto and apprenticed under Takeshiro Kanokgoi (1874 - 1941). Yoshida is significant for pioneering the use parallel perspective birds-eye views to illustrate Japanese bus and railroad transit networks. His first birds-eye view, completed in 1914, illustrated the Keihan railway and was highly praised by no less than Hirohito, then a prince but soon to be the Shōwa Emperor. With the Emperor's approval, Yoshida's views became widely popular and were adopted by the Ministry of Railways for the illustration all of its major public transportation networks. His style was so fashionable and distinctive that an entire genre was named after him (初三郎式絵図), and his works helped to spur a domestic tourism boom in the 1920s – 1930s. Most of his work consisted of city and regional views, though larger views encompassing the entirety of Japan do exist. Yoshida's most significant piece is most likely his rendering of the Hiroshima bombing, which was published in an English language magazine in 1949. He took on Tsunemitsu Kaneko as an assistant and apprentice in the early 1930s. Eventually Kaneko started making parallel perspective views of his own and became Yoshida's primary rival. Although he made over 3,000 maps in his lifetime, Yoshida was known to dedicate months to research and preparation for particular maps. For his 1949 Hiroshima map and his striking depiction of the Great Kanto Earthquake of 1923, he adopted a journalistic approach and spoke to many survivors of the disasters. Learn More...