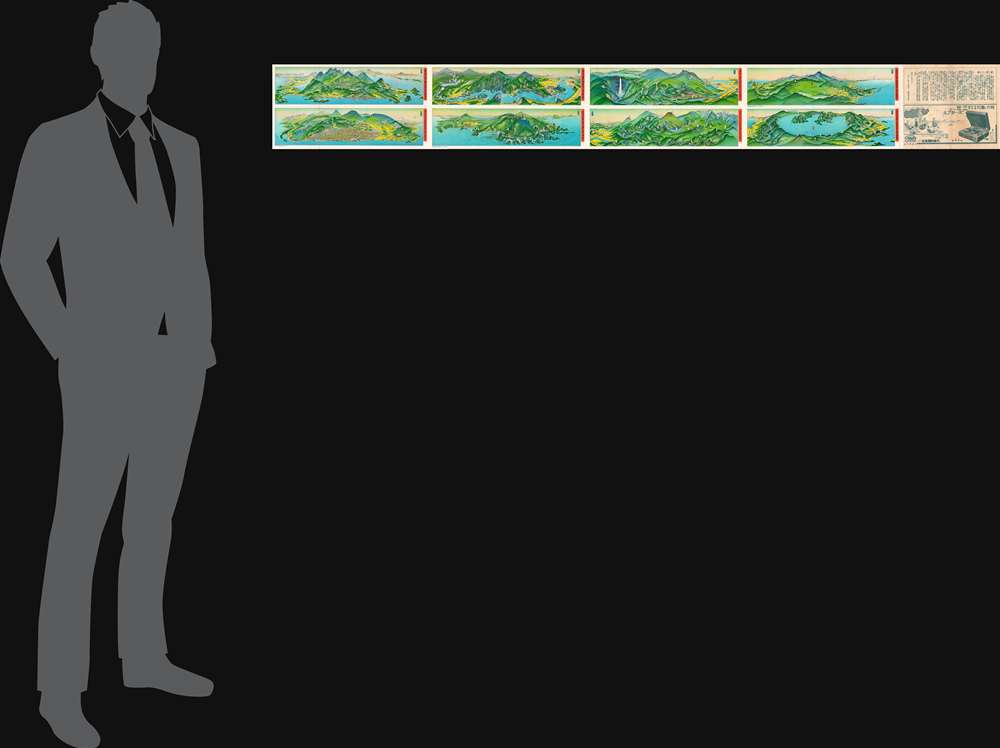 This is a beautiful 1930 (Shōwa 5) set of views of scenic sites in Japan drawn by Yoshida Hatsusaburō, perhaps the most prominent artist of views in Japan at the time. It was published as a supplement to Housewife's Friend (主婦の友), a popular monthly women's magazine. The views show the 'New' Eight Views of Japan, a cultural phenomenon at the intersection of national identity (or nationalism), mass media, mass consumption, and tourism, all of which flourished in this period.

These views were published in the wake of a 1927 campaign by the Osaka Mainichi Shimbun, Tokyo Nichi Nichi Shimbun, and the Railway Ministry of Japan, that aimed to select lists of beautiful and famous scenic sites in Japan, running a selection process for three distinct groups: the ‘New' Eight Views of Japan (日本新八景), the Twenty-Five Winning Sites (日本二十五勝), and the One-Hundred Sites of Japan (日本百景). The 'New' Eight Views of Japan were so named to distinguish them from 'old' sets of Eight Views described by poets and depicted by artists in earlier periods of Japanese history, such as the Eight Views of Kanazawa, themselves influenced by a Chinese tradition of Eight Views dating back to the Song Dynasty (akin to efforts to create new lists or variations of the Eight Wonders of the World).

The newspapers polled their readers to choose one of ten sites in eight different categories - mountains, valleys, waterfalls, hot springs, lakes, rivers, coasts, and plains. Sites that had already been nationally and internationally recognized for centuries, such as Mt. Fuji and the traditional Three Views of Japan (日本三景 Matsushima Bay, Amanohashidate, and Itsukushima) were excluded. The campaign was extremely popular and, as controls had not been introduced to prevent cheating, localities related to candidate sites clearly tried to gin up their vote count. In the end, the campaign received some 100 million votes, far exceeding the entire population of Japan at the time and the organizers felt justified in overruling voters by selecting Kamikōchi in the valleys category over the leading recipient of votes, Tenryū Gorge (天竜峡).

The ultimate list of the 'New' Eight Views depicted here are, from right to left:

At top-right is a panel titled 'One brush stroke to accompany the picture' (繪に添へて一筆), written by Yoshida to describe the selection of the Eight Views and venerate the sites chosen. On the recto, panels provide a tourist guide (游覽案内) for each site including photographs.

The art deco advertisements on the recto and verso highlight the connection between the 'New' Eight Views, tourism, and consumerism. The recto advertisement is for a portable phonograph produced by Seikōsha (精工舎), a subsidiary of the Seikō conglomerate. On the verso is a cosmetics advertisement for 'Master' brand whitening powder (マスター百番水白粉), which, like Housewife's Friend was geared towards married women. The text of the advertisement includes a supposed interview with a typical housewife, one Katakami-san, touting the powder.

The Views in Context

The selection of the 'New' Eight Views coincided with and was compelled by wider social, economic, and political processes, including mass consumption, the development of Japan's national park system, the maturation and integration of Japan's passenger rail network, the growth of domestic tourism, and a coalescing of national identity.

After considerable lobbying from citizens' groups, a National Parks Law was passed in 1931 and the first group of parks were established in 1934, with three of the sites (Mt. Unzen, Kegon Falls, Kamikōchi) of the Eight Views being included in this first group of parks and others being included in national parks established in later years. As passenger rail was the main means of long-distance transportation, the Railway Ministry had a clear interest in promoting both the new national parks and tourism to scenic sites more generally (Yoshida played an important role in these efforts and had originally made his name in the 1910s for his Railway Tourism Guide 鉄道旅行案内 views). Rail lines are prominently drawn in red in each of the views. Meanwhile, as Japanese politics were becoming increasingly nationalistic in this period, the government was eager to promote a vague yet powerful sense of 'national essence' (國體), in which the landscape of Japan played an important symbolic role. It is no coincidence that the 'New' Eight Views span the entire archipelago, from Hokkaidō to Nagasaki.

These views are reminiscent of and closely related to sketchbook mailers (書簡圖繪), a style of bird's-eye view that became very popular in Japan in the 1920s-1940s, which Yoshida largely defined. Sketchbook mailers most often depicted famous scenic sites or cityscapes from across Japan's growing empire. Each view was designed to be folded and packaged for safe and easy mailing, and came with information about and photographs of the site(s) depicted on the verso, as is the case here. Although these drawings are fascinating, beautiful, and educational, they also served a political function, informing Japanese audiences about the empire and helping to build a shared sense of national identity.

This set of views was printed on July 8, 1930 (Shōwa 5) and published as a supplement to the August 1, 1930 issue of Housewife's Friend (主婦の友). The views were drawn by Yoshida Hatsusaburō (吉田初三郎), printed by Takeuchi Kitarō (竹内喜太郎) of the Seiban Printing Co. (精版印刷株式會社), and published by Yashiro Noboru (八代登) of Housewife's Friend. It is only known to us to be held by the Nichibunken (International Research Center for Japanese Studies) and is scarce to the market.

﻿Yoshida Hatsusaburō (吉田初三郎, March 4, 1884 - August 16, 1955) was a Japanese illustrator and painter of birds-eye views active during the Taisho and Showa periods. Yoshida was born in Kyoto and apprenticed under Takeshiro Kanokgoi (1874 - 1941). Yoshida is significant for pioneering the use parallel perspective birds-eye views to illustrate Japanese bus and railroad transit networks. His first birds-eye view, completed in 1914, illustrated the Keihan railway and was highly praised by no less than Hirohito, then a prince but soon to be the Shōwa Emperor. With the Emperor's approval, Yoshida's views became widely popular and were adopted by the Ministry of Railways for the illustration all of its major public transportation networks. His style was so fashionable and distinctive that an entire genre was named after him (初三郎式絵図), and his works helped to spur a domestic tourism boom in the 1920s – 1930s. Most of his work consisted of city and regional views, though larger views encompassing the entirety of Japan do exist. Yoshida's most significant piece is most likely his rendering of the Hiroshima bombing, which was published in an English language magazine in 1949. He took on Tsunemitsu Kaneko as an assistant and apprentice in the early 1930s. Eventually Kaneko started making parallel perspective views of his own and became Yoshida's primary rival. Although he made over 3,000 maps in his lifetime, Yoshida was known to dedicate months to research and preparation for particular maps. For his 1949 Hiroshima map and his striking depiction of the Great Kanto Earthquake of 1923, he adopted a journalistic approach and spoke to many survivors of the disasters. Learn More...

Very good. Some wear along the fold lines.
Looking for a high-resolution scan of this?