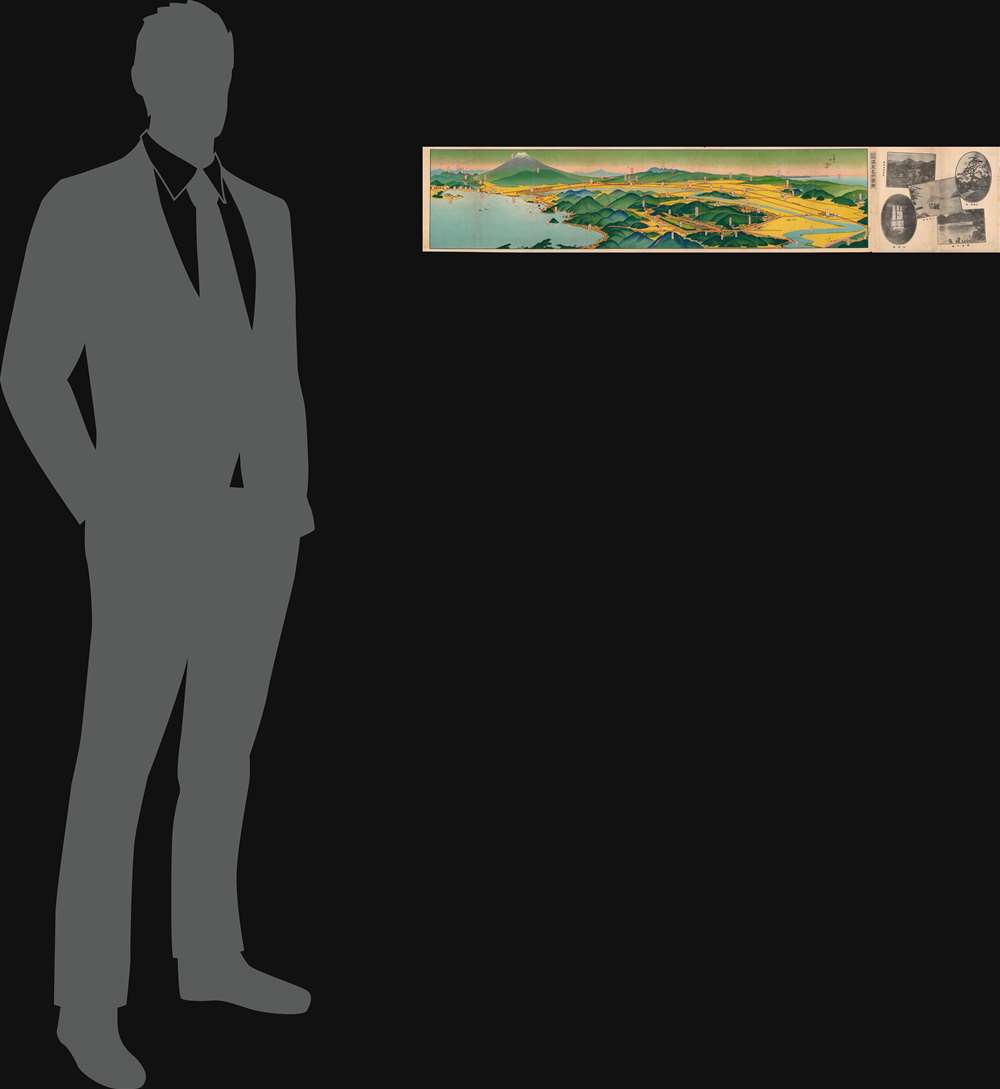 This is a scarce 1922 Yoshida Hatsusaburō bird's-eye view of Nagaoka on the Izu Peninsula in Shizuoka Prefecture. The view and the information on the verso focus on the area's hot springs (onsen), which became a popular tourist attraction in the years just prior to publication, in part due to the views of Mt. Fuji one could enjoy in Nagaoka.

Not to be confused with Nagaoka in Niigata, in the northwestern part of Honshu, the area illustrated here is on the Izu Peninsula in Shizuoka Prefecture, just to the south of Mt. Fuji, which appears in the background at left.

Izu-Nagaoka (officially called Kawanishi (川西村) until 1934) and its surroundings became a major tourist attraction in the early 20th century, thanks to the hot springs found there and the region's proximity to Mt. Fuji. Other nearby mountains are indicated in the background (Mt. Hakone, Mt. Ashitaka, Mt. Minobu, and Mt. Shichimen). The Japanese Alps are illustrated in the distant background.

In the foreground are the towns of Shizuoka Prefecture on the northeastern side of Suruga Bay and along the Kano River. Although many of the towns around Mt. Fuji became popular in the early 20th century, as both wealth and the rail network expanded, the hot springs of Nagaoka were a special feature to draw in tourists. In particular, the Nagaoka Hot Spring (長岡温泉) and the Kona Hot Spring (古奈温泉), including and surrounding the Yutani Shinto Shrine (湯谷神社), were popular destinations.

Aside from hot springs and mountain vistas, other attractions are indicated here, including a large park (公園地), a shooting range (射的場), and ancient stone sarcophagi (古代の石棺, the Kitaema Cave Tombs).

The train station at right in the foreground is Izu-Nagaoka, like other stations written here in kana (いづながをか) instead of kanji (伊豆長岡). Further to the right is a 'reverberatory furnace' (反射爐) used for smelting, a photograph of which appears in the panel at right.

Other towns, shrines, temples, and ancient burial sites are noted across the view. Coastal passenger ferry lines are indicated by dashed lines, while the Tokyo region is identified in the background at right.

The verso includes a short preface and acknowledgements by Yoshida at right, followed by a guide (案内) to the hot springs, including transportation and accommodations, and similar information on nearby scenic and historic sites.

This view is an example of a sketchbook mailer (書簡圖繪), a genre of bird's-eye view that became very popular in Japan in the 1920s-1940s, which Yoshida largely defined. Sketchbook mailers most often depicted famous scenic sites or cityscapes from across Japan's growing empire. Each view was designed to be folded and packaged for safe and easy mailing, and came with information about and photographs of the site(s) depicted on the verso, as is the case here. Although these drawings are fascinating, beautiful, and educational, they also served a political function, informing Japanese audiences about the empire and helping to build a shared sense of national identity.

This view was drawn by Yoshida Hatsusaburō (吉田初三郎) and published in October 1922 (Taishō 11) by Taishō Meisho Zuesha Gōshi Gaisha (大正名所圖繪合資會社), an apparently short-lived publisher based in Tokyo. The view is held by the National Diet Library and the Nichibunken (International Research Center for Japanese Studies) and is scarce to the market.

﻿Yoshida Hatsusaburō (吉田初三郎, March 4, 1884 - August 16, 1955) was a Japanese illustrator and painter of birds-eye views active during the Taisho and Showa periods. Yoshida was born in Kyoto and apprenticed under Takeshiro Kanokgoi (1874 - 1941). Yoshida is significant for pioneering the use parallel perspective birds-eye views to illustrate Japanese bus and railroad transit networks. His first birds-eye view, completed in 1914, illustrated the Keihan railway and was highly praised by no less than Hirohito, then a prince but soon to be the Shōwa Emperor. With the Emperor's approval, Yoshida's views became widely popular and were adopted by the Ministry of Railways for the illustration all of its major public transportation networks. His style was so fashionable and distinctive that an entire genre was named after him (初三郎式絵図), and his works helped to spur a domestic tourism boom in the 1920s – 1930s. Most of his work consisted of city and regional views, though larger views encompassing the entirety of Japan do exist. Yoshida's most significant piece is most likely his rendering of the Hiroshima bombing, which was published in an English language magazine in 1949. He took on Tsunemitsu Kaneko as an assistant and apprentice in the early 1930s. Eventually Kaneko started making parallel perspective views of his own and became Yoshida's primary rival. Although he made over 3,000 maps in his lifetime, Yoshida was known to dedicate months to research and preparation for particular maps. For his 1949 Hiroshima map and his striking depiction of the Great Kanto Earthquake of 1923, he adopted a journalistic approach and spoke to many survivors of the disasters. Learn More...

Good. Some sporadic foxing and wear along the fold lines. Small area of loss in bottom margin towards bottom-right.