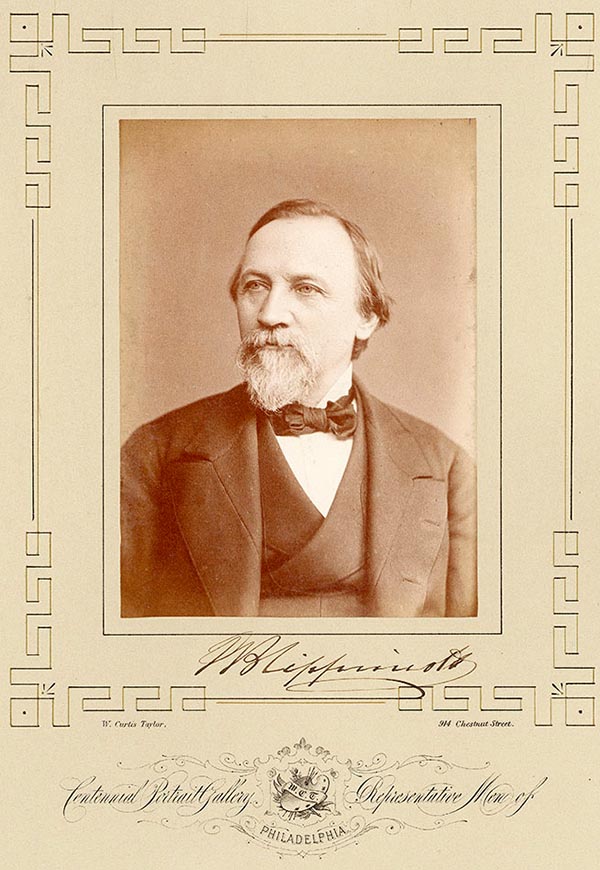 Joshua Ballinger Lippincott (March 18, 1813 - 1886) was the founder of J. B. Lippincott and Co. (1836-2002), an American publishing house founded in Philadelphia, Pennsylvania in 1836. Lippincot was born in Juliustown, New Jersey. He relocated to Philadelphia in 1827 where he worked at Clark's Bookstore (1827 - 1836). Clark's went bankrupt in 1836 and in the same year Lippincott started his own company. Meeting with considerable success, in 1849, he acquired the entire stock of the publishing house Grigg, Elliott, and Company. This acquisition positioned Lippincott as the primer publisher in Philadelphia. The next year, 1850, the firm reorganized and took a a new partner, Grumbo, emerging as Lippincott, Grumbo, and Company. In 1855, the partner Grumbo retired and the company name reverted to J.B. Lippincott and Company. He founded Lippincott’s Magazine in 1868 and the Medical Journal a few years later. In 1875, Lippincott founded an agency in London to import European literature into the United States. During his life he was a director of the Reading Railroad, the Philadelphia Saving Bank, the Union League Club, and the Academy of Fine Arts, as well as a trustee of the University of Pennsylvania. His firm became the J. B. Lippincott Company in 1878, and was subsequently acquired by Harper and Row Publishers in 1978. In 1995, Wolters Klumer N.V. of the Netherlands purchased the company, which became Lippincott-Raven Publishers in 1996 and Lippincott Williams and Wilkins in 1998. In 2002, the firm ceased to exist and became Wolters Kluwer Health.