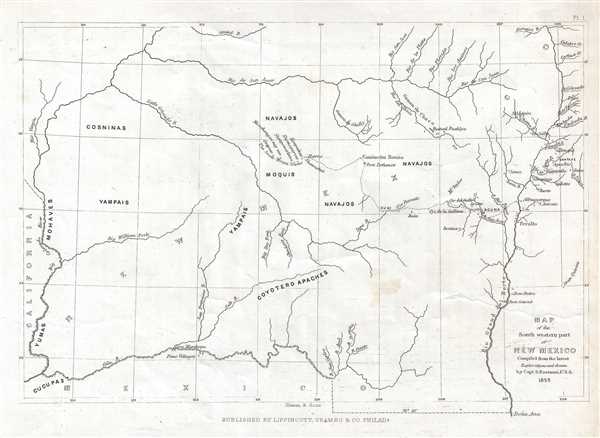 A definative early map of the Hopi (Moqui) pueblos in New Mexcio and Arizona.
$300.00

This is an 1853 Seth Eastman map of New Mexico and Arizona focusing on the seven Moqui or Hopi pueblos. The map depicts the region from the Colorado River to the Rio Grande del Norte and the cities of Santa Fe and Taos, New Mexico, and from Utah to the Gila River in Arizona. Numerous different American Indian tribal lands are labeled, mostly in the western part of the map, whereas nearly two dozen settlements, both labeled and unlabeled, line the banks of the Rio Grande. Albuquerque, Taos, and Santa Fe are labeled, along with creeks and rivers that are tributaries of the Rio Grande. Ruined pueblos are indicated along the Chaco river, and both Chaco Canyon and Canyon de Chelly (Ghelly) are also labeled.

This map was drawn by Seth Eastman and engraved by Illman and Sons for inclusion in Henry Rowe Schoolcraft's Information Regarding the History, Conditions, and Prospects of the Indian Tribes of the United States, which was published in six volumes between 1851 until 1857 by Lippincott, Grambo, and Company of Philadelphia.


Joshua Ballinger Lippincott (March 18, 1813 - 1886) was the founder of J. B. Lippincott and Co. (1836-2002), an American publishing house founded in Philadelphia, Pennsylvania in 1836. Lippincot was born in Juliustown, New Jersey. He relocated to Philadelphia in 1827 where he worked at Clark's Bookstore (1827 - 1836). Clark's went bankrupt in 1836 and in the same year Lippincott started his own company. Meeting with considerable success, in 1849, he acquired the entire stock of the publishing house Grigg, Elliott, and Company. This acquisition positioned Lippincott as the primer publisher in Philadelphia. The next year, 1850, the firm reorganized and took a a new partner, Grumbo, emerging as Lippincott, Grumbo, and Company. In 1855, the partner Grumbo retired and the company name reverted to J.B. Lippincott and Company. He founded Lippincott’s Magazine in 1868 and the Medical Journal a few years later. In 1875, Lippincott founded an agency in London to import European literature into the United States. During his life he was a director of the Reading Railroad, the Philadelphia Saving Bank, the Union League Club, and the Academy of Fine Arts, as well as a trustee of the University of Pennsylvania. His firm became the J. B. Lippincott Company in 1878, and was subsequently acquired by Harper and Row Publishers in 1978. In 1995, Wolters Klumer N.V. of the Netherlands purchased the company, which became Lippincott-Raven Publishers in 1996 and Lippincott Williams and Wilkins in 1998. In 2002, the firm ceased to exist and became Wolters Kluwer Health.

Schoolcraft, H. R., Information Regarding the History, Conditions, and Prospects of the Indian Tribes of the United States, (Philadelphia: Lippincott) 1854.