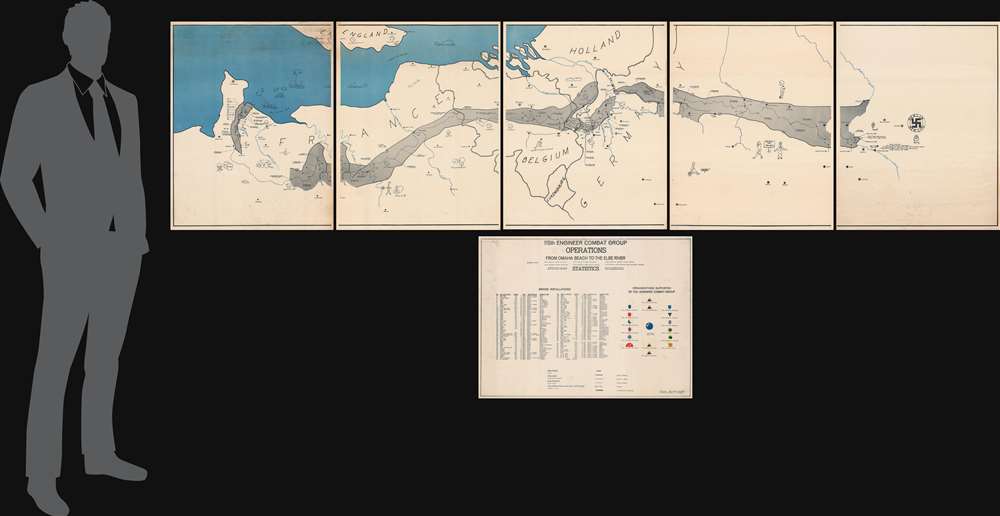 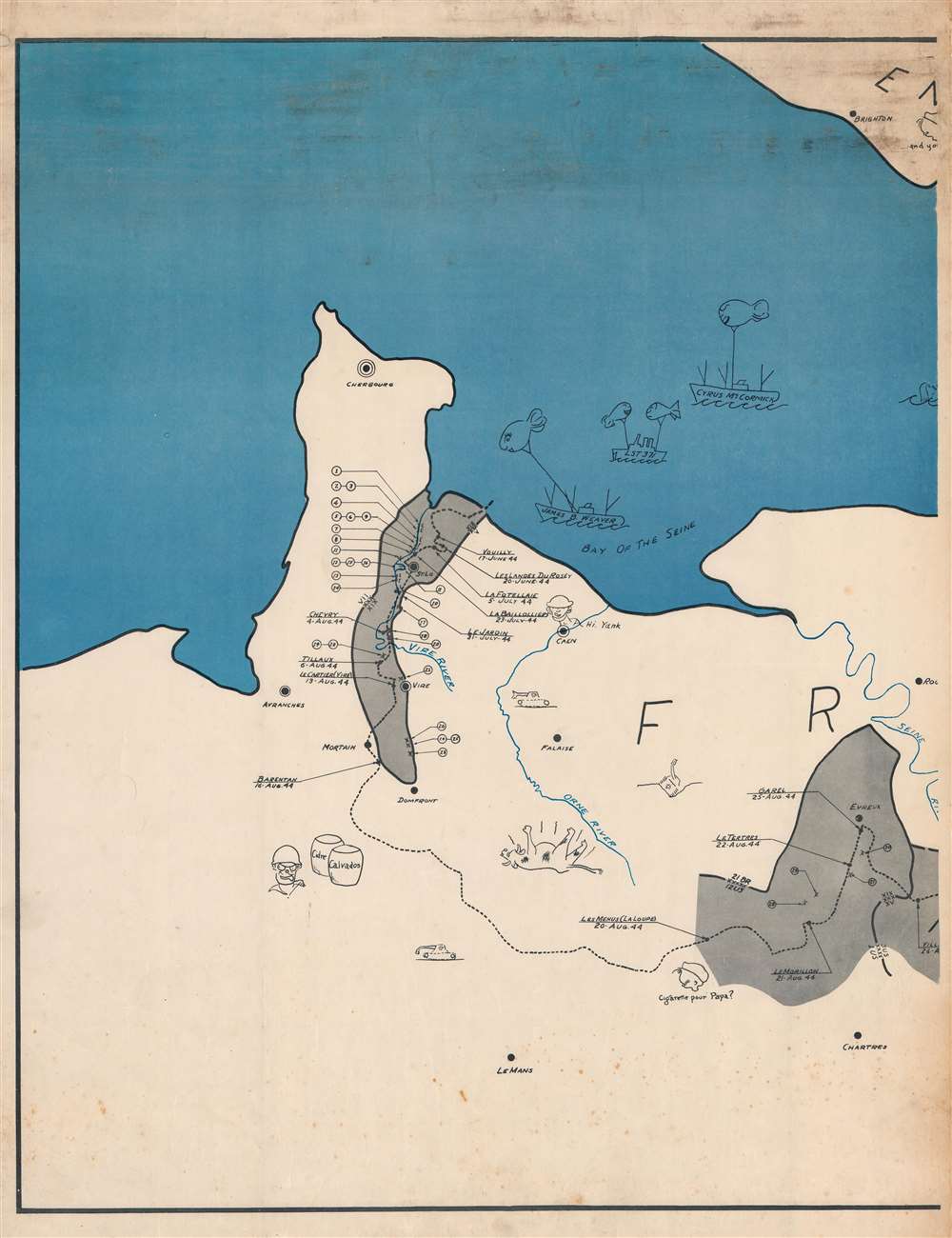 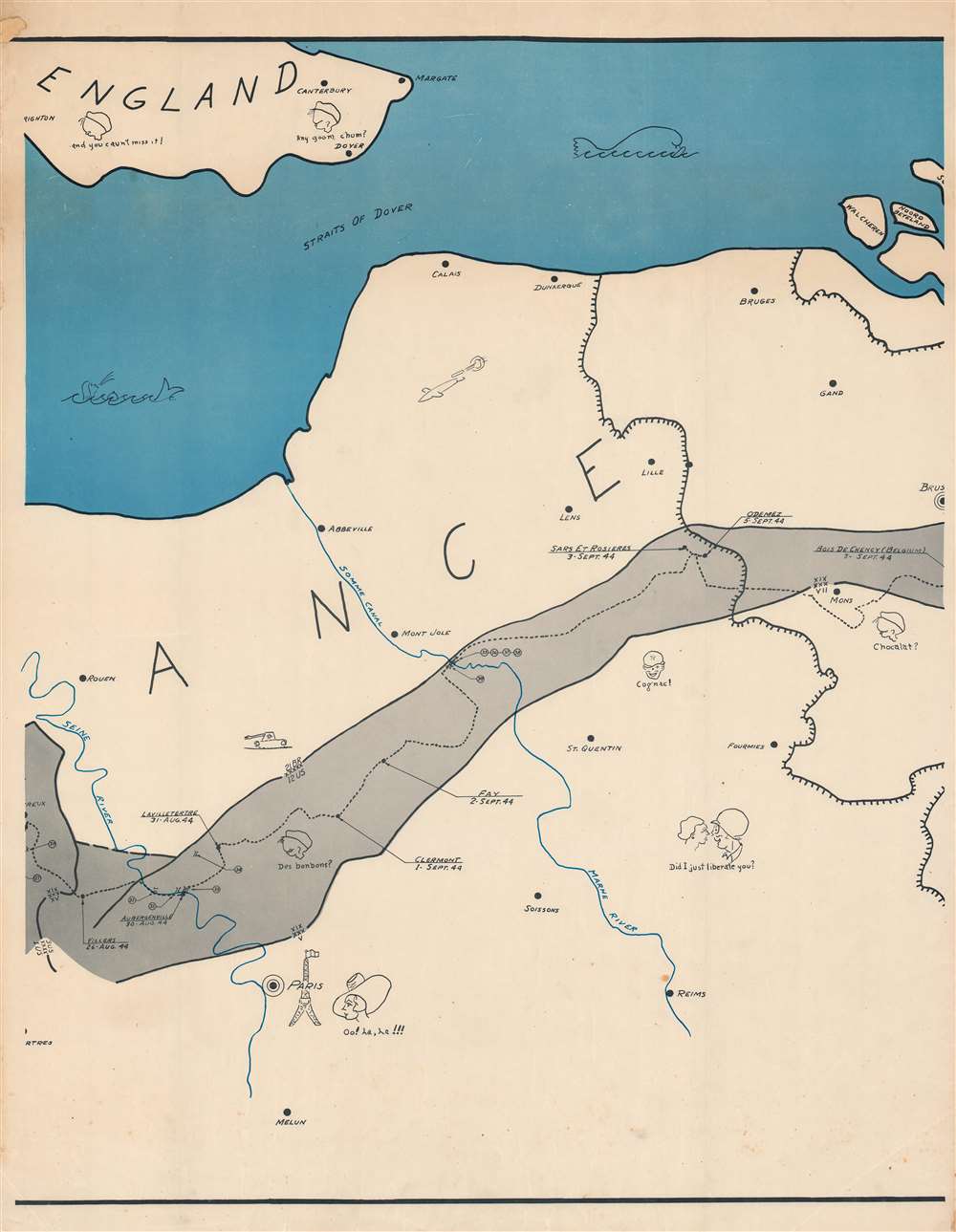 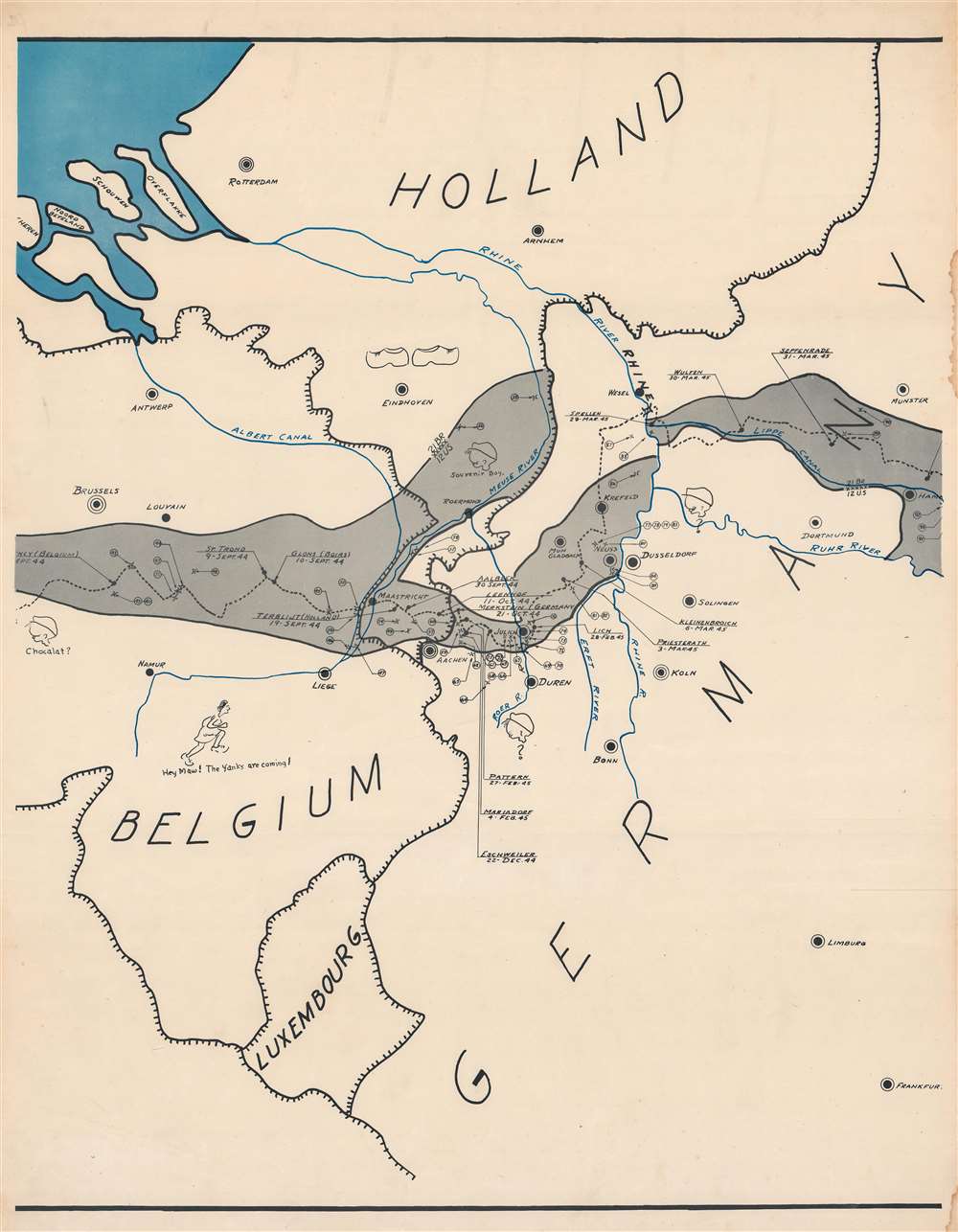 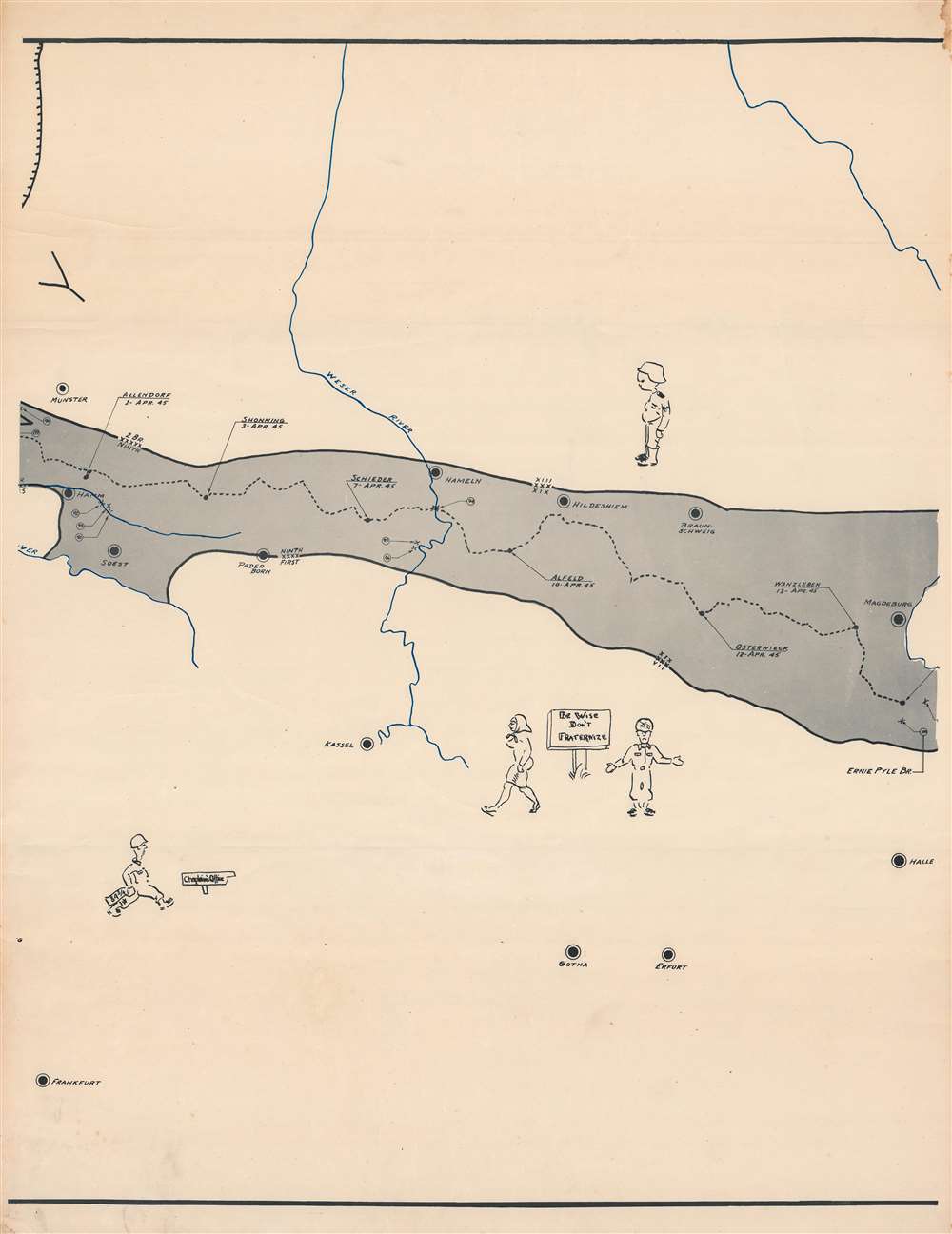 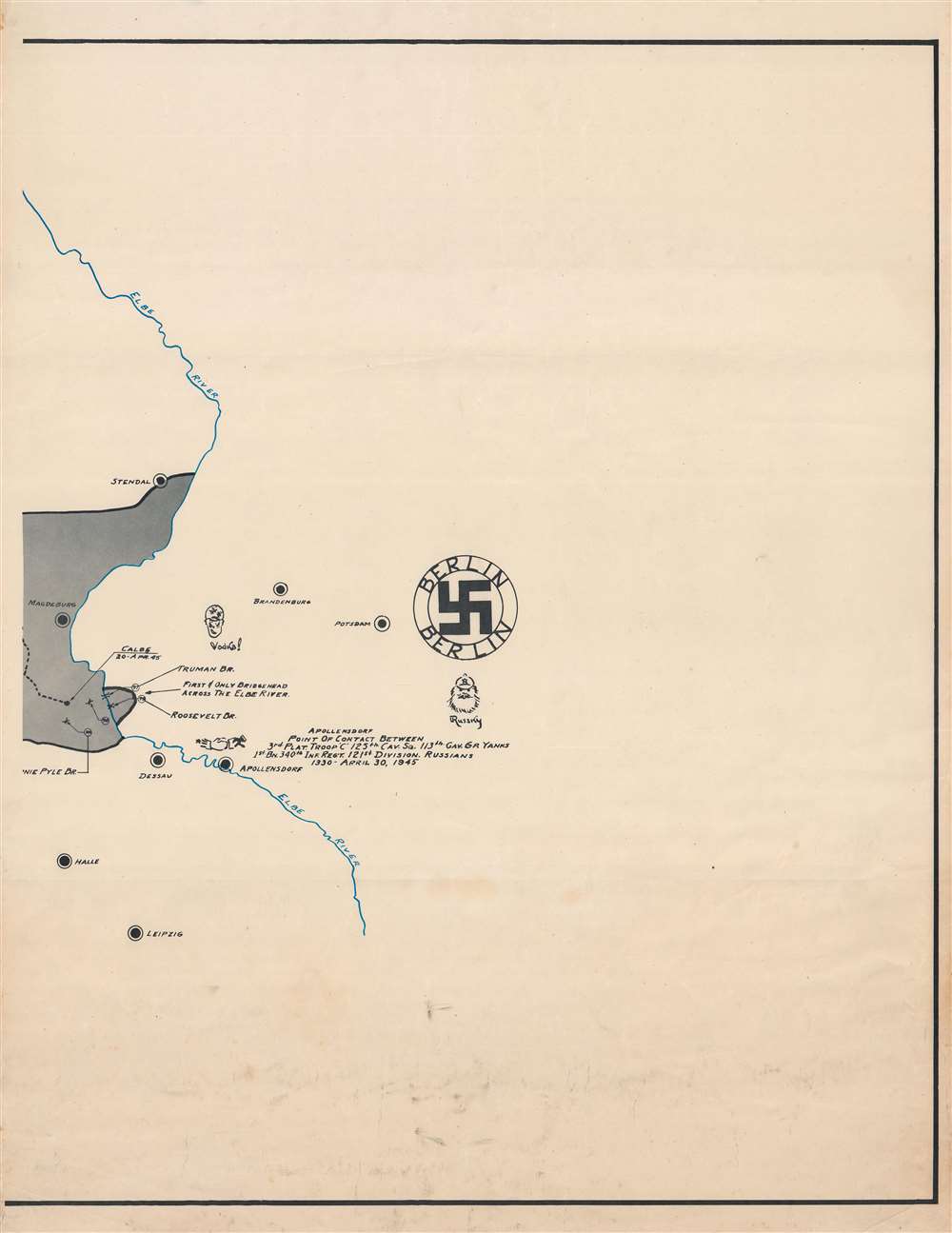 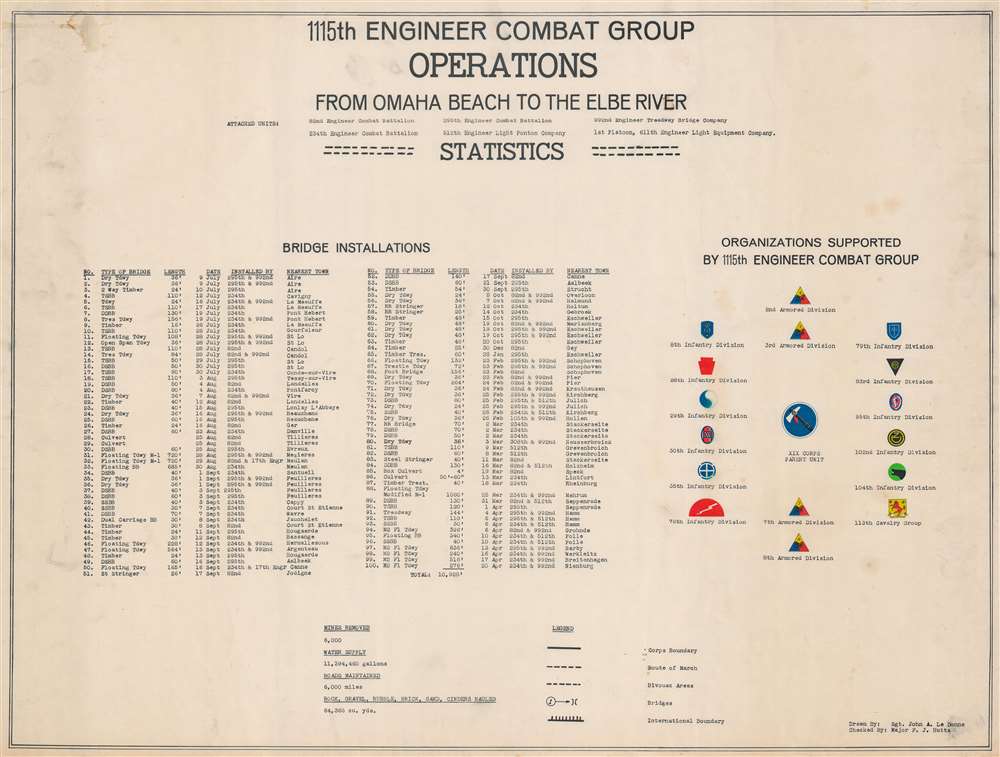 This is a monumental and impressive 1945 John A. LeDonne route map of Europe tracing the movements of the 1115th Engineer Combat Group during World War II. It is the largest and most impressive 'Route Map' to emerge out of World War II (1939 - 1945).

Areas shaded gray highlight where the 1115th operated: from Normandy through northern France, Belgium, and into Holland before traversing Germany to the Elbe River. The dashed line follows the 1115th 'route of march'. Underlined town accompanied by dates likely refer to the 1115th's establishment of command posts as it fought across the continent. 100 numbers in circles mark where units attached to the 1115th built bridges. These correspond with an index on the sixth sheet, which notes the type of bridge built, its length, the date of construction, and the nearest town. Some bridges were built at the same location twice, suggesting they were destroyed and rebuilt. Major cities included to provide geographical context.

Like many World War II route maps, LeDonne uses pictorial vignettes to highlight wartime experiences. Many depict children asking for candy, chocolate, cigarettes (supposedly for their father), or other things. The Eiffel Tower appears below the route of march, suggesting the men dreamed of seeing Paris. References to local alcohol (calvados and cognac) appear next to comic caricatures of inebriated soldiers.

One of the most common themes in these maps, fraternization, appears in a few places here. A portrait of a French woman appears next to the Eiffel Tower and exclaims 'Oo! La, La!!!' while looking at the tower. Further east, a wide-eyed and very excited G.I. stands nose to nose with a woman and says 'Did I just liberate you?', obviously hoping for a show of amorous 'gratitude'. The third reference, firmly in Germany, is woman walking away from a disappointed and confused G.I. Between them a sign reads, 'Be Wise Don't Fraternize'.

Maps tracing unit movements were created by American and British forces both during and after World War II. The genre is aesthetically broad, ranging from the purely functional with just placenames and dates, to the artistic, to the comic. Many combine the three engendering a visually striking and historically informative summary of a unit's peregrinations.

This map was drawn by the Sergeant John A. LeDonne and checked by Major F. J. Hutta. This map is not cataloged in OCLC, and we have not found any other cataloged examples. We are aware of only one other example in private hands. Rare Book Hub notes a single instance of this map at auction.

John Anthony LeDonne (March 4, 1912 - June 28, 1992) was an American engineer and U.S. Army World War II veteran. LeDonne lived in Pittsburgh, Pennsylvania, for most, if not all, of his life. He was working at the A. H. Mathias Blue Printing Company in Pittsburgh when he signed up for the Selective Service in October 1940 and was inducted into the Army as an engineer on September 1, 1943, and eventually became a member of the 1115th Engineer Combat Group. He served in Europe from March 11, 1944, until he returned to the United States on December 26, 1945, and was discharged on January 1, 1946. Learn More...

Good. Six sheets consisting of five map sheets and one index sheet. Light dampstaining and soiling on each sheet. Wear along margins on each sheet. Small margin tears professionally repaired on some sheets. Areas of infill in top left corner to first two sheets. Dimensions given are the composite dimensions of the five sheets as illustrated in the first image.