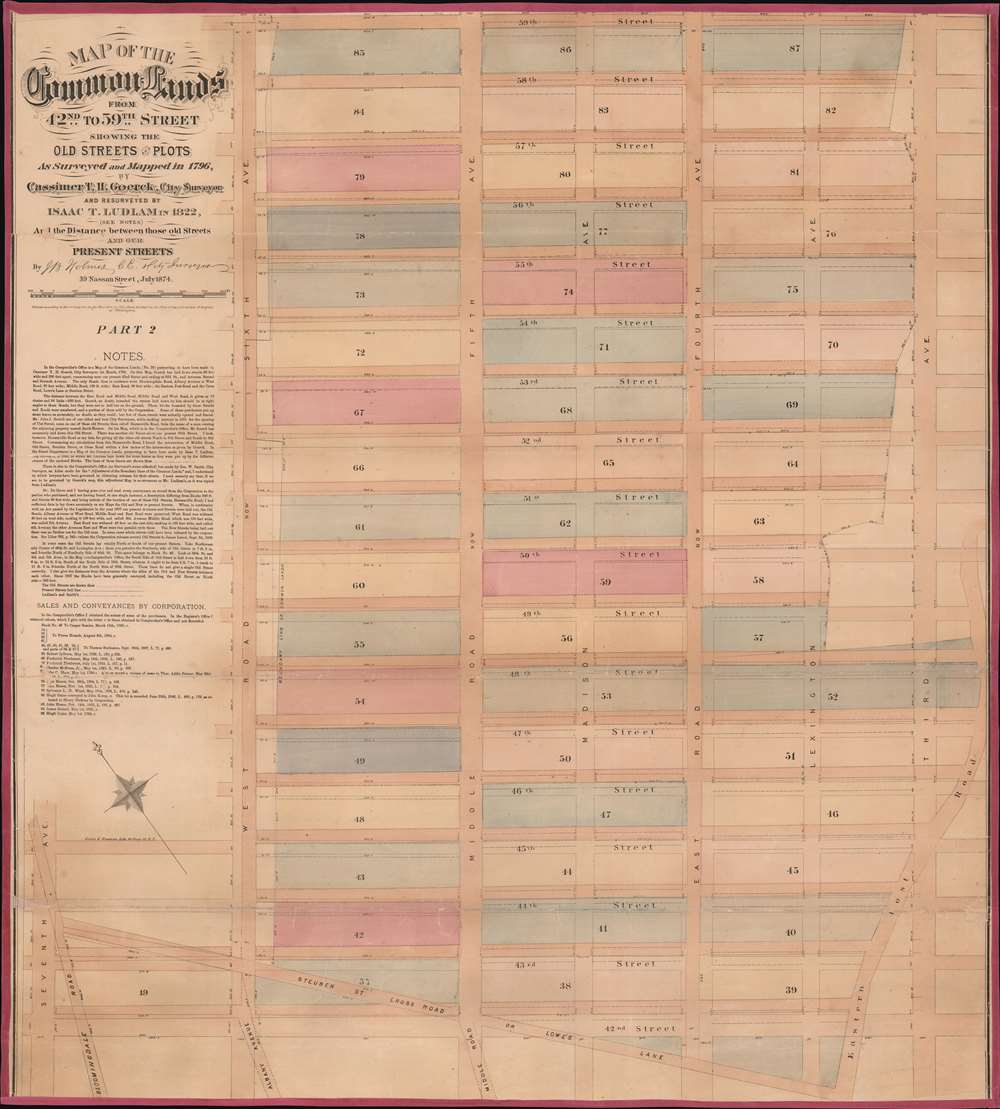 This is a John Bute Holmes 1874 cadastral map of Midtown Manhattan. The map depicts the region from Seventh Avenue to Third Avenue and from 59th Street to 42nd Street. A somewhat-confusing jumble of solid and dashed lines appears throughout the neighborhood, allowing the viewer to trace its development, particularly with regard to streets. Entire blocks were shifted between 1796, when Goerck first surveyed this part of Manhattan, and 1874, when Holmes created this work. Street angles changed, as did the width of both the streets and the avenues.

Albany Avenue, Steuben Street Cross Road, and the Eastern Post Road (also known as the Boston Post Road) were erased when the grid system was implemented. Bloomingdale Road, in the lower left corner, is known as Broadway today, thus illustrating the intersection of 42nd Street and Broadway, Times Square. At some point after Goerck's initial survey, both Madison Avenue and Lexington Avenue were cut down the middle of the blocks between Fourth Avenue and Fifth Avenue, and Fourth and Third Avenue, respectively, evident by how Holmes identifies each block by only one number and not two.

This map was created and published by John Bute Holmes in 1874. Two examples are identified in the OCLC as part of institutional collections at the New York State Library and the University of Wisconsin-Milwaukee. Although uncatalogued, we believe that the New York Public Library also has an example.


Neuman and Dinglinger Lithography (fl. 1880 - 1882) was a New York City based lithography and engraving firm based at the Northwest corner of Pearl and Elm Streets, New York City. Little is known of their business. They published an important chronological chart of American history, as well as maps for James Botsford Beers (1811 - 1901) and John Bute Holmes (1822 - 1887). In addition to maps, they also produced stunning chromolithograph trade cards for the tobacco industry. Most of their work dates to the early 1880s. Learn More...

Good. Laid down on fresh linen. Small areas of infill. Blank on verso.