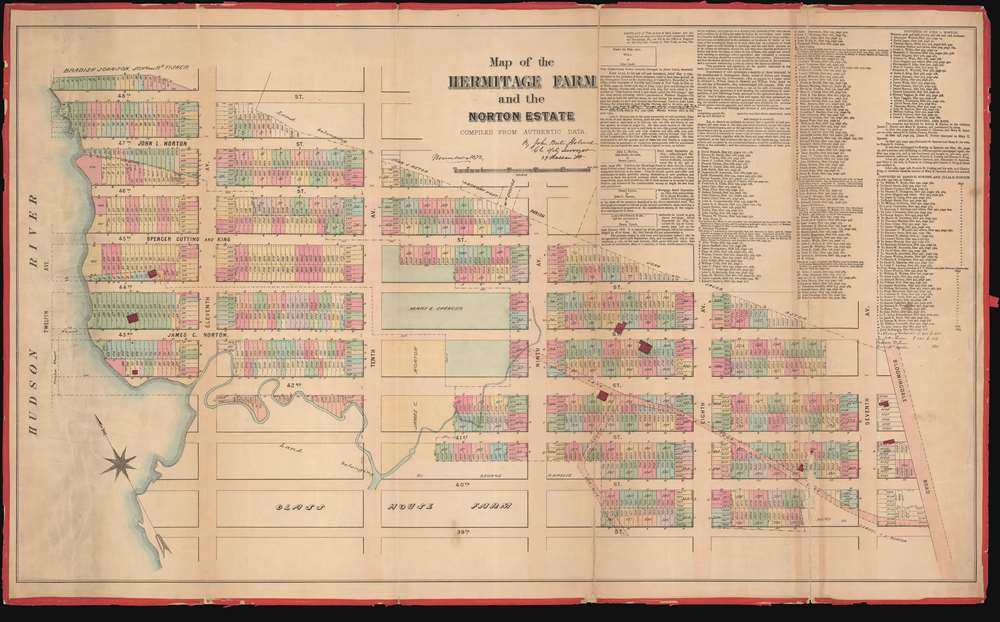 A map of Hell's Kitchen that traces the development of the neighborhood.
$4,000.00

This is an 1872 John Bute Holmes cadastral map of the modern-day neighborhood of Hell's Kitchen in the borough of Manhattan in New York City. The map depicts the neighborhood from the Hudson River to Broadway (labeled as Bloomingdale Road) and from 48th Street to 39th Street. Highly detailed, Holmes's map provides the viewer with a look at the neighborhood as it was in 1872 and also projects an image of how it developed. Streets are labeled, and individual lots are identified by their addresses. Some elements are ghosted in using dashed lines, including Twelfth Avenue and several wharves.

John George Leake (1752 - 1827), a wealthy New York lawyer, counted the Hermitage Farm among his many assets. Leake, who had no children or siblings, left the farm in his will to his niece Martha Norton, with reversion to her son John Leake Norton. The rest of his fortune, in sum over $300,000, was used to found a home for orphaned children operated by Trinity Church.

This map was created and published by John Bute Holmes in 1872. Three examples are recorded in the OCLC as being part of the collection at Princeton University, the New York State Library, and the University of Wisconsin - Milwaukee. The Museum of the City of New York also has an example in their collection as does, we believe, the New York Public Library, although their example is uncatalogued.