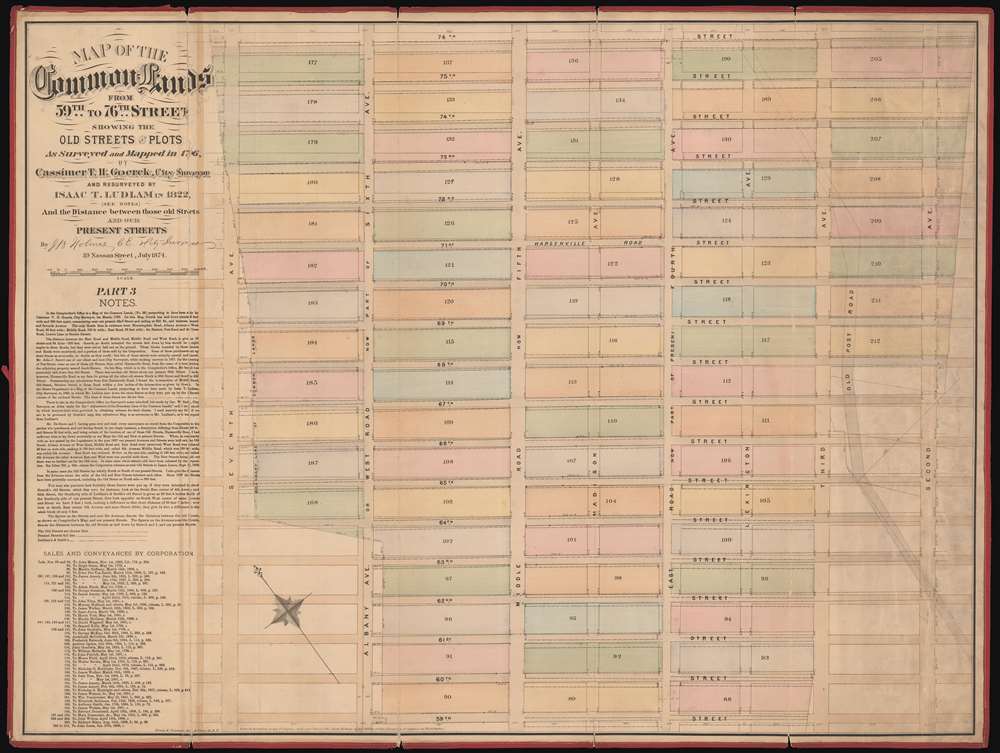 A 19th century map of the Lenox Hill neighborhood in Manhattan that traces the neighborhood's development.

This is a John Bute Holmes 1874 cadastral map of the Lenox Hill neighborhood of Manhattan. The map depicts the neighborhood from Seventh Avenue (or at least where it would be if Central Park hadn't been built) to Second Avenue and from 76th Street to 59th Street and the vast majority of the map is occupied by the Common Lands. A somewhat-confusing jumble of solid and dashed lines appears throughout the neighborhood, allowing the viewer to trace its development, particularly with regard to its streets. Entire blocks were shifted between 1796, when Goerck first surveyed this part of Manhattan, and 1874, when Holmes created this work. Street angles changed, as did the width of both the streets and the avenues. At some point after Goerck's initial survey, both Madison Avenue and Lexington Avenue were cut down the middle of the blocks between Fourth Avenue and Fifth Avenue, and Fourth and Third Avenue, respectively, evident by how Holmes identifies each block by only one number and not two.

This map was created and published by John Bute Holmes in 1874. Three examples are identified in the OCLC as part of institutional collections at Princeton University, the New York State Library, and the University of Wisconsin-Milwaukee. The Museum of the City of New York also has an example in their collection and, although uncatalogued, we believe that the New York Public Library also has an example.