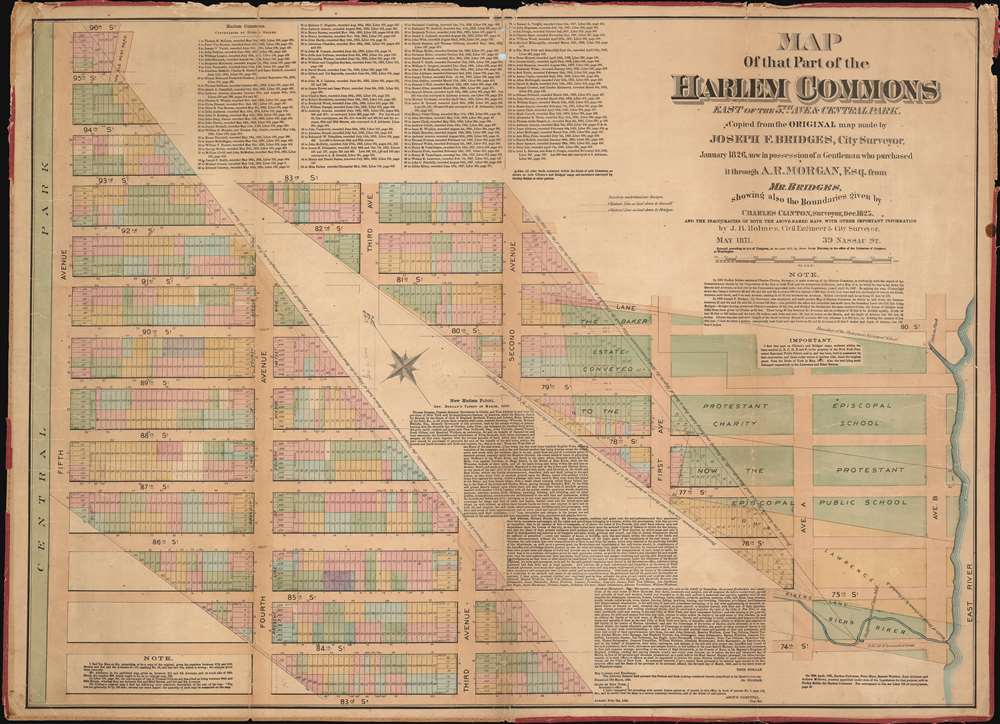 Highlights part of the evolving relationship between New York City and Harlem.
$3,500.00

This is a John Bute Holmes 1871 cadastral map of the Upper East Side in the borough of Manhattan in New York City. Constructed in an unusual manner, the map depicts the Upper East Side along a diagonal that stretches from Ninety-Sixth Street and Fifth Avenue to Seventy-Fourth Street and Avenue B. New York's now famous grid system acts as the base, along with the lots that were created by the 1811 Commissioner's Plan, which allows the neighborhood's evolution to be illustrated. One such detail is Fourth Avenue. Here, dashed lines mark the present sides of the avenue, several feet into the lots on either side. A large former estate is illustrated between Eightieth Street and Seventy-Eighth Street.

We have found a reference to the sale of the Harlem Commons in 1825, although we have been unable to unearth any concrete details about this event. Based on a close examination of the map, it seems likely that the Harlem Commons were sold by the then-independent city of Harlem to New York, which is why this map was commissioned. This may also explain the extremely strange diagonal design, because the border between New York and Harlem was a diagonal for much of its existence before Harlem was annexed by New York City. What we have managed to unearth about the Harlem Commons, which was very little, suggests that this land was used for the communal grazing of livestock when Harlem was still made up largely of rural farms and estates. The 1825 sale may simply have been a shift toward a more urban existence in Harlem and wanting to get the most out of the land before the city was annexed.

This map was created and published by John Bute Holmes in 1866. Three examples are recorded in the OCLC as being part of the institutional collections at Princeton University, the New York State Library, and the University of Wisconsin - Milwaukee. Although uncatalogued, we believe that the New York Public Library also has an example.