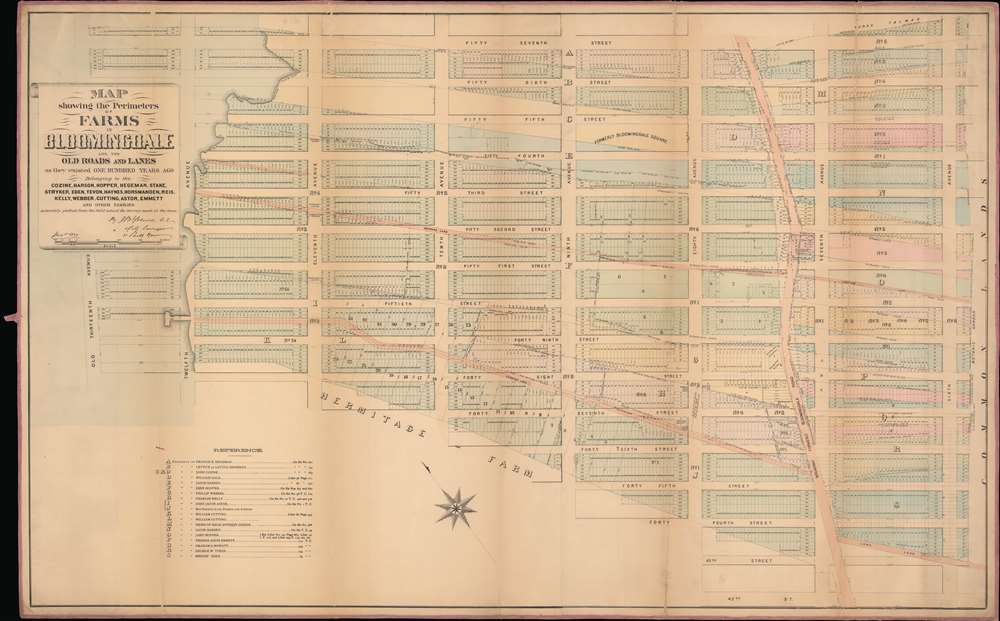 Includes the planned Thirteenth Avenue, which was never built above 26th Street.

This is a John Bute Holmes 1879 cadastral map of Midtown West including Times Square and part of the Theater District. The map depicts the region from the Hudson River to Sixth Avenue and from 57th Street to 42nd Street. Highly detailed, individual lots throughout the neighborhood are numerically identified, while the farms, roads, and lanes that existed in 1779 are both referenced and occasionally superimposed over the 1879 survey. A reference key situated in the lower left corner, lists the land owners, the letter used on the map that is associated with their property, and the references Holmes used when creating the map.

In an effort to increase Manhattan's river-front property, the New York State Legislature passed a law in 1837 to extend Manhattan's western shore further out into the Hudson River. This project ran along a line created in the Hudson from Hammond Street (today's West 11th Street) to 135th Street and soon was designated Thirteenth Avenue. The city immediately began selling underwater lots to individuals, who then had to follow the city's instructions on how to landfill and develop the lots. This effort was, ironically, sunk for the same reason that it was started: the desire to have New York be one of the world's premier harbors. Within two decades, the legislature had reversed course and outlawed landfilling over 100 feet from Twelfth Avenue, because of the advent of massive luxury liners and the need to build bigger piers to accommodate these vessels, forcing the lots that had been landfilled to be sunk once again. In 1883, only about a dozen blocks of Thirteenth Avenue remained, which The New York Times called 'a west side thoroughfare of little account'. Today, only one block of Thirteenth Avenue remains, although it is unmarked. It is known as the Gansevoort Peninsula and is located between Gansevoort Street and Little 12th Street along Eleventh Avenue across from the Whitney Museum of American Art. It is planned to be transformed into a new city park to open in 2022.

This map was created and published by John Bute Holmes in 1879. It is of considerable rarity. The OCLC identifies only one example at the New York State Library. Although uncatalogued, we believe the New York Public Library may have an example.