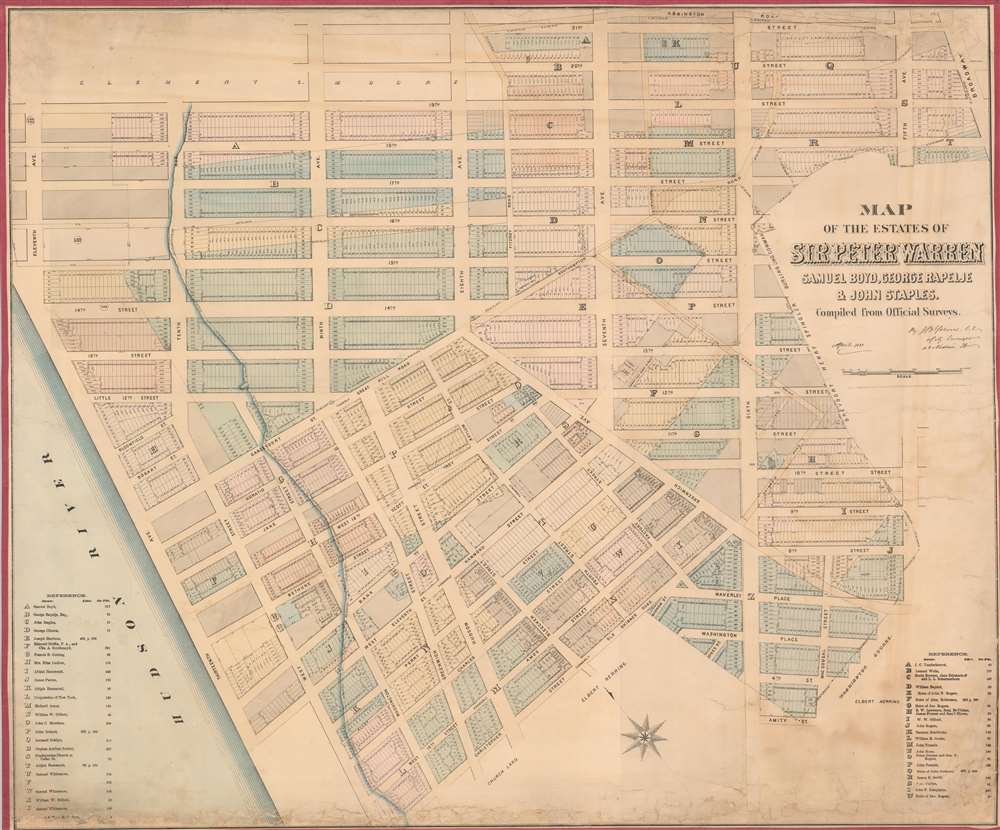 This is John Bute Holmes's rare 1881 cadastral map of Greenwich Village, or more properly the West Village, New York City. This is one of the earliest, if not the earliest, specific published maps of the West Village, including the Meatpacking District and southern Chelsea. Coverage extends from roughly Christopher Street to 21st Street and from the Hudson River to Broadway. Washington Square Park appears in the lower right corner and Broadway at the far right. Reference tables in the lower right and left corners reference deeds and other property documents on file with the city Clerk's office.

The map mentions several historic estates, among them the estates of Peter Warren, Samuel Boyd, and Joris Rapelje. Sir Peter Warren's estate was the largest, comprising nearly 300 acres of what is the modern-day Greenwich Village. Her he built his family estate, Warren House, in 1741. The map also covers the estate of Samuel Boyd, a prominent lawyer and Federalist who, along with Alexander Hamilton, founded the New York Evening Post. The Rapeljes were among the earliest Dutch founders of New Netherland with the family patriarch, Joris Rapelje, settling New York in 1624.

In the early 19th century most of Manhattan was undeveloped farm lands, the property of wealthy landowners with claims dating to the Dutch period of New York's history. The northern two thirds of Manhattan was dotted with farm lands and sprawling gentlemanly estates, many with great manor houses overlooking the Hudson River. The Commissioner's Plan of 1811, and the 1807 Commission Law, laid the street grid through many of these properties and gave the city the right to claim these lands under eminent domain, providing compensation to the landowners. While this work occurred early in lower Manhattan, central and upper Manhattan were not formally acquired by the city until the mid-19th century.

This map was laid out and published in April of 1881 by John Bute Holmes. Like most Holmes maps, this map is today exceedingly rare. There are only two examples cited in the OCLC, at the University of Wisconsin and the New York State Library. We are aware of a 3rd uncatalogued example at the New York Public Library, at one in private hands.

Very good. Re-mounted on linen and fully stabilized. Some areas of infill with slight loss, and some manuscript reinstatement of margin.