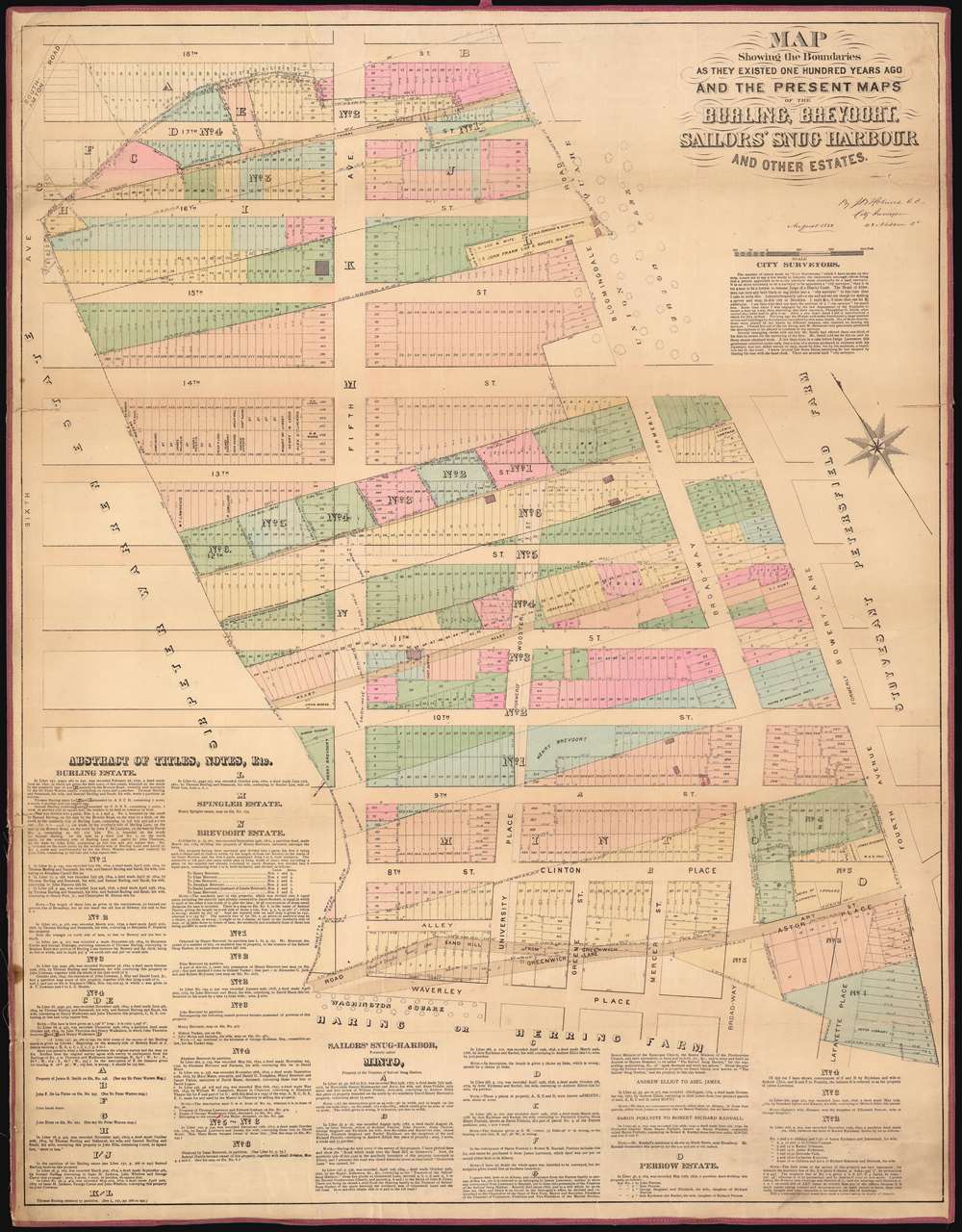 This is a John Bute Holmes 1882 cadastral map of eastern Greenwich Village, one of New York City's most famous neighborhoods, the cradle of the LGBT movement, and the home of New York University. The map depicts the neighborhood from Sixth Avenue to Fourth Avenue and from 18th Street to Waverly Place and Washington Square Park. Highly detailed, Holmes visually conveys the history of the development of this part of Greenwich Village, with the original lots illustrated in dotted lines superimposed over the street grid and the much smaller lots that make up the city blocks. Each lot within each city block is identified numerically. A brief history of the ownership of estates and other tracts in the neighborhood is printed on the map along the left side and the bottom.

Captain Robert Richard Randall(1750 - 1801) was an American sailor who amassed an impressive fortune capturing prizes on the High Seas. Randall purchased the former Elliot estate in then-rural Greenwich Village in 1796 following his father's death. The now-Randall estate comprised 24 acres between today's Fourth and Fifth Avenues and Waverly Place and Ninth Street. Randall, in his will (drawn up by Alexander Hamilton), established what became known as 'Sailor's Snug Harbor', a home for retired sailors, and arguably the first charitable organization in the United States. After Randall's death, the children of his half-brother challenged his will in court, and the court sided in favor of Sailor's Snug Harbor. The organization decided that, instead of occupying the land in Manhattan, they would subdivide it and lease it out, since the area was becoming more and more popular with the elite. Sailor's Snug Harbor used the money from its Greenwich Village leases to acquire 160 acres of land on Staten Island in 1831 to fulfill the stipulations in Randall's will.

This map was created and published by John Bute Holmes in 1882. It is of considerable rarity. The OCLC identifies only 3 examples: at Princeton, the New York State Library, and Harvard. Although uncatalogued, we believe the New York Public Library may have an example.