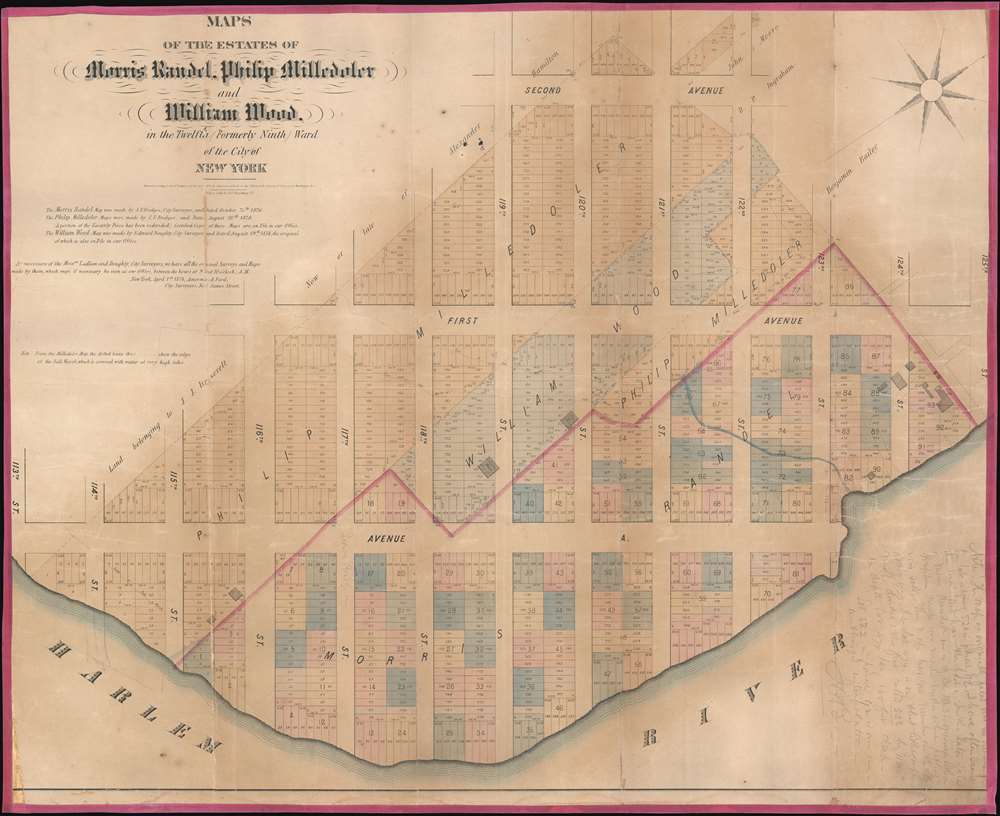 A rare cadastral or property map of northeastern Manhattan, New York City, between Second Avenue and the Harlem River, and from 113th to 125th Streets. This area is today generally considered part of Spanish Harlem. The map employs color coding to define the limits of the former estates belonging to the Swiss-American Philip Milledoler (September 22, 1775 – September 22, 1852, 5th president of Rutgers College/University), William Wood (1777 - 1857, businessman), and Morris A. Randel.

Certain enterprising surveyors and mapmakers, most notably John Bute Holmes, but also as here Amerman and Ford, became fascinated by the early history of Manhattan real estate ownership, recognizing the wealth to be accrued by accurately understanding the history of city land ownership, division, and inheritance. Many allied themselves with the corrupt Tweed administration, assuring themselves wealth and political power from the eminent domain seizure of old Manhattan estates. Reminiscent of John Randall's 'Farm Maps', these maps were overlaid with property data, showing the borders of old estates, and notating the breakup of the lands among various heirs. The complex work of compiling the maps earned the mapmakers fortunes, with one newspaper suggesting some such maps were worth more than 30,000 USD.

This map was prepared by Amerman and Ford, former city surveyors acting in a private capacity. It was engraved and lithographed by Miller's Lithography, 137 Broadway. Extremely rare. We have identified only three other known examples, all part of institutional collections.

Richard Amerman (September 1, 1824 - October 6, 1893), sometimes spelled Ammerman, was a New York based surveyor and lawyer active in the late 19th century. Amerman was born in New York City. He was drafted in New York to fight in the American Civil War. In the 1870s, Amerman partnered with another city surveyor, Francis W. Ford (1846 - 1904), who he trained from 1864, to compile and publish cadastral property maps of New York - a lucrative profession in a time when old estates were being seized under eminent domain and redeveloped into property lots. When Amerman died in 1893, Ford took over the business, running it under his own name. Amerman is buried in Greenwood Cemetery, Brooklyn. Learn More...


Francis W. Ford (July 1846 - February 3, 1904) was a New York City based civil engineer and surveyor active in the late 19th century. Ford was born in the lower part of Manhattan, New York City. Ford began his career as a civil engineer in 1864, a just 18, when he took a position under Richard Amerman (1829 - 1893, aka. Ammerman), who trained him in surveying. He later partnered with Richard Amerman sometime in the 1870s to compile and publish cadastral property maps of New York in the 1870s - a lucrative profession in a time when old estates were being seized under eminent domain and redeveloped into property lots. After Amerman passed in 1893, the business continued as Francis W. Ford and Sons well into the 20th century, eventually bringing his sons Frederic C. Ford, Francis W. Ford Jr., and Harold Ford into the business. Francis W. Ford, his eldest, died just two years after his father in a freak car accident. Francis lived at no. 5 Mount Morris Park West, in Harlem. His home still stands and has been divided into condos. Learn More...