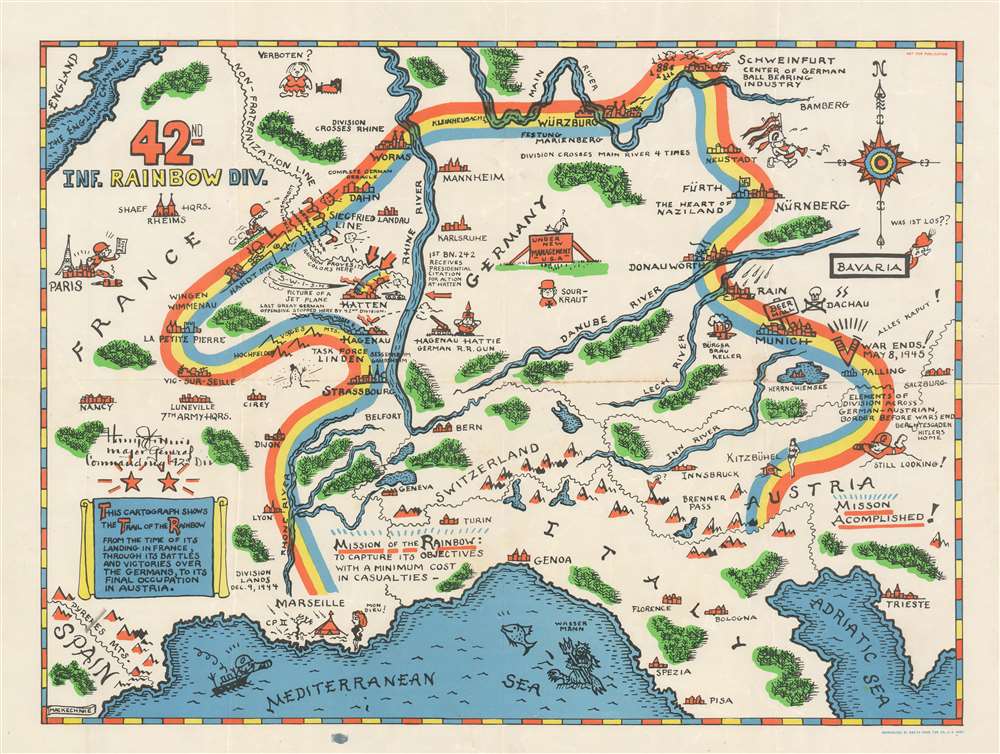 Employs a rainbow to trace the route of the 42nd Infantry 'Rainbow' Division through Europe during World War II.

Created by Theodore MacKechnie, a veteran of the 42nd Infantry Division, this 1945 pictorial route map traces the path of the 42nd from its landing at Marseille on December 9th, 1944, until its arrival Austria in Austria after serving 106 days in combat. A wonderfully comic depiction of an incredibly serious subject, MacKechnie used the division's nickname, 'Rainbow', to inspire his depiction of their route across Europe.

The Map's Details - A Contrast of Combat and Humor

Key battles and other events in the division's drive toward victory are interspersed with comical vignettes which, along with the bright colors, lend an air of lightness to this astonishing piece. A soldier celebrates receiving a 3 day pass to Paris (of course marked by the Eiffel Tower), and a snowman in the Vosges Mountains are illustrated next to the division's hard fighting at Hatten, when the 42nd and the rest of Task Force Linden repulsed repeated German counterattacks during the 'Operation Northwind' offensive, the last major German offensive of World War II on the Western Front. It was during the fighting around Hatten that Private First Class of the 242nd Infantry earned the Medal of Honor after a 48-hour defense of the Command Post. Hatten was also the site of fierce fighting experience by the 222nd Infantry Regiment, which engaged furious German attacks for twenty-four hours, but the Germans never broke through the 222nd's lines, for which the 222nd was awarded the Presidential Unit Citiation. Other comic elements, such as a 'sour-kraut' and a sign in Germany that reads 'Under New Management - U.S.A' are present as well.

Fraternization between American soldiers and European women, a common theme found in maps of this genre and not something to be taken lightly, appears in several different places. A redhaired French woman appears next to the division's command post in Marseille with the words 'Mon Dieu! (My God!) next to her. A woman in bedclothes stands next to a bed across the 'non-fraternization line' with the word 'Verboten? (Forbidden?) appearing above her head. And lastly, after the long journey from Marseille to Austria, a G.I. is illustrated watching a woman in a bikini near Kitzbühel, a fashionable mountain resort, with the caption 'Still Looking!', which implies that the soldiers, even though fraternization was officially forbidden, didn't necessarily follow orders.

More Combat and the Liberation of the Dachau Concentration Camp

Even with the perhaps necessary comic distractions, MacKechnie traces the 42nd's progress in detail. The map notes that the division crossed the Rhine (an important landmark for almost all American soldiers) at Worms and then crossed the Main River four times, going on to capture the cities of Würzburg, Schweinfurt, and Fürth in April 1945. The 42nd entered the Dachau concentration camp, marked here by a skull and the distinctive insignia of the SS, on April 29, 1945. The 42nd, which arrived at the camp at the same time as the 45th Infantry and the 20th Armored, helped liberate over 30,000 prisoners from the camp.

The 42nd Infantry Division became known as the 'Rainbow Division' shortly after its organization following the United States' entry into World War I. After the U.S. declared war, many National Guard units were federalized to help build up the Army (the same happened in the months following the declaration of World War II in December 1941). Douglas MacArthur, then a major in the Army, suggested that a division be formed from non-divisional units from multiple states. In so doing, MacArthur supposedly stated that the division would 'stretch over the whole country like a rainbow'. MacArthur's statement was put to use, and he was promoted to colonel and made the new division's chief of staff. The division's distinctive arm patch also has its roots in World War I, when soldiers modified the original patch, a half-arc rainbow, into a quarter-arc to commemorate the half of the unit that was lost due to casualties in World War I.

This map was created by Theodore MacKechnie and reproduced by the 666th Engineer Topographic Company of the U.S. Army. This map was created by MacKechnie, a member of the 42nd Infantry, for his fellow soldiers and was 'not for publication'. The OCLC records this map as appearing in one institutional collection, at the Wisconsin Veterans. Museum Research Center in Madison, Wisconsin, and it is also part of the David Rumsey Map Collection and the collection at Yad Vashem The World Holocaust Remembrance Center in Jerusalem.

Theodore Ross MacKechnie (1923 - August 25, 2012) was an American artist and soldier. He served in the 42nd Rainbow Division of the U.S. Army during World War II and continued to serve in the Army after the war and retired in 1969. After retiring from the Army, he worked as a broker with Yorktown Realty in Falls Church, Virginia, until 1975. After this second retirement, MacKechnie pursued his lifelong passion for painting and served as president of the Potomac Valley Watercolor Society and the Springfield Art Guild. He married Diana von Wagner-Freynsheim with whom he had two children. Learn More...