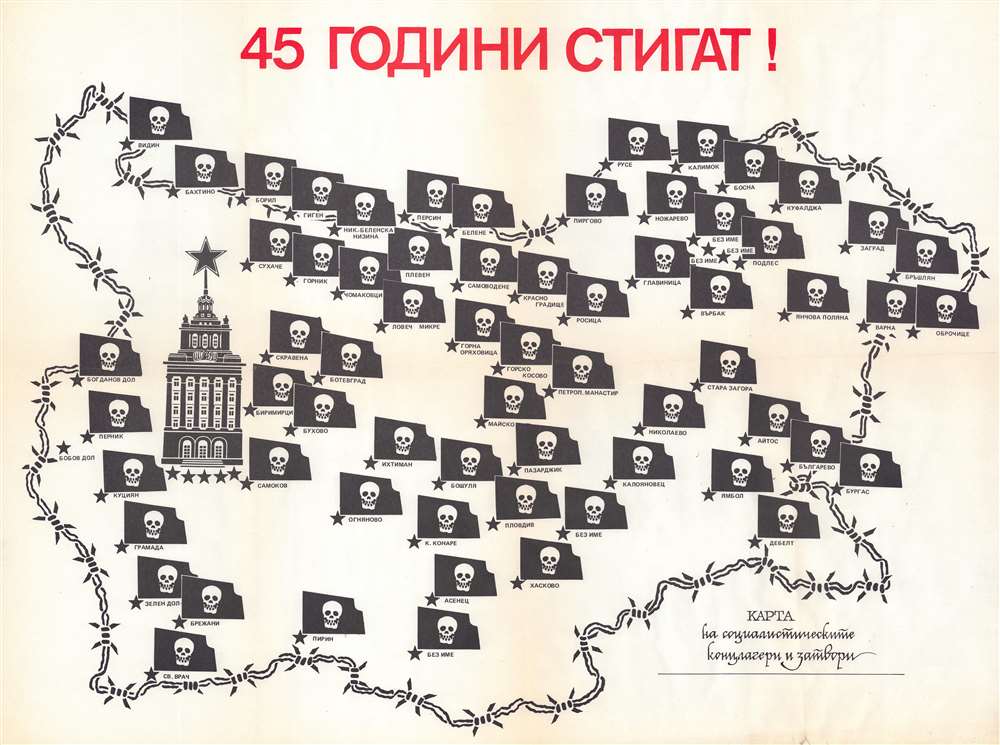 Created by Dimitar Tomov, this 1989 map of Bulgaria highlights the network of forced labor and concentration camps throughout Bulgaria in the second half of the 20th century. The camp network was perpetrated by the Communist regime which was in power between 1944 and 1989. Forced labor camps are marked by black stars and black flags bearing grisly white skulls. Each camp is identified by name in Bulgarian, including many of the most infamous, such as Belene (Белене), Lovech (Ловеч), and Bobov Dol (Бобов дол). The former headquarters of the Bulgarian Communist Party marks Sovia (Sofia), Bulgaria's capital. The five stars below the building suggest that five separate camps operated within Sofia.

Todor Zhivkov and Communism in Bulgaria

Todor Zhivkov (September 7, 1911 - August 5, 1998) was the de facto leader of Bulgaria from 1954 until 1989 when he was the General Secretary of the Bulgarian Communist Party. He was the second longest-serving leader of any Eastern Bloc country after World War II and ranks among the longest serving non-royal leaders in modern history. Moderate elements within the Bulgarian Communist Party forced Zhivkov to resign on November 10, 1989, in an effort to maintain power in the face of a strong campaign for political reform. The reform campaign never ended, and multi-party elections were held in Bulgaria in June 1990, the first since 1939.

As was the case in other Eastern Bloc countries, a system of forced labor and concentration camps operated in Bulgaria from 1944 until 1989. Estimates of the number of those imprisoned vary wildly, with some reaching well over one hundred thousand. Tens of thousands were tortured and killed. Those imprisoned varied from pimps, beggars, and blackmailers, to political threats. After the fall of the Communist regime, a special commission was organized by the Bulgarian government to investigate the camps, which were not made public until March 1990.

This map was drawn created by Dimitar Tomov and used by the Union of Democratic Forces during the 1990 election campaign. An example is part of 'Persuasive Maps: The PJ Mode Collection' at Cornell University. Another example is part of the collection at George Washington University. This piece is not cataloged in OCLC.

Dimitar Georgiev Tomov (Димитър Георгиев Томов) (b. October 29, 1957) is a Bulgarian author. He graduated with a degree in Bulgarian Philology from the Faculty of Slavic Philology and Law at the Faculty of Law of Sofia University. He has been the director of the Sofia University Publishing House 'St. Kliment Ohridski' for twenty-five years. He published his first book, Alien, in 1985, with subsequent works appearing in 1990 and 1997. He released several collections of short stories during the 2000s. He was awarded the Yordan Yovkov Award for overall fiction and storytelling in 2010 and in 2016 he received the Georgi Karaslavov National Literary Award for his entire oeuvre. Tomov is a member of the Union of Bulgarian Writers. He was imprisoned under the Communist regime. He is married and has three children. Learn More...

Cornell University, Persuasive Maps: PJ Mode Collection 2113.01. Union of Democratic Forces, '45 Years is Enough!' Making the History of 1989, Item #657.
Looking for a high-resolution scan of this?